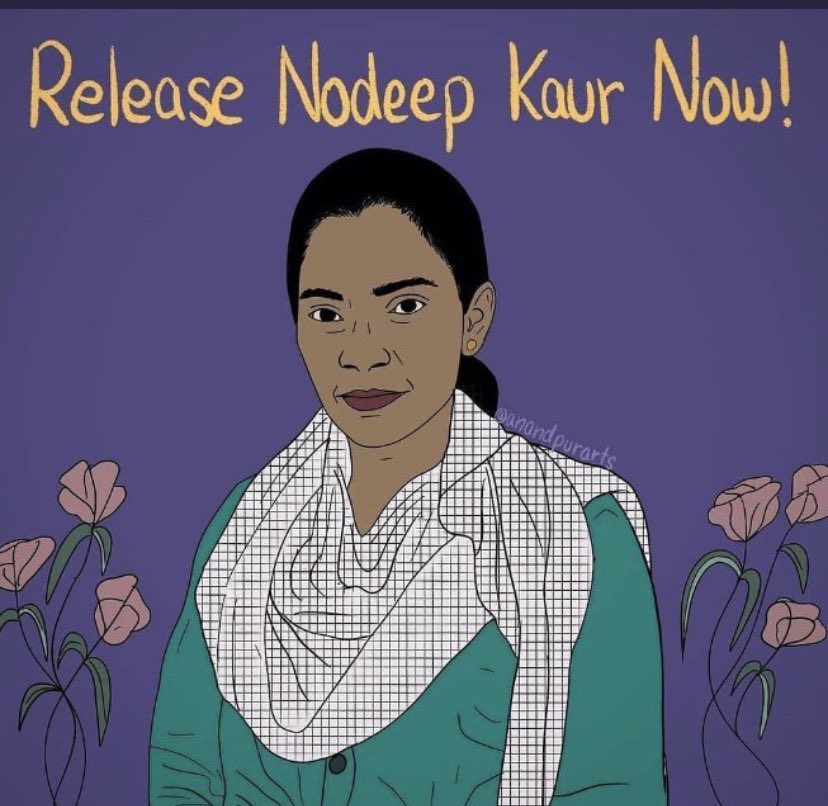 On January 12, 2021, two FIRs were lodged at Kundli Police Station, against Ms. Nodeep Kaur and other workers. One FIR (25) was registered by police and another FIR registered (26) by Mr. Lalit Khurana, Accountant at Elecmech Pvt. Ltd. Kundli.

FIR number 25 was registered by the police under sections of IPC 148-Rioting, armed with deadly weapon, 149-Every member of unlawful assembly guilty of offence commit-ted in prosecution of common object, 332-Voluntarily causing hurt to deter public servant from his duty, 353-Assault or criminal force to deter public servant from discharge of his duty, 186-Obstructing public servant in discharge of public functions, 384-Punishment for extortion,
379B-Snatching with hurt, wrongful restraint or fear of hurt, 307- Attempt to murder.

The police narrative according to the FIR number 25 is that they were informed that workers armed with rods and batons were creating nuisance outside the company and attempting
to extort money, hence they rushed to the protest spot and Ms. Nodeep Kaur and her 40-50 aids attacked on the police team with the malicious intention of taking revenge forprevious FIR, which was registered against MAS members and Nodeep on December 28,
2020.

According to FIR 26, on January 12 at 11 am, 40-50 people entered
Elecmech Pvt with 3-4 women and started asking for recovery of Money. When the company refused to give money, they started fussing. The guards let them out of the company and called the police. When the police arrived, the workers assaulted the policemen with sticks due to which police personnel also got hurt. One of them called her name Nodeep and fled threatening to kill the accountant.

According to Ms. Nodeep’s conversation with her sister on January 13, 2021, after taking er to the police station she was subject to custodial torture as she was beaten first by the male policemen, then by female policewomen with sticks. Ms. Nodeep Kaur family appealed to the magistrate for an MLC on January 14, 2021 and medical was done on January 25,2021 Her sister Rajveer Kaur, who visited her in jail said that Nodeep has been brutally assaulted in custody by male police officers and has injuries on her private parts. Their lawyer said that the medical reports confirmed the same.

It is our firm belief that the Haryana police acted in complete violation of Indian Constitution,multiple national and international human rights norms, as well as wrongful arrest procedures in noncompliance with the DK Basu Guidelines of arrest. According to the DK Basu guidelines, an arrest memo must be given at the time of arrest and one family member
informed which was not done by the police. Guideline 8 says that a medical examination must be done of the detainee within 48 hours, but the police were in violation of this and an MLC was done only when the family of Ms. Kaur met her and were shocked to see injuries on her body.

We also note with shock the allegations of the young woman being subject to custodial torture and assault on her private parts in the police custody. The DK Basu guidelines clearly state that the detainee has the right not to be ill-treated or tortured during arrest or in custody. Torture is banned by India and the international human rights law.

The Supreme Court in one of the recent orders ( Paramvir Singh Saini v. Baljit Singh & Ors.,SLP (Criminal) No. 3543 of 2020) has held that in case a victim during an interrogation by any of the agencies like Police, CBI, NIA, ED etc., has a right to obtain the CCTV footage if there is any human right violation faced by the victim. The victim can approach the National/State Human Rights Commission, Superintendent of Police or Human Rights Courts. Further every interrogation room should have CCTV’s installed. Thus it is essential that CCTV footage of the interrogation of Ms. Nodeep is given to the NHRC.

There are also other questions – why was no cognisance taken of the workers complaint regarding the firing on December 28?

Why is there contradicting evidence as to whether bullets were fired or not on December 28 at the protestors? We believe that the Haryana police has indulged in serious abuse of power at the behest of vested interests.

The Hon’ble Commission should urgently:

• Direct its independent investigation wing to conduct an immediate, thorough,transparent, effective and impartial investigation into the above-mentioned incident of illegal arrest, detention, inhuman treatment, custodial torture and assault of Ms.
Nodeep Kaur by the police personnel of Kundli police station and submit a report to the Hon’ble Commission within 2 days.

• Order all the relevant CCTV footages, including that of the interrogation of Ms.Nodeep Kaur and file a report within two days to the Hon’ble Commission.

• Direct the Director General of Police of Haryana to initiate strict and immediate legal action on the perpetrators subject to the investigation report, in this case the Superintendent of Police of Sonipat for negligence, Mr. Ravi Kumar, Station House
Officer, Kundli Police Station, and other police personnel of Karnal and Kundli PS who indulged in custodial torture.

• Ensure that all charges on WHRD Ms. Nodeep Kaur are withdrawn and the defender is not harassed or intimidated or falsely implicated in future and give this assurance
to the NHRC of India in writing immediately and urgently.
• Direct the Superintendent of Police of Sonipat to submit a report on non-registration of FIR despite letters from Ms. Nodeep and her co-workers.
• Guarantee in all circumstances the physical and psychological integrity and security of WHRD Nodeep Kaur who is still in jail.
• Ensure provision of reparation, compensation, apology to the defender for the physical and psychological sufferings he underwent because of the physical assault,ill-treatment and custodial torture and provide a re-assurance of not engaging in such acts.
• Take steps to conform to the provisions of the UN Declaration on Human Rights Defenders, adopted by the General Assembly of the United Nations on December 9,1998 which recognizes the legitimacy of the activities of human rights defenders,
their right to freedom of association and to carry out their activities without fear of reprisals.

Raped 27 yrs ago, woman lodges complaint after son asks father's name
Massive Protests in Four US Cities Against Hindutva Intolerance
Rajasthan: Unable to study engineering, woman kills self #Shameofindia
Who cares about Modi's model village scheme? Not even his ministers