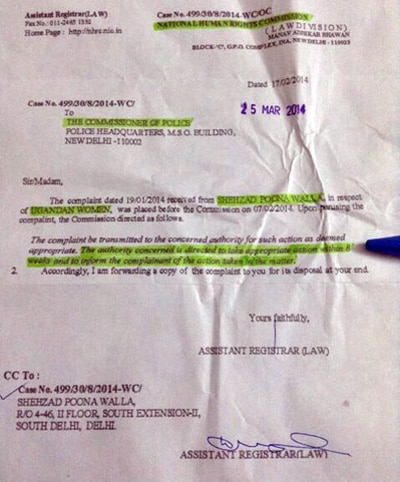 Activist-lawyer Shehzad Poonawala had petioned against Bharti. A judicial probe had indicted former Delhi law minister for his action.

Bharti had gone to Khirki Extension with a group of party volunteers and local residents where he claimed that a drug and prostitution ring was being run by some Ugandan women. Bharti had initially asked the police to raid the house. When the police refused saying they did not have warrant to do so, he led the mob on the raid. Delhi Police had registered a case in the matter on January 19 against unknown persons. A Ugandan woman had later filed an FIR in the case and identified Bharti. The BJP and the Congress had demanded immediate removal of Bharti from office, but the ruling Aam Aadmi Party supported him and said it would wait for the report of the judicial probe before taking any action.   Read more here – http://www.hindustantimes.com/india-news/nhrc-directs-delhi-police-to-take-action-against-somnath-bharti/article1-1202445.aspx