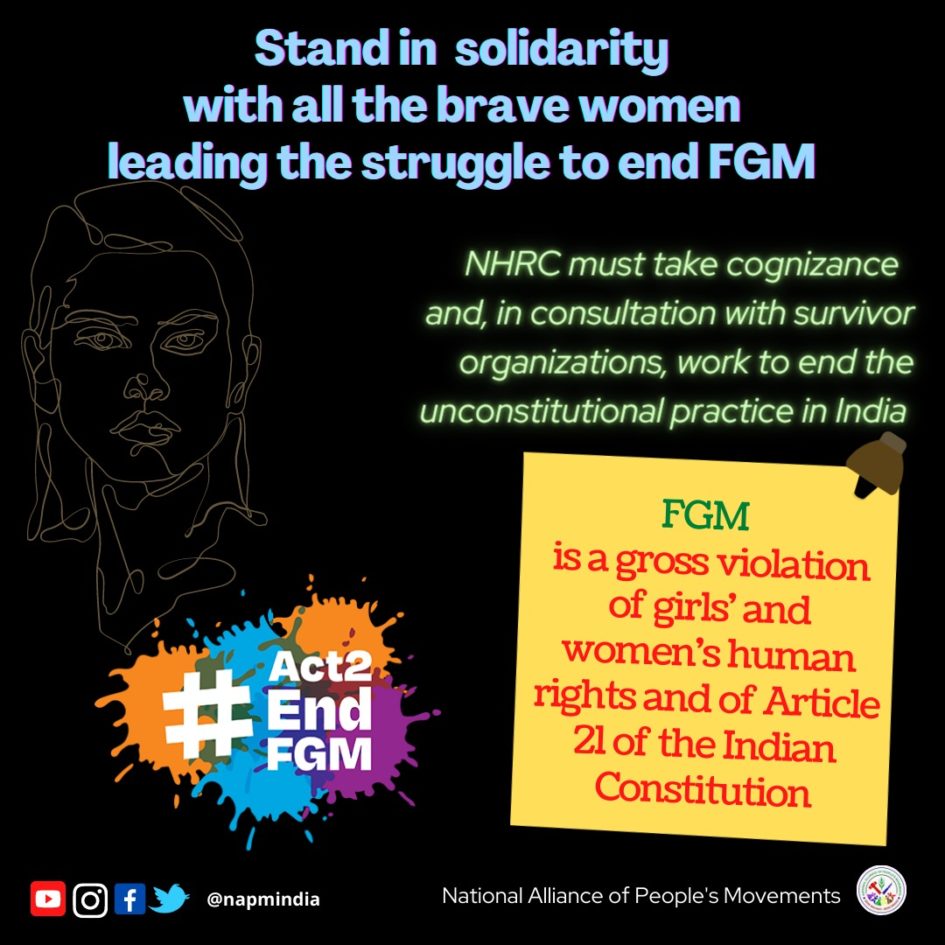 , in consultation with organizations campaigning against it
NAPM stands in solidarity with women leading the struggle to end the practice of female genital mutilation (FGM) in India

9th February: As we mark the International Day for Zero Tolerance against female genital mutilation (FGM) this week (6th Feb), NAPM expresses solidarity with and support to all the women fighting this deeply discriminatory and harmful practice. In India, the struggle against FGM or khatna has been led from the front by community-based groups like WeSpeakOut and Sahiyo, who have braved many odds to build consciousness, perspective and campaign around an issue that is so often ignored. We acknowledge their significant work in a climate where the lack research and data, and the lack of legislative support to ban the practice, accompanied by the taboo around talking about FGM, make it extremely difficult to address it culturally or legally. This makes it necessary to address multiple aspects simultaneously:

Female Genital Mutilation (FGM) or Khatna is a cultural practice involving the partial or total removal of the external female genitalia or other injury to the female genital organs for non-medical reasons. It is practiced in different forms in various parts of the world[1].

FGM harms girls and women, as it involves removing and damaging healthy genital tissue in the absence of the person’s wish or consent, frequently at an age where consent is impossible. Depending on the type of FGM practised, it can interfere with physical and physiological functions of the bodies.

FGM is often done without anaesthesia, and without medical supervision and sometimes the procedure can go horribly wrong. It often leads to pain, shock, tetanus, genital sores, excessive bleeding, among other immediate harmful effects. Because of the silence surrounding the practice, medical access to address these also becomes impossible. FGM also has long-term psychological impact on the survivors, ranging from sexual disorders, fear of sexual intimacy, nightmares, and post-traumatic stress disorders.

FGM in India: A Cultural Practice

Worldwide 200 million girls go through different forms of FGM. In India, FGM is practised by the Bohra (Dawoodi, Sulemani and Alvi) community, though exact data on the practice does not exist. While the Bohras are recognized as being amongst the most educated and affluent of the Muslim communities in India, they are the only ones to continue this unacceptable practice. Bohra girls are often mutilated surreptitiously and in a clandestine manner as children at the age of 7, under the pretext of ‘ensuring religious purity’.

Many contradictory arguments are made to continue the practice. Some say the practice ‘reduces the sexual promiscuity of women’, while others say it ‘enhances their sexual experience’. Others yet think of it as a religious practice. However, FGM does not find a place in any religious text. It is a cultural practice passed on through generations, which does not have any health benefits or enhance sexual experience, as per current scientific studies.

Most women from the community cannot justify the need for the practice and many oppose it. However, there is a strong fear of ostracization, social boycott and exclusion from the family or community, especially as the Dawoodi Bohra community, largest of the Bohra groups, follows the word of the clergy who has on separate occasions promoted the practice for girls. While the ones involved directly in getting the procedure done are the women, backing it up are men in positions of power and ingrained patriarchy.

WHO classifies FGM as an extreme form of discrimination against women and a violation of the human rights of girls and women, reflecting gender inequality. It is almost always conducted on minors and is thereby a violation of the fundamental rights of children. In December 2012, the United Nations General Assembly adopted a unanimous resolution on the elimination of FGM. It declared 6th February as a day of zero tolerance on FGM.

Across the world, FGM is being banned in many countries. Nigeria and Gambia made FGM a criminal offence after women campaigned against it. FGM is banned in 20 countries in Africa. However, the Indian government does not recognise the existence of the practice in the country. The Government of India, in a submission to the Supreme Court said, “There is no FGM is India”. The lack of evidence or data on FGM enabled the government to choose to ignore the reality of the practice. Individuals and groups in India continue to make attempts for legislative change to end the practice which violates constitutional rights.

At the same time, there is deep faith in the ability of the community to change and reconsider the violent, discriminatory patriarchal roots of the practice and end it. Numerous efforts are made to dialogue with everyone from the community and continuously challenge misconceptions regarding the practice. Women from within the community are also very cognizant of the majoritarian times we are living in and are therefore cautiously, yet responsibly, campaigning for an end to this practice, even as they resist attempts at vilification and criminalization of the community and families.

Silence, Lack of Research and Data

The denial of the prevalence of this practice by the State has a direct bearing on the absence of research and data, making both legal efforts and dialogue with the community difficult. Women and groups fighting against the practice also continue to try to build the necessary research and understanding, and enable the support for these.

Lack of Support for Survivors

Some women have shown immense courage in speaking out. In particular, WeSpeakOut and Sahiyo are groups that are working towards eliminating FGM in India. They conduct outreach programmes and provide space for survivors of the practice to come together, sometimes for the first time in a space where they can talk about their bodies, experience and trauma without shame. The recent presentation by survivors and activists Masooma and Sakina, at a virtual event organized by NAPM sheds more light on the many layers of the issue and the need for more solidarity. View at: https://youtu.be/n8vpUhAoDUg

National Alliance of People’s Movements (NAPM) stands in solidarity with all the women fighting against this practice at great personal cost. We unequivocally condemn the violation of children’s rights, women’s rights and human rights through the practice of FGM in India and abroad.

We support the demand for recognition of the existence of the practice in India, to enable allocation of budget for research and data collection, and for making medico-legal and other support services readily available for survivors, as well as for continuing the dialogue and the change within the community.

We stand with women of the community in their struggle to find the right resources, legal & other forms of support to end this practice in our lifetimes. India should ban the practice, not by prosecuting the families of girls and women, but by holding accountable those who promote it.

We urge NHRC to immediately take suo-moto cognizance of this practice which constitutes a grave violation of the human rights of young girls, and act to end the practice in consultation with the organizations leading this struggle.