#Nigeria- Silence is Treason ,Remembering Saro-Wiwa and other martyrs, #Mustread Ken Saro-Wiwa was born in 1941 as the eldest son in an Ogoni family. After leaving university he pursued an academic career and became the most outspoken environmental activist in the Niger Delta decrying the devastation of the land, air and water at the hands of rich corporations and complicit governmental authorities.

He was a writer, artist, journalist, and television producer and became the President of the Association of Nigerian Authors for three years until 1991, when he decided to devote himself entirely to the nonviolent struggles of his fellow Ogoni people.

He chose to fight using nonviolent resistance techniques such as poetry, prose and peaceful protest. Saro-Wiwa was able to mobilize the people of the Niger Delta to push for adequate representation and the preservation of their homeland, which was continuing to be destroyed by oil exploitation.

In 1994, Saro-Wiwa was given the Right Livelihood Award, often called the “alternative Nobel Prize”, along with three other environmental activists. The following year he was given the Goldman Environmental Foundation of California prize.  It didn’t take long before the Nigerian government felt their economic interest in oil exploitation was being threatened by the growing movement of Saro-Wiwa and his followers.

In May 1994, a meeting took place which broke out in violent confrontation, and four of the elders were killed. Even though Saro-Wiwa had been barred from attending the meeting, he and 8 other Ogoni leaders were held responsible and arrested. A trial took place, though independent and international witnesses claim the various circumstances surrounding the proceedings strayed from the laws outlined in the Nigerian Constitution and international human rights law. Accused of murder and without legal counsel nor right to appeal, Saro-Wiwa and the other 8 Ogoni leaders, Baribor Bera, Saturday Doobee, Nordu Eawo, Daniel Gbokoo, Barinem Kiobel, John Kpuinen, Paul Levura and Felix Nuate were hanged on November 10th, 1995.

In 1996, several environmental rights organizations and various human rights attorneys brought lawsuits against Royal Dutch Shell and the Nigerian head of Shell operations. The trial finally took place in 2009 in New York, under the Alien Tort Statute, a 200 year old statute rarely used but which makes it possible to address egregious violations of human rights in US Federal Courts that have occurred outside of the US. Following repeated efforts by Shell to have the case dismissed, each of which were rejected, an out-of-court settlement was finally agreed upon in June 2009.

Silence is Treason (Remembering Saro-Wiwa and other martyrs)

Dark clouds settled over Nigeria, eighteen years ago, on the tenth day of November. It was a mere ten days after being sentenced to death, and full twenty days to the expiration of the appeal period, the military junta of General Abacha executed Ken Saro-Wiwa, Saturday Dobee, Nordu Eawo, Daniel Gbooko, Paul Levera, Felix Nuate, Baribor Bera, Barinem Kiobel and John Kpuine.
Few believed that these men would be marched to the gallows.  Leaders of the so-called Commonwealth were meeting in Auckland, New Zealand at the time and the spotlight was on Nigeria. Certainly the pleas from these leaders would remove the mist from Abacha’s dark goggles. Alas, it was not to be. At a meeting of the Association of Nigerian Authors held at the University of Lagos writers debated whether to plead with Abacha or to confront and sternly warn him of the sequences of murdering Ken Saro-Wiwa and the other eight Ogoni leaders. Other Nigerian’s were glued on their picture boxes watching the national soccer team push the leather ball around on a pitch against Uzbekistan.
While the nation cheered the Super Eagles to victory the hangman struck.  The world stood still. Aghast. Silence reigned. But this was neither time for silence nor for apathy. And it has not been ever since. November 10 has become etched in history as a day of infamy. And of rage.
That day has become the Global Day of Remembrance of Martyrs of Environmental Justice. Environmental, social and other mass movements mark it as a day of solidarity against the impunity of the extractive sector companies and the juntas that back them. It is a day on which the struggle of Ken Saro-Wiwa and the Ogoni people is remembered. It has become a day of action with communities resisting fossil fuel extraction. Since 1995, November 10 has been marked as a day of solidarity with the people of Ogoniland and Nigeria as a whole as we continue to struggle against reckless extractive activities resulting in gross pollutions and destruction of lives and livelihoods.
With the world so firmly hooked on fossil fuels and ignoring all warnings that fossil fuels are causing globalburning, the companies operating in this field are engaging in more extreme extraction and more desperate attacks on resisting communities and peoples.  The examples are many.
Thirty Greenpeace activists are being held in the Russian Gulag simply because they sought to show what dangers drilling in the Arctic portends for the planet and humans.  They are being held for the benefit of the dirty energy company Gazprom. This company spends millions of dollars presenting an image of an extraordinary company promoting successful sports teams and cultural events. The truth is that they are actually extraordinary. Thirty persons of conscience are being jailed for the pleasure of one company. That is extraordinary.
Shell oil company held a watching brief at the kangaroo tribunal that sentenced Ken Saro-Wiwa, Saturday Dobee, Nordu Eawo, Daniel Gbooko, Paul Levera, Felix Nuate, Baribor Bera, Barinem Kiobel, and John Kpuine to death. That is a very extraordinary company.
Strikingly, 10th November marks the first anniversary of the uprising of the Idle No More movement of theindigenous communities of Canada and North Americas. These communities have been at the forefront of struggles against tar sands extraction as well as against fracking. Their struggle for environmental justice and dignity has resulted in heavy repression, including arrest of their leaders.
Currently the indigenous peoples of Ecuador are locked in a struggle to keep the oil in the soil in Yasuni ITT, a portion of the Ecuadorian Amazon that is reputed to be a biodiversity hotspot. The government of President Rafael Correa had some years ago offered to keep oil companies out of the area if other nations and institutions would offer Ecuador cash worth half of the value of the crude oil there. On 15 August 2013 he backed away from that promise citing a failure of the world to rise up to his demand. The peoples of Ecuador have refused to buy his argument and are currently engaged in huge mobilizations against this change of plan.
Today we stand in solidarity with the peoples of Ecuador, not forgetting the massive despoliation of their land by the activities of Chevron for which the oil company refuses to accept responsibility despite clear judicial judgment declaring it guilty.
We will not forget other ongoing struggles in the world against corporate impunity. We stand with the people of Turkana, Kenya resisting big oil in their territory. We also remember Mr Yul Choi, founder and president of Friends of the Earth South Korea who is languishing in jail for resisting the Three Gorges Dam in his country.
We salute the courage of the Grezi park protesters of Turkey whose stand against corporate efforts to appropriate a public park galvanized the nation to stand against the powers.
On this date we also stand in solidarity with Berta Caceres of Honduras, a brave woman who has fearlessly opposed a mega dam project in her country and has been sentence to a term in prison.
Eighteen years after the heinous crimes against the Ogoni people their complaints have been clearly vindicated. The horrendous devastation of their land, water and air has been vindicated by the assessment of their environment by the United Nations Environment Programme. The report presented to the government of Nigeria over two years ago is still begging for decisive action.  This report further confirms the guilt of a system that murdered Ken Saro-Wiwa and the other Ogoni leaders. And, today, the world awaits a simple apology from Shell and the Nigerian State, a quick dismantling of oil installations from Ogoniland, a comprehensive cleanup of Ogoni and the entire Niger Delta environment. 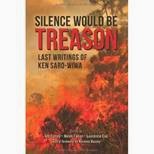 Ken Saro-Wiwa’s words declaring that Silence Would Be Treason has been captured in a book that has just come off the press.  We salute the Ogoni people for not keeping mute and not being cajoled to accept the horrors that have been visited on them.
Citizens of the world, it is time to stand up in solidarity with our fallen heroes. It is time to rise and defend human and environmental justice campaigners around the world. This is no time to be silent. Silence is treason!
Read more here- http://nnimmo.blogspot.in/

20 Million Muslims March Against ISIS and The Mainstream Media Completely Blacks Out
Policy for Mentally Ill Soon, Odisha Govt Tells NHRC
#India- Why the Food Security Bill is neither populist nor unaffordable
Death for dissent and disbelief