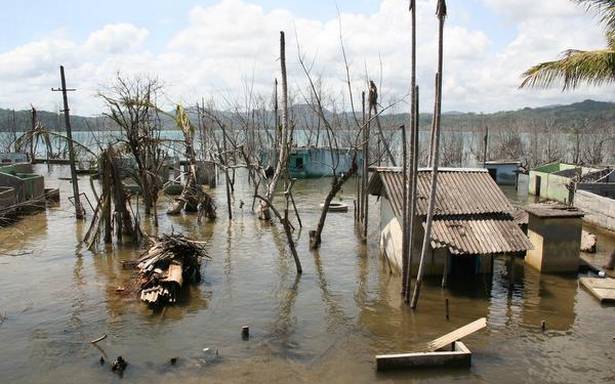 In what appears to a re-run of recent developments in Little Andaman Island (A bullet through an island’s heart, The Hindu, February 1), more than 150 sq. km. of land is being made available for Phase I of a NITI Aayog-piloted ‘holistic’ and ‘sustainable’ vision for Great Nicobar Island, the southernmost in the Andaman and Nicobar group. This amounts to nearly 18% of the 910 sq. km. island, and will cover nearly a quarter of its coastline. The overall plan envisages the use of about 244 sq. km. – a major portion being pristine forest and coastal systems.

Projects to be executed in Phase I include a 22 sq. km. airport complex, a transshipment port (TSP) at South Bay at an estimated cost of ₹12,000 crore, a parallel-to-the-coast mass rapid transport system and a free trade zone and warehousing complex on the south western coast.

What stands out prominently in the whole process, starting with the designation in mid-2020 of the Andaman and Nicobar Islands Integrated Development Corporation (ANIIDCO) as the nodal agency, is the speed and co-ordination with which it has all unfolded. The other is the centrality of the NITI Aayog. First, on September 4, 2020, the Director, Tribal Welfare, A&N Islands, constituted an empowered committee to examine NITI Aayog’s proposals for various projects in Little Andaman and Great Nicobar Islands. A copy of the 2015 ‘Policy on Shompen Tribe of Great Nicobar Island’ was part of the communication sent out, giving an indication of the aims of the committee.

Significant changes have also been effected to the legal regimes for wildlife and forest conservation.

In its meeting on January 5, 2021, the Standing Committee of the National Board for Wildlife (NBWL) denotified the entire Galathea Bay Wildlife Sanctuary to allow for the port there.

The NBWL committee seemed unaware that India’s National Marine Turtle Action Plan that was under preparation then (it was released on February 1, 2021) had listed Galathea Bay as one of the ‘Important Coastal and Marine Biodiversity Areas’ and ‘Important Marine Turtle Habitats’ in the country. It is included in Coastal Regulation Zone (CRZ)-I, the zone with maximum protection.

Then, on January 18, another Environment Ministry expert committee approved a “zero extent” Ecologically Sensitive Zone (ESZ) for the Galathea NP to allow use of land in the south-eastern and south-western part of the island for the NITI Aayog plan. The October 2020 draft notification for this zero extent ESZ had ironically listed out in great detail the park’s ecological uniqueness – that it is part of a UNESCO World Heritage Site, houses a range of forest types, has one of the best preserved tropical rainforests in the world, is home to 648 species of flora and hosts 330 species of fauna including rare and endemic ones such as the Nicobar wild pig, Nicobar tree shrew, the Great Nicobar crested serpent eagle, Nicobar paradise flycatcher and the Nicobar megapode. It also notes that the park is home to the indigenous Shompen community.

The notification says that an ESZ is needed to protect the park from an ecological, environmental and biodiversity point of view, but goes on in the very next para to propose a zero extent ESZ for nearly 70% of the periphery of the park.

It is almost as if the unique diversity of life just listed suddenly disappeared because of an arbitrary line drawn to allow a slew of high value projects.

This is illustrated in the case of the Giant leatherback turtle and the Nicobar megapode, two charismatic species for whom Great Nicobar is very important. The beaches here, like at the mouth of the river Galathea in South Bay are among the most prominent nesting sites globally of the Giant leatherback. It for this reason that the bay was declared a wildlife sanctuary in 1997, but has now been denotified to allow for the transhipment port.

In his 2007 study of the Nicobar megapode, the globally endangered bird unique to the Nicobars, K. Sivakumar of the Wildlife Institute of India documented 90% of this ground nesting bird’s nests to be within a distance of 30 m from the shore. He notes that the existing protected area network in Great Nicobar is not designed for the protection of the megapode and recommends that the entire west and southern coast of Great Nicobar – precisely the area sought for the NITI Aayog proposals – be protected for the megapode and other wildlife like nesting marine turtles. This is also in stark contrast to the current move to create a zero extent ESZ for the Galathea National Park.

Similar concerns exist about the impact on the Shompen community. The proposed project areas are important foraging grounds for this hunter-gatherer nomadic community and the official Shompen Policy of 2015 specifically noted that the welfare and integrity of these people should be given priority “with regard to large-scale development proposals in the future for Great Nicobar Island (such as trans-shipment port/container terminal etc.)”. Now, large forest areas here could become inaccessible and useless for the Shompen.

Available evidence suggests that issues of the geological volatility of these islands are also not being factored in. The December 26, 2019, tender document by WAPCOS Limited for a ‘Traffic Study for Creating Transshipment port at South Bay, Great Nicobar Island’ justifies the port here by noting that “the topography of the island is best suited, which has not been damaged much even by the tsunami on 26.11.2004 (sic)”.

Yet, a 2005 Earthquake Engineering Research Institute (EERI) Special Earthquake Report by a multi-disciplinary team from the Indian Institute of Technology (IIT) Kanpur, recorded witness accounts of 8-metre-high tsunami waves hitting the Great Nicobar coast on December 26, 2004. “The lighthouse at Indira Point, the southernmost tip of the Great Nicobar Island, which was on high ground before the earthquake,” the report notes, “is now under water, indicating a land subsidence of about 3-4 m.”

Loss of life and property then was limited because the Great Nicobar coast is largely uninhabited. This raises questions over safety of life, property and the investments in this zone and that too without accounting for the complex ecological, social and geological vulnerabilities here. Little, if anything, is also known of the NITI Aayog vision document itself – What is its rationale? What was the process of its creation? Which agencies/individuals were involved? What impact assessments, if any, have been done at all?

Neither the NITI Aayog nor the agencies that are facilitating it with zeal and efficiency have made this available.

(Pankaj Sekhsaria has been researching issues of the Andaman and Nicobar Islands for over two decades. He is also author of five books on the islands.)