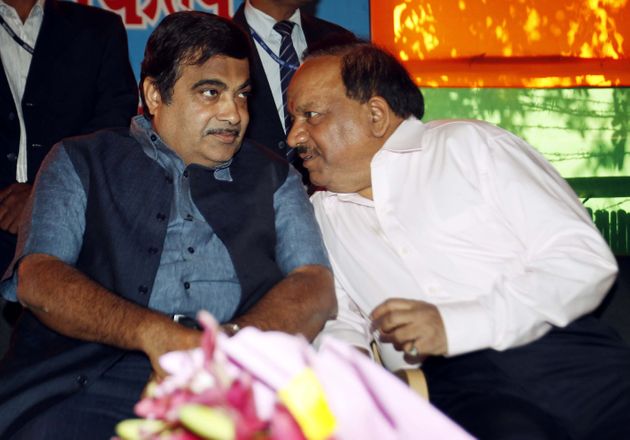 NEW DELHI — On 10 August 2018, the Supreme Court of India imposed damages of at least Rs 105 crore on Goel Ganga Developers (India) Pvt. Ltd for breaking environmental laws and to mitigate the ecological damage wreaked by the real estate company while constructing a residential and commercial project.

Goel Ganga, the Supreme Court said was “intransigent”, “unapologetic” and had “manipulated officials and authorities.”

Eight days later, Nitin Gadkari, the union minister for road transport and highways, wrote to the then environment minister, Dr. Harshvardhan, asking him to consider Goel Ganga Group’s request to effectively undo part of the Supreme Court’s judgement by reinstating an office memorandum issued by the environment ministry on 7 July 2017. Advertisement

The Supreme Court had struck down that particular Office Memorandum terming it “totally illegal”. Government departments use office memoranda, or OMs, to clarify specific laws or policies.

“We expect the officials of the Ministry of Environment, Forest and Climate Change to take a stand which prevents the environment and ecology from being damaged, rather than issuing clarifications which actually help the project proponents to flout the law and harm the environment,” Justices Madan Lokur and Deepak Gupta had observed about the OM in their judgement.

Nonetheless, documents obtained by HuffPost India under the Right to Information Act suggest that Gadkari, a senior union minister in Prime Minister Narendra Modi’s cabinet, wrote to Dr. Harshvardhan, the environment minister, to help the real estate firm avoid the Rs 105 crore penalty for flouting the law and polluting the environment. Advertisement

Gadkari said the Supreme Court judgement could “shatter the dreams of the home of the common man” by affecting thousands of construction projects across the country. Atul Jaiprakash Goel, the builder, Gadkari said in his letter, was requesting a meeting with Dr. Harshvardhan to explain “the problems created” by the Apex court’s judgement.

Gadkari’s claims appear to be based on a two-page letter written by Atul Jaiprakash Goel, Managing Director of the Goel Ganga Group, that he sent to Dr. Harshvardhan along with his letter.

To be sure, Gadkari is only the latest Maharashtra politician to lobby on Goel Ganga’s behalf. HuffPost India has previously reported how former Maharashtra Chief Minister Devendra Fadnavis and Rajya Sabha MP Sharad Pawar also tried to help the controversial real estate firm, substantiating fears of a cross-party consensus in Maharashtra to support business interests at the expense of the environment. Advertisement

HuffPost India has written to Gadkari, Dr. Harshvardhan and Goel Ganga Group MD Atul Jaiprakash Goel for their responses and this report will be updated if they respond.

What Goel Ganga requested in letter to Gadkari

Goel Ganga Developers (India) Pvt Ltd’s construction project faced a legal challenge because the real estate company built 18 residential and commercial buildings in the Vadgaon Budruk village on Sinhgad Road in Pune even though it only had environmental clearance to construct 12 buildings.

The company justified this in court saying that it followed, as per standard practice, the definition of Built Up Area that was given in the Development Control Rules 1982 of the Pune Municipal Corporation. So, even though it had increased the number of buildings constructed, the total built up area it had constructed on was within permissible limits.

A flat-owner in the project, Tanaji Gambhire, took Goel Ganga to court. He sued the company first in the Western Bench of the National Green Tribunal, which ruled in his favour, and then appealed to the Supreme Court to enhance the amount of damages imposed on the company. Separately, the company also appealed against the Tribunal’s verdict.

The Supreme Court disagreed with Goel Ganga, holding that the definition of Built Up Area as laid out in the Environment Impact Assessment notification 2006 was clear enough and appropriate in this case.

In a previous report, HuffPost India has explained the intricacies of this case in some detail. In a nutshell, the Goel Ganga referred to an Office Memorandum issued by the Ministry of Environment on 7 July 2017 to resolve any ostensible confusion between the differing interpretations of Built Up Area.

While Goel Ganga claimed this memorandum showed it was right to go by the built up area definition as mentioned in the Development Control Rules of the Pune Municipal Corporation, 1982, the Supreme Court — as mentioned earlier in this story —disagreed and quashed the memorandum.Advertisement

A significant part of Goel’s 16 August 2018 letter to Gadkari was devoted to explaining why this memorandum was important and needed to be revived.

The decision to strike down this memorandum, Goel wrote, had come as a “rude shock” to the entire real estate sector. The memorandum, Goel continued, ought to be “revived and gazetted to help a critical industry without any further delay” as an estimated 11,000 projects across the country were at stake.Advertisement

What Goel did not mention in his letter was that this memorandum was issued by the environment ministry only after lobbying by the Confederation of Real Estate Developers Association of India (CREDAI). At the time, the Honorary Joint Secretary of CREDAI’s Pune Chapter was Goel himself.

What Goel did not mention in his letter was that this memorandum was issued by the environment ministry only after lobbying by the Confederation of Real Estate Developers Association of India (CREDAI). At the time, the Honorary Joint Secretary of CREDAI’s Pune Chapter was Goel himself.

It is unclear why a minister of Gadkari’s stature took Goel’s claims at face value. After all, the highest court in the land had been unsparing in its assessment of Goel Ganga.AdvertisementAd

“This Court has in a number of cases awarded 5% of the project cost as damages. This is the general law,” Justices Lokur and Gupta wrote in their August 2018 order. “However, in the present case, we feel that damages should be higher keeping in view the totally intransigent and unapologetic behaviour of the project proponent. He has manoeuvred and manipulated officials and authorities.”

Further, Goel appears to have exaggerated the number of projects which could be affected by the verdict. The Builders Association of India, in a separate petition filed in the SC, estimated that approximately 5,000 projects across India (less than half the 11,000  number quoted by Goel) were affected by the Supreme Court’s decision. Advertisement

As for Maharashtra, where Goel claimed 1000 projects in big cities like Mumbai, Pune and Nagpur were affected; in a closed door meeting in June 2019, the state government told environment minister Prakash Javadekar the actual number of affected projects was closer to 145.

Yet Gadkari’s letter to Dr. Harshvardhan did not mention any of this background and legal problems associated with the project in general and the company’s specific request for the revival of the OM in particular. Instead, Gadkari’s letter focused on the so-called  “problem” caused by the SC judgement.

After highlighting the concerns of the realty sector, the Nagpur MP and former Bharatiya Janata Party president concluded his short letter with a caveat, “In view of the above, I would like to forward the matter at your end for needful action as per guidelines and after verification.”Advertisement

What happened after Gadkari’s letter?

It could not be confirmed if the then environment minister Dr. Harshvardhan met Goel Ganga MD Atul Jaiprakash Goel. The illegal memorandum in question was never revived. On 5 March 2019,  the environment ministry issued another office memorandum asking state governments to act against violators.

The Builders’ Association of India (BAI) filed a Special Leave Petition in the Supreme Court in April 2019 seeking stay on the August 2018 judgement and an interim protection from any adverse action against real estate companies. In an interim order, a three-judge bench of the SC ordered that “no coercive action” be taken against the violators and agreed to hear the overall challenge. Inexplicably, the union environment ministry has not challenged this interim order though it is the main respondent in the case nor has it filed its reply.  Advertisement

To Goel Ganga’s appeal against the August 2018 judgement, a two-judge bench of the SC in September 2019 refused to reconsider the previous order.

So, as on date, while the Pune-based real estate company continues to be guilty of having violated environmental laws, the real estate lobby groups are trying to overturn the verdict lest the thousands of other violators also get exposed.