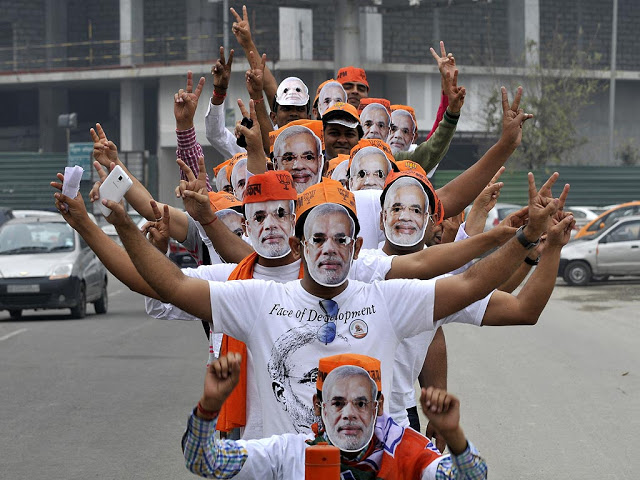 Neoliberalism as an ideology emerged in Central Europe during early 20th century in opposition to socialism as an alternative to imperial, colonial and capitalist plunder, war and economic crisis. The Department of Economics at the University of Chicago shaped neoliberalism as a strategy to shift the power from workers to the owners of capital by weakening the state and expanding the ideals of free market.

These strategies were converted into economic policies and projects to undermine the power of labour by marginalising it both in economic and social terms. Neoliberalism today has become a political and economic project of capitalist classes to pursue their economic interests with the help of ruling classes. Such a project encompasses all spheres of social, economic political, cultural and religious lives of people.

The neoliberal economic policies pursued by the Indian National Congress have helped to create the conditions for the growth and consolidation of Hindutva in Indian politics. Hindutva protagonists helped the capitalist classes to consolidate their base in India. The undisputed neoliberal economic paradigm is redrawing the nature of relationship between politics, society, state and individuals as citizens in India.

In such a context, the state has abandoned its own citizens and becoming a security state to protect the interests of the capitalist classes. The citizens are suffering under hunger, homelessness, unemployment, illiteracy, illness, and hopelessness.

The social and economic alienation produces political distrust and historic opportunities for the growth and consolidation of Hindutva politics in India. The abject condition of alienation produced by neoliberalism becomes life and blood of right-wing religious politics of Hindutva forces in India.
Hindutva politics plays two roles in India. The first role is played by the government led by Narendra Modi to pursue economic policies to uphold the interests of global, national and regional capitalist classes. This way, Hindutva politics is constitutive part of neoliberal project.

Neoliberalism and theocratic politics move together as twins. It serves each other’s purpose. The theocratic political culture of Hindutva is established by the RSS which produces prejudice and hate. Such a culture diverts people’s attention from real issues of their lives and livelihoods. The diversionary tactics of Modi government helps both the capitalist classes and fascist RSS to implement their agenda.

There are fundamental similarities between the rise of fascism in Europe and Hindutva politics in India. The growing street violence, lynching and killing of Muslims, Dalits, communists, prejudice against religious minorities, capturing state power by electoral means and infiltration of RSS into judiciary, universities, army, media, police and bureaucracy are some of the similarities between European fascism in early 20th century and Hindutva politics in India today.

There is much resonant here. European fascism took a decade to evolve during 1930s but Hindutva is institutionalised and internalised nearly for a century in India since 1920s. Hindutva is not only populist but also popular beyond the cow belt of Hindi heartland. It has expanded its support base from landed elites and business communities to rural areas of India.
The neoliberal economic policies marked the difference between European fascism and Hindutva in India. The all-out onslaught on labour laws and labour movements are common features between neoliberalism and the Modi-led Hindutva government in India.

Neoliberalism and Hindutva politics is grounded on the twin idea of spreading fear and insecurities, which helps in the re-emergence of different reactionary religious and regional fault lines in the society. This helps Hindutva to consolidate their power by using security infrastructure in the name of unity and integrity of India and Indian nationalism.

Hindutva protagonists are also committed to neoliberalism ideology as an economic policy strategy. Neoliberal and Hindutva forces are suspicious of democracy. Both consider the ideals of debate, disagreements and dissents as existential threats.

Therefore, there is diminishing support for democratic culture, individual dignity, human rights and individual liberty. Such developments are integral part of neoliberal political and economic culture concomitant with the interests of the Hindutva forces in India.