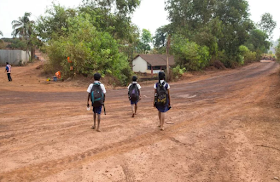 By Ashok Shrimali*
There is no end to misery of 45 tribals of a small Goa village, Sonshi, who were arrested in April this year for protesting against air and noise pollution which villagers say is caused by thousands of trucks running via the small road in the village.

Kept in judicial lockup for nine days in April, pressure began building when they refused to sign the bail bond and their school going children protested before the Police Station.

However, cases against the tribals have not yet been withdrawn, even though the High Court of Bombay at Goa and the Goa Child Rights Commission took up suo motu cognizance of the incident.

The matter is still pending, even as the authorities have admitted in their report to the court that there was serious violation of law and that pollution was at a much higher level than the permissible limit.
A police report to the Goa administration, a copy of which is with Counterview, admits that daily 800 to 900 trucks ply through this route covering about 4,000 trips, transporting iron ore of six mining companies.
It says, “About 60 to 70 families residing at the starting point of these mines at Sonshi village next of the road are facing immense dust and sound pollution because of iron ore transportation”, adding, one of the mining companies has proposed to “increase 117 more trucks to ply through the same route.”
Seeking change of route for the truckers, the report says, there also exists a school in this area, with transportation carried out next to the school. Pointing out that here “about 20 to 25 trucks ply in a minute through this road, leading to dust pollution”, it warns of “fatalities due to vehicular accident.” 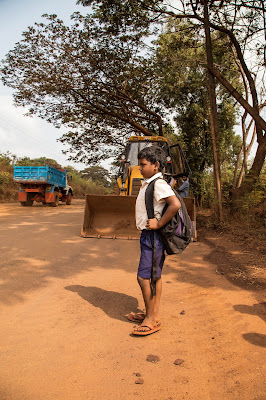 Ravindra Vellip of mines, minerals & People (mm&P), a civil rights organization, who has taken up the tribals’ cause, says, the mining was being carried out in violation of the Supreme Court Judgment in Writ Petition 435 of 2012, in which it directed the Goa State Pollution Control Board (GSPCB) to “strictly monitor the air and water pollution in the mining areas.”
Following an Aam Aadmi Party (AAP) gherao on April 26, the GSPCB, he says,  “woke up from its long sleep, issuing “show cause notice to the mining companies at Sonshi.” Yet, shockingly, he adds, “The GSPCB itself allowed mining companies to violate its own norms and conditions for more than five months.”
Vellip says, “The questions arises, why did Sonshi villagers arrested? Why charges were filed against them and why they were kept in judicial lockup for about 9 days?”, underlining, “It was GSPCB who failed to act. It was the GSPCB who violated the basic fundamental right of Sonshi villagers, their right to life, to fresh air and water, right to live.”
A mm&P  statement, quoting villagers, estimates that about 1,200 trucks ply daily converting about 10,000 to 12,000 daily trips through the village road, which means, “considering the average quantity of 10 tonne per truck, the total quantity of ore transported daily from six mining leases is approximately 0.1 MT per day.”
Meanwhile, in a letter to the Goa governor, with copies forwarded to the chief minister, the state police chief and senior officials of the state environment department, including the GSPCB, the local villagers have complained have sought immediate stopping of “illegal mining”.
—
*Secretary-general, mines, minerals & People