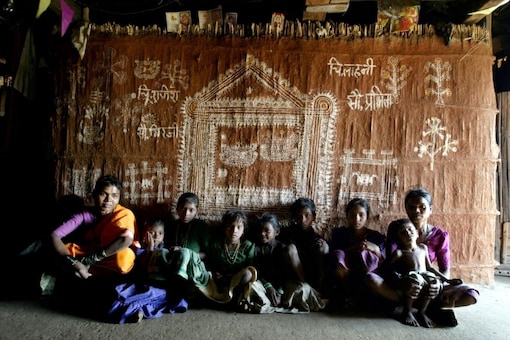 In and around tribal areas, the health facilities and covid awareness are just not poor but almost missing. How State failure and paucity of medical facilities have impacted the Adivasis in the wake of coronavirus pandemic.

28-year-old pregnant woman Tara Sorthey from the Gor tribal community had to travel around 10 km for a Covid-19 test in Chattisgarh’s Korba district. A resident of Pinjra village, Tara got her reports of the rapid antigen in four minutes. But as she returned to her village, she sensed she was shunned by others. She moved to her maternal village to quarantine herself, with the only question, “Did I actually have covid-19? I was just having pain around my waist and that could be for pregnancy.” The story of Tara, an activist and writer at Adivasi Lives Matter, sheds light on the severity of the Covid-19 pandemic’s impact on the tribal population of India.

Lack of Covid-19 awareness and a paucity of medical facilities have come to plague the lives of hundreds of Indians, as the country battles the harrowing second wave with warnings of a third one. Even as citizens from urban areas face shortage and difficulties in availing suitable health care, Adivasis in rural India lie ever further away from the radar of developed infrastructure.

In September 2020, the Union Tribal Minister Affairs Minister Arjun Munda said less than 3 per cent population in 177 tribal-dominated districts in the county has been detected as positive for coronavirus, reporting “no major outbreak of the disease in tribal areas”. However, what happens when the situation does get out of hand?

“In and around tribal areas, the health condition and awareness is just not poor but almost missing, and that has always been the general trend in India. People here have died from other diseases long before covid. Yet, nothing has ever shaken our government. So, why would they do anything now?,” says Ramesh Sharma, General Secretary of Ekta Parishad, advocacy of land and forest rights.

On the other hand, primary healthcare centres and hospitals at district and subdistrict levels lack a sufficient number of doctors and workers and that has “created a critical impact on the lives of tribal people” at a time when India has reported over four lakh daily coronavirus cases, opines the senior activist.

In Maharashtra’s Aarey colony, which has been inhabited by several indigenous tribal communities, the situation stands to be no different. Elaborating on the healthcare structure prevailing in Aarey Municipality, 59-year-old Cassandra Nazareth from Mumbai-base Nazareth Foundation, which has been working extensively to support the livelihood of tribals, says, “Aarey has got a hospital which is almost non-functional, they don’t even have proper toilets for the staff. The ‘so-called’ hospital is more like a dispensary without a single X-ray machine. I have myself tried to bring in some for of developments there, but have not been successful yet.”

Lack of accessibility in remote areas has long isolated the Adivasis from reaching out to the required health checkups.

For the various communities including Jamatia, Kaloi, Kaipeng, Chakma, Lusai, Marat and so on, spread across the districts of Tripura, a critical situation may take them up to three hours to reach a hospital in the capital, Agartala. “It might take people up to five hours from the last territory in Tripura to travel to the city for a hospital,” says Bhibhuti Debbarma, Founder President, Youth for Integration Trust, Agartala.https://2a39e389426a3bcd06400ccc6f6a2966.safeframe.googlesyndication.com/safeframe/1-0-38/html/container.html

Although primary health care centres and hospitals have been set up in district and sub-district levels,  “there are not enough healthcare staff to take care of the covid situation there,” says Debbarma.“Although sub-centres have medical facilities and staffs, but not sufficient. For non-critical cases, the sub-centre are the places for people to avail, but needless to say lack of transport to these far places makes the situation often difficult,” he adds.

The failure of the State has often been linked to how much India spends in the healthcare sector, which is greatly dwarfed when in comparison to other countries. The country’s health expenditure has varied from 1.2 per cent to 1.6 per cent of the GDP in recent years and the National Health Policy of India, which came out in 2017, envisaged that the country spends at least 2.5 per cent of its GDP on the health sector by 2025. “A 10 per cent hike, that too during the novel coronavirus disease (COVID-19) pandemic, will not take us anywhere close to that goal,” said a health economist with the Public Health Foundation in a recent report.https://2a39e389426a3bcd06400ccc6f6a2966.safeframe.googlesyndication.com/safeframe/1-0-38/html/container.html

A lack of trust in the government built over the years is another instigating factor for Adivasis to keep away from the government healthcare system. “There’s no reason for them to trust the govt, because of the betrayal they have felt over the years. There is a serious number of covid cases but they prefer to die in their lands than seek treatment,” says Ramesh Sharma.

However, the question remains how are these tribal communities fighting the sickness in wake of coronavirus? According to these experts, it’s their food habits that give them more immunity than citizens of urban India.

“Needless to say, people from rural India including Adivasis have a far better immunity system than us. They are eating better food than us, their methods of preparation are also different that retains the nutritions because of slow cooking. This might be one big reason that is still holding the communities in greater stead than ours’,” says Cassandra.

Taking into account the situation in Tripura, Debbarma reiterates a similar statement, “They indeed have stronger immunity because of their food habit, so they tend to heal faster. As a matter of fact, communities residing in remote interiors also resort to herbal medicines at times. There are also ayurvedic doctors here and there.”

Ramesh Sharma feels, that for ages the traditional medicines of these communities have gone unnoticed and unrecognised. “There’s a notion of allopathy and homoeopathy curing all, and it only holds meaning in areas that have a developed/developing healthcare system. So probably one wiser way to approach recovery here is to rely on and realise their traditional medicine and immunity-boosting elements.”

Debbarma says that they often hear cases of people catching fever in villages, but hours of travelling to hospitals and “lack of awareness” prevent them from getting tested. Although there are ASHA workers to take care of mild symptoms, Ayurvedic medicines are what they resort to.

“There is no separate plan for the creation of awareness. There’s no availability of PPE kits as such. Panchayat and local authorities are trying their best with supplies, there’s a huge demand but the delivery is very poor. The situation also varies depending on what tribal areas are under the radar of the govt,” Ramesh Sharma describes the situation.

However, at this cross-road, NGOs and social enterprises across the nation are stepping in to set up facilities, create the necessary awareness and help treat patients and people in both rural and urban areas. From delivering kits and ration to remote rural areas, to support lost livelihood in such trying times, these organisations are constantly maintaining lines of communication between patients, their dependents and healthcare personnel.

Cassandra, however, points out that NGOs are equally facing a tough time to run their operations following the amendments made under the FCRA (Foreign Contribution (Regulation) Act) in September 2020, which has financially throttled the first-line responders. The new rules govern the use of foreign donations received by non-governmental organisations in the country and with the onset of the pandemic, several cash-strapped NGOs have been requesting the Centre to temporarily suspend foreign funding rules.

“There are so many steps involved. We are the first-line responders but we are not being allowed tools to properly respond. Where do we get the funds now? How do we help them?” asks Cassandra while explaining the hefty amounts spent for sending ration kits to 350 families from a remote Aarey community.

In an earlier report by The Indian Express, Voluntary Action Network India (VANI), the apex body of Indian voluntary development organisations said, “The FCRA bill, 2020 will be a death blow to development relief, scientific research and community support work of the NGO community, as it prohibits collaboration with other Indian organisations,”.