“No onions please, we’re brahmins”: a serving of caste for breakfast #KitchenPolitics 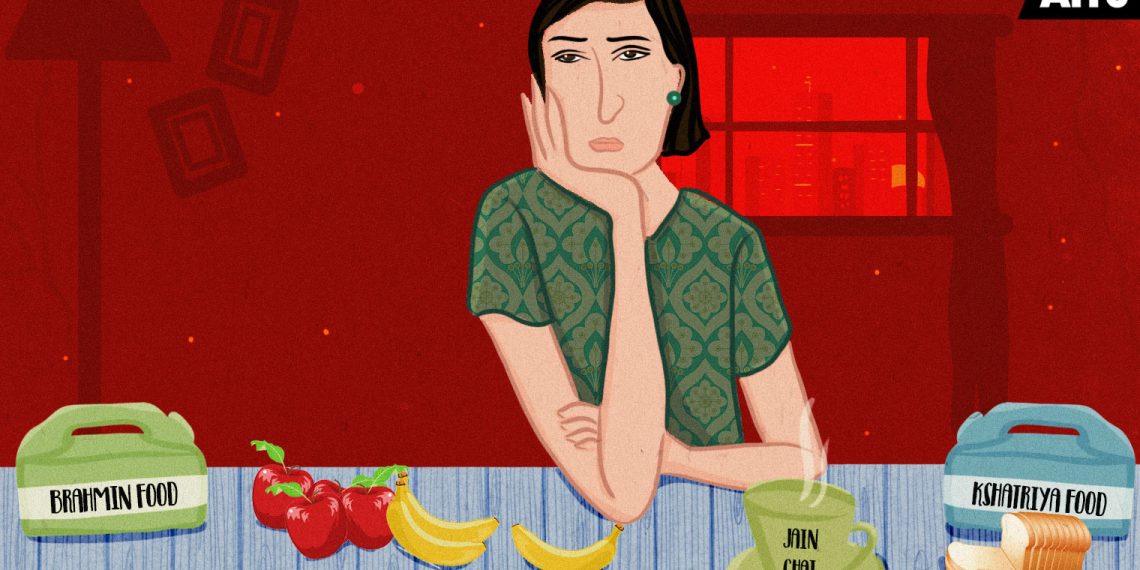 Despite being from a cosmopolitan family, I realised that every day, I was unwittingly consuming our caste on my plate. In the game of kitchen politics, caste is a far more deeply riven divide, than the differences between North and South Indian food.

In the 23 years of my existence, I grew up, like most of us, happily consuming whatever delicious food my mom cooked at home. My Tam Brahm parents grew up in the urban landscape of Delhi and Mumbai, so our traditional cuisine made way for the garlic-laden chutney of a vada pao and the tangy spice of pani puri, even as we consumed copious amounts of curd rice at home.

They passed on this happily chaotic, complex culinary system to me by cooking every vegetable under the sun. But my grandparents, with whom I’ve been staying for the last two weeks, resisted such expansion of our familial tastes. They resolutely stuck to scary-sounding vegetables like snake gourd and ash gourd without any signs of my staples: mushroom, cauliflower, onion, and garlic.

Even though I consider my grandparents progressive, cosmopolitan people, they’d never eaten any of the alien vegetables that I consume without a thought. For their diets are governed by a complex gastronomic system affected by many factors – to them, incorporating these new-fangled veggies into their cuisine was unfathomable. And the biggest and most flagrant factor is the big C-word: Caste.

For centuries, the humble mushroom, radish, the nationally despised tinda, onion, and garlic, had been considered “unfit” for Brahmins. As time evolved, my family’s belief in the caste system faded like it deserved to – but cuisine remained impervious to these changes. Their palates refused to adapt.

“Brahmin food” in India is traditionally guided by the philosophy of sattvic food – this has frequently translated into largely vegetarian food (although the jury is still out on this one, considering some groups continue to consume non-vegetarian fare). Other castes were supposed to have consumed rajasik or tamasik food. The characteristics associated with rajasik food are passion and change, while darkness and inertia are associated with tamasik fare – obviously undesirable characteristics that corrupt a Brahmin’s “purity.” This Brahmin-dominant culinary narrative has also been successful in projecting India as a vegetarian nation, even though the vast majority is non-vegetarian.

When I was younger, my mother would complain about being unable to find a recipe “we” follow on the internet. I realize now that this “we” was an indirect reference to our caste. An odd-tasting sambhar at someone else’s house is dissected threadbare until proven that this is not “our” sambhar.

In this game of kitchen politics, caste is a far more deeply riven divide, than the differences between, say, North and South Indian food.

In the book Why Onions Cry: Peek into an Iyengar Kitchen, authors Vijee Krishnan and Nandini Sivakumar attempt to revive community cookbooks that were used by Iyer Brahmins, Parsis, and Jains to teach newlywed brides the way into their new family’s heart through their stomachs. I can’t speak for other households, but food in my house is serious business. Each meal is treated like a sensory experience and high expectations are placed on the person in the kitchen. While these ancient community cookbooks might appear like a nostalgic and heartwarming collection of home recipes, they also achieve the aim of preserving the cuisines of different castes.

As I continued eating my Brahmin-approved koothu at my grandparents’ house, I realized that every day, I was consuming our caste on my plate.

Of course, this projection of caste in our food would have been “harmless” if it had remained confined to our dinner tables – except it doesn’t. It also extends beyond the boundaries of our homes. We try and figure out the castes of people in a variety of surreptitious ways: By asking for their surnames, by figuring it out through their clothes or accents.

One way to break down these boundaries is through street food – which has the ability to blur caste boundaries and adapt to changing tastes. Street-food vendors come from a variety of castes, many of which wouldn’t be allowed inside Brahmin kitchens. Yet, outside of the household, these lines are blurred. A quick stroll in the mornings and evenings in any city and one can see the variety of people, including Brahmins compromising their “purity,” waiting in line for a plate of pani puri, poha, misal, or momos.

As far as I am concerned, my parents are garlic loyalists, enjoy mushrooms, and savor the flavors that were absent in their childhood, even though the cuisine of our community remains bound in chains labeled “heritage” and “authenticity”.

There is hope in the humble onion that has integrated itself well into our sambhar and is now a household staple. I will wait with patience for the time a scrumptious mushroom uperi will be on the menu at the next sadhya.

The article was originally published on Arre.