No, the SC hasn’t said that Aadhaar can be made mandatory for non-welfare schemes

Prasanna S, a lawyer with one of the parties, who was present in court during the hearings told MediaNama that “the status today is exactly how it was yesterday” and “the Court passed no orders today. This thing about benefit schemes and non benefit schemes, and whether it can be made mandatory for non benefit schemes etc was a conversation that the bench entered into with our senior counsel. Our senior counsel Shyam Divan read out the past order and clarified that, and then they moved back to the actual issue, about our application.”

The mentioning before the court today, according to Prasanna and the group Rethink Aadhaar, was about “the setting up of a constitution bench for final hearing of the main petitions; and (2) ensuring listing for the interlocutory applications to stay the provisions and the fresh notification issued under the Aadhaar Act.”

Both these requests for listing were declined by Supreme Court. Below are additional comments from Prasanna S, and the statement from Rethink Aadhaar on the proceedings held today. 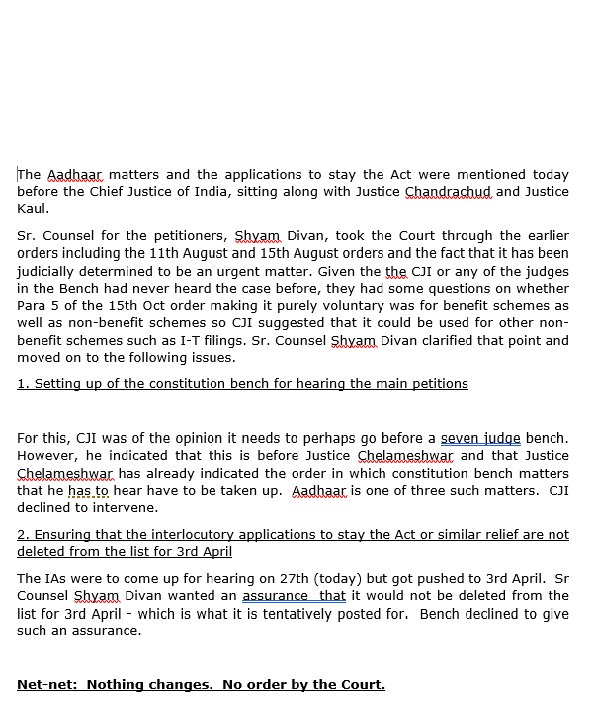 The Aadhaar batch matters (Writ Petition Nos. (Civil) Nos.494/2012 et al) were mentioned in the Hon’ble Supreme Court of India, in Court No. 1 presided by the Hon’ble Chief Justice of India, sitting alongwith J. Chandrachud and J. Kaul. The mentioning sought, (1) setting up of a constitution bench for final hearing of the main petitions; and (2) ensuring listing for the interlocutory applications to stay the provisions and the fresh notification issued under the Aadhaar Act. These requests for listing were declined by the Hon’ble Court. Given the considerable public interest in this case the requests made and the reasons provided by the Hon’ble Court during the course of the hearing are provided below. It is clarified by us that there is no formal, written order which was issued by the Hon’ble Court and the contents below were oral observations during the course of the hearing.

The Aadhaar batch matters were mentioned by Mr. Shyam Divan, Senior Counsel, who first drew reference to the earlier Orders of the Supreme Court indicating urgency in the disposal and hearing of the case. These included, Orders dated 11th August, 2015 and 15th August, 2015 passed by the Hon’ble Supreme Court of India. At this point, the Hon’ble Court inquired as to the interpretation of these Orders and the nature of restraint. It was submitted by the Ld. Senior Counsel that these restraints were being violated however the merits may need to be examined by the Court, which requires listing and hearing of the case.

The Hon’ble Court also refused a directed listing of the interlocutory applications for stay of the Aadhaar Act or similar reliefs. Such prayer was sought as the applications were listed as per the advance list of the Court for 27th March, 2017 but were deleted. These applications are now showing in the advance list of the Court for April 3, 2017. To ensure they are not deleted again a request was sought for a directed listing. Even though the reasons for deletion are not available to the Petitioners, it may be mentioned that due to the high number of cases listed each day in the Hon’ble Court many matters that are shown in the advance list are deleted and lawyers also make requests based on urgency to have a directed listing fixed on a specific date.

It is emphasised that no written order was passed given no specific direction was given for the listing of the main petition or the interim applications.