They are awarded the Prize for their efforts to end the use of sexual violence as a weapon of war and armed conflict.

The Nobel Peace Prize for 2018 has been awarded to Congolese gynaecologist Dr. Denis Mukwege and Yazidi human rights activist Nadia Murad for their efforts to end the use of sexual violence as a weapon of war and armed conflict.

“Denis Mukwege is the helper who has devoted his life to defending victims of wartime sexual violence. Fellow laureate Nadia Murad is the witness who tells of the abuses perpetrated against herself and others,” the official handle of Nobel Prize tweeted on Friday.

Dr. Denis Mukwege has spent large parts of his adult life helping the victims of sexual violence in the Democratic Republic of Congo. Dr. Mukwege and his staff have treated thousands of patients who have fallen victim to such assaults. Ms Murad is one of an estimated 3,000 Yazidi girls and women who were victims of rape and other abuses by the Islamic State. “She has shown uncommon courage in recounting her own sufferings and speaking up on behalf of other victims,” the Norwegian Nobel Committee said.

The panel had received nominations for 216 individuals and 115 organisations. But only a few dozen of them are known, since the committee keeps the list of nominations secret for 50 years, although some candidates are revealed by their nominators.

The winner last year was the International Campaign to Abolish Nuclear Weapons.

The 2018 prize is worth 9 million Swedish kronor ($1.01 million). Past winners who came under criticism include former U.S. President Barack Obama, who won in 2009 after less than a year in office, and Myanmar leader Aung San Suu Kyi.

Mukwege is an outspoken critic of the abuse of women during war who has described rape as “a weapon of mass destruction.” His work has also been a of an acclaimed 2015 film titled: “The Man Who Mends Women.” FILE- In this Thursday, Nov. 1, 2012 file photo, Denis Mukwege, Director of Panzi Hospital in the Democratic Republic of the Congo, gestures during a news conference in Stockholm.  (Henrik Montgomery/TT News Agency via AP, file)The Norwegian Nobel Committee Friday awarded the Nobel peace prize 2018 to a Congolese doctor Denis Mukwege, for his contribution to “end the use of sexual violence as a weapon of war and armed conflict.” Known as “Doctor Miracle”, Mukwege was born on March 1, 1955, in Bukavu. He was inspired to become a doctor by his father, a pastor who used to visit the sick. After studying medicine in neighbouring Burundi, he returned to work in Lemera hospital before pursuing specialist training in gynaecology in Angers, France.

In 2008, Mukwega became the Director of Panzi Hospital in the Democratic Republic of Congo. He and his staff have treated thousands of patients who have fallen victim to sexual assaults. He is an outspoken critic of the abuse of women during war who has described rape as “a weapon of mass destruction.” His work has also been of an acclaimed 2015 film titled: “The Man Who Mends Women.” Mukwege is the foremost, most unifying symbol, both nationally and internationally, of the struggle to end sexual violence in war and armed conflicts. His basic principle is that “justice is everyone’s business”, AP reported.

He has repeatedly condemned impunity for mass rape and criticised the Congolese government and other countries for not doing enough to stop the use of sexual violence against women as a strategy and weapon of war.

The Congolese gynecological surgeon has previously called gender inequality a disgrace to society. Speaking at an international assembly of the Lutheran church in Namibia, he said churches must speak out against sexual abuse, and he condemned what he called the “inhumanity” that some men show toward women.

He has been honoured previously by the United Nations and has received many other international awards, including the Olof Palme Prize in January 2009 and the Sakharov Prize in 2014. In September 2016, he also won the Seoul Peace Prize. He was appointed a professor at the Universite Libre de Bruxelles in Belgium in 2015.

Who Is Nadia Murad And Why Did She Win The Nobel Peace Prize?

The 2018 Nobel Peace Prize has been awarded to Nadia Murad along with Denis Mukwege, who are both campaigners against rape in warfare.

Nadia Murad, is an Iraqi Yazidi who was trafficked as a sex slave by Islamic State militants, and later became the face of a campaign to free the Yazidi people. She is also the first Iraqi to win the prize.

When she was growing up, Nadia dreamt of being a teacher or a beauty therapist, however, just before she reached adulthood Isis invaded her small Iraqi village and destroyed everything she had ever known. 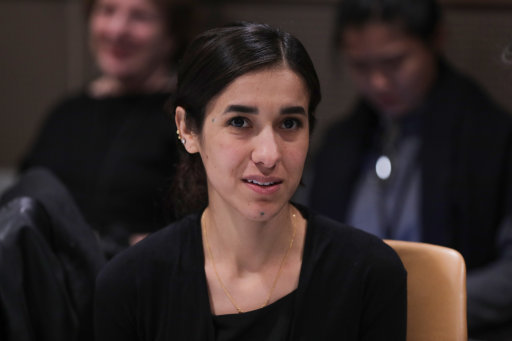 The UN Goodwill Ambassador was captured in August 2014 and sold into sexual slavery because her family belonged to the minority Yazidi religion.

Nadia was repeatedly raped and sold on to different groups before she managed to make her escape. One of her captors had left a door unlocked and so she risked her life and managed to leave.

Although she had escaped, Nadia was still overcome with the mental and physical effects of her ordeal but she bravely decided to speak publicly about what she had been through. 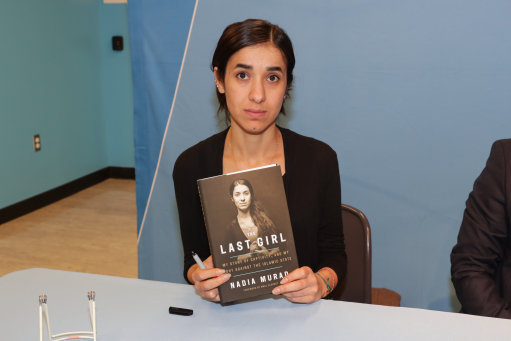 Nadia had to revisit her torture repeatedly but she bravely released her autobiography The Last Girl in 2017.

The book took its title from Nadia’s goal to be the last girl in the world to have a story like hers.

She campaigned to help put an end to human trafficking and called on the world to take a tougher line on rape as a weapon of war.

Her campaign has focused on support for survivors, and a long-term search for justice, calling on the world to collect and preserve evidence that would allow Isis militants to be brought to trial.

Nadia has a huge support system around her including lawyer Amal Clooney and Samantha Power, US ambassador to the UN under Barack Obama.

She was awarded the Vaclav Havel Human Rights Prize by the Council of Europe in 2016 and called for an international court to judge crimes committed by IS in her acceptance speech in Strasbourg.

Speaking about the joint award, the committee said: “They have both put their own personal security at risk by courageously combating war crimes and securing justice for victims.”

It also added that Nadia Murad and Denis Mukwege “helped to give greater visibility to war-time sexual violence”.