‘Nobody Bothers About Us’: Survivors Of #BhopalGasTragedy Speak Of Extreme Apathy 33 Years After The Catastrophe 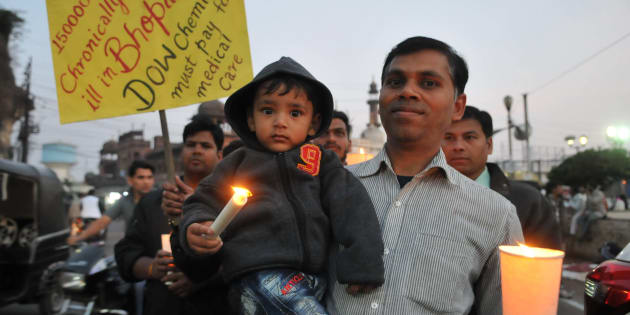 HINDUSTAN TIMES VIA GETTY IMAGES
Bhopal gas tragedy survivors and others paying tribute to the victims of the world`s biggest Industrial disaster on the 33rd anniversary of Bhopal gas tragedy, at Iqbal Maidan, on December 2, 2017 in Bhopal.

Usha Dubey was barely nine when one of the world’s worst industrial disasters struck Bhopal.

She lost her elder brother in the leakage of the deadly methyl isocyanate (MIC) gas from the Union Carbide factory in the city. The gas killed thousands in the night of 2-3 December, 1984. Lakhs of people were left with devastating disabilities.

“I was also considered dead and was thrown among a pile of bodies, but a nurse found me alive and saved me,” recalls Dubey.

“My memory of the gas disaster is that I was standing and crying, ‘mere bhai ko le aao’ (bring back my brother). As my parents had already died I had no one in the world and I was kept in a camp that housed children like me who were found abandoned after the disaster,” says Dubey, who still suffers from after-effects of the gas.

“I have severe breathing issues and can’t talk for long. Now that I am speaking to you, I won’t be able to talk for hours. I always feel exhausted and can’t see clearly. I got married but my husband left me because he felt I was mostly ill and not of much use,” she says.

“The governments never cared about us. In hospitals for gas-affected, it is extremely difficult to get medicines. There are long queues and if at all one gets the medicines, they are not good,” she says.

Even 33 years after the gas tragedy, the survivors find it hard to get proper medical care and face administrative apathy. The worst is the case of the woman survivors, particularly, those who were widowed in the tragedy.

There are around 20,000 such women, but the meagre pension of Rs 1,000 that was started in 2010, was stopped a couple of years ago. These women don’t get a pension and despite several agitations, no action has been taken in this regard.

Activist Balkrishna Namdev says that it is unfortunate that the women who lost their husbands and who suffer from severe ailments have been deprived of the meagre amount.

In fact, there have been protests, and demands have been raised from different quarters that the government should start the pension so that the survivors could sustain themselves, but this has fallen on deaf ears.

Hospitals were set up for gas victims and were aimed at providing them free treatment but now most of them are now lacking in facilities. Even the super-specialty Bhopal Memorial Hospital and Research Centre (BMHRC) is facing shortage of doctors and many of its departments are not functioning.

‘Nobody Bothers About Us’

Take the case of Aqueel Ahmad, who has been on dialysis for almost 12 years. He says that every month he needs medicines worth Rs 3,000-4,000 from outside as hospitals that were set up for the gas victims don’t provide medical care.

Rani, another gas victim, says that the promises never materialized. “Neither governments provided medicines, not any efforts were made for employment generation,” she says. Aneesa Bi, 65, rues that for the governments, the plight of gas victims seems to be a non-issue. “Nobody bothers about us,” she says.

The figure of deaths due to gas tragedy and its after-effects crossed 20,000 long ago. Lakhs were suffering from pulmonary issues, ailments of skin, throat, eyes and kidney.

NGOs working for the gas victims say that the agreement between Indian government and the Union Carbide in 1989 was totally unjust and there was little focus on proper compensation, rehabilitation and medical care of the victims.

The affect of the gas passed on to next generation too. The huge toxic waste lying in the premises of the Union Carbide factory led to severe contamination of underground water in the areas near the factory. Every year after rains, it continues to contaminate the water even more.

Cancer prevalence is too high among gas victims and kidney ailments are too common.

But, all these issues remain unresolved. Activist Abdul Jabbar says that the compensation case is in Supreme Court. “The BJP is at the helm both in the state as well as centre. The government should take steps in this regard,” he says.

“The survivors, especially, the women who were widowed in the gas tragedy, should be given lifetime pension of at least Rs 2,000 per month”, adds Jabbar, the convener of the Bhopal Gas Peedit Mahila Udyog Sangathan (BGPMUS).

In a letter to PM Narendra Modi, BGPMUS’ ND Jayaprakash and Abdul Jabbar have drawn his attention towards the fact that the huge chemical waste still remains in factory premises and its removal wasn’t considered a priority despite the Swachh Bharat campaign.

“The complaints of abdominal pain are too high among gas victims exposed to contaminated ground water. The percentage of women suffering from the pain is twice that of men,” says Mrityunjay Mali, a medico associated with Sambhavna Trust Clinic that was set up to provide free medical care to victims.

Also, it has been observed that there is high concentration of chemicals and heavy metals which has affected kidney, liver, brain, reproductive system, say clinic officials.

The Prime Minister has been urged to take initiative to ensure proper treatment of gas victims. Also, he has been urged to request Supreme Court for disposal of the curative petition for due compensation which is pending in the Supreme court for seven years. The letter also draws his attention towards the slow pace of trials in criminal cases registered in the aftermath of gas tragedy.