‘Nod to GM crop trials is betrayal of people’s trust’ 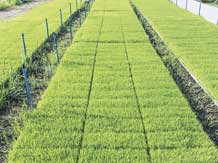 In India, the issue of GM crops has been a political hot potato. So far, only commercial growth of BT cotton has been allowed.

BKS general-secretary Prabhakar Kelkar said, “Our stand is very clear; we totally oppose the decision of the environment ministry. We will write to Environment Minister Prakash Javadekar on this. We want the government to withdraw the permission for field trials immediately.”

He added foreign multinational companies had been lobbying for this approval and the government might have come under their pressure. “GM crops are against the interests of farmers. If the government doesn’t withdraw its decision, all options are before us,” he said.

Former BJP leader and chief of the Rashtriya Swabhiman Andolan K N Govindacharya tweeted: “An anti national decision #Modi ministry to promote GM crops and damage soil and agriculture #India.” (sic)
In its election manifesto, the BJP had said it would allow GM foods only after proper evaluation.

“Giving a clearance to GM crop field trials is a betrayal of people’s trust. The people who had elected the BJP to power are feeling deceived. They had voted on the promises made in its manifesto and the speeches made during the election campaign,” said Ashwini Mahajan, national co-convenor of SJM.

Pande said representatives of DuPont had, on Friday, made a presentation on seed production technology before GEAC.