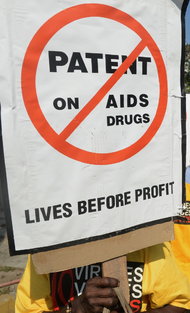 ection 3(d), one of the safeguards introduced by Parliament, seeks to prevent patenting of new forms of known substances unless they exhibit enhanced efficacy. Were it not for section 3(d), the standards for grant of product patents on medicines in India would be lower, almost identical to the standards in countries such as the United States andEuropean Union, where a large number of patents are granted on minor modifications of a single medicine.
Section 3(d), along with other safeguards such as allowing patent oppositions by public interest groups, has been used as one of the grounds to successfully challenge patents for minor modifications of several antiretroviral (ARV) medicines used to treat people living with HIV.Section 3(d) also became the basis for the refusal of a patent toNovartis for the beta-crystalline form of imatinib mesylate, a drug used to treat chronic myeloid leukemia (CML), a type of blood cancer. In 1998, Novartis filed a patent application in India for this medicine. In 2005, the Chennai Patent office heard patent oppositions to this application including one filed by the Cancer Patients Aid Association (CPAA). The CPAA challenge was spurred by great concern over the price Novartis set for its version of the drug (sold as Gleevec) at Rs 1,20,000 ($2,400) per month as against the generic versions that were available at a cost of around Rs 8,000 to Rs 12,000 per month.

In 2006, the Patent Office rejected Novartis’ patent application on several grounds, including section 3(d). Novartis immediately challenged the constitutional validity of Section 3(d) before the Madras High Court arguing that the term “efficacy” was vague. In 2007, dismissing the challenge, the Madras High Court held that the word “efficacy” had a definite meaning in the pharmaceutical field, i.e. therapeutic efficacy. In 2009, the Intellectual Property Appellate Board (IPAB) rejected Novartis appeal against the patent application rejection on the ground that it did not satisfy section 3(d). Novartis then approached the Supreme Court asking for a liberal interpretation of section 3(d) that would allow it to get a patent on imatinib mesylate.

Novartis tried to argue that the physico-chemical properties of the polymorph form of the imatinib molecule, i.e. better flow properties, better thermodynamic stability and lower hygroscopicity, resulted in improved efficacy. The Supreme Court firmly rejected this contention holding that in the case of medicines, efficacy means “therapeutic efficacy” and these properties while they may be beneficial to some patients do not meet this standard. The Supreme Court also held that patent applicants must prove the increase in therapeutic efficacy based on research data in vivo in animals.

Eight years after India’s patent law was amended, the Supreme Court decision has firmly established the legality and validity of Section 3(d) and has lain to rest the controversy raked up around the section by the pharmaceutical industry. The Commerce Minister has said that India’s law is fully in compliance with the TRIPS Agreement. However, on April 15, commerce minister Anand Sharma travels to Brussels to potentially sign the EU-India FTA that threatens to impose on India obligations far in excess of the TRIPS Agreement; obligations known to undermine generic production and access to medicines.

The Indian Parliament has balanced India’s obligations under TRIPS with the right to health through Section 3(d). The Supreme Court has unequivocally interpreted the true intention and spirit of this provision. It behooves the Indian government to respect the Parliament and the Supreme Court and ensure that it does not sign away these hard fought victories by health and public interest groups in trade negotiations.

The author is a senior advocate and director, Lawyers Collective

Aadhaar-linked payment system yet to take off
Bajrang Dal,Hindu Mahasabha extremists thrash couples in front of the police on Valentine's Day in B...
#India -Chhattisgarh lawyer, client charged with #sedition walk free #goodnews
More than 200 Citizens’ Solidarity with Voices of Democracy #DefendDissent