//
Mail Today, New Delhi
From Ramanujan‘s essay to Hussain’s paintings, Rushdie’s writings to Facebook musings, the issue of cultural censorship seems to be spreading like a disease in this country. But before it goes viral, activists have decided to step up efforts to retain India‘s democratic fabric. 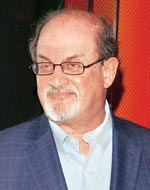 Salman Rushdie‘s ‘The Satanic Verses‘ is banned for alleged blasphemy against Islam.

In one such attempt that bears a resemblance to the “flashmob”, where a group of people shake their legs in a choreographed move, free speech advocates have now joined hands to raise their voice against increasing intolerance in the country.

Termed “flashread”, groups in cities across the country met in public places and read out from works by controversial authors on Valentine’s Day, which has itself become a flashpoint of cultural censorship.

“What we have to do is keep embarrassing the state so that we can ask them; do we want India to turn into some of those countries where authors are jailed?” Salil Tripathi, an author, asked. “The state needs to be reminded that it has to protect the vulnerable. And who is the vulnerable here – the painter who paints what he wants to… the author who has something to say!” A.K. Ramanujan‘s essay on Ramayan was banned by the Delhi University.

At Delhi’s Lodi Gardens, a group of about 15 people gathered and began reading out extracts from the works of A.K. Ramanujan , Rohinton Mistry, Jeet Thayil as well as Salman Rushdie , whose intended appearance at the Jaipur Literature Festival created quite a storm.

“What we’re doing is showing them that there’s a civil way to make ourselves heard,” Mohit, a financial services consultant who read at the gathering, said. “We can easily form a mob and try to go after the ones who want to silence us. But the point is we have to behave in way you can appreciate. We have got to show that there’s a better way than just being loud.”

The movement was organised by Nilanjana Roy, a literary critic, editor and writer who is also heading an effort to lift the ban on Rushdie’s The Satanic Verses.

Roy put the idea down on her blog on February 10 and it quickly spread on social networking sites, inspiring similar events in Mumbai, Bangalore and other cities – with groups using Twitter to keep each other informed about the timing and location.

The movement also allowed for impromptu changes – with one group in the Capital deciding to carry out a “flashread” at Janpath after office-goers were unable to make it to Lodi Gardens.

After the group at Lodi Gardens failed to attract much attention, they decided to move into Khan Market where a spontaneous reading in front of a bookshop invited interests and questions from passersby.

“More and more people seem to be afraid to say what they want; afraid to express themselves, and that is obviously a problem,” Mohit said. “If you can’t speak, you can’t think. For us the role model is right here (in India)… As a state and a country we are in danger of forgetting that.”