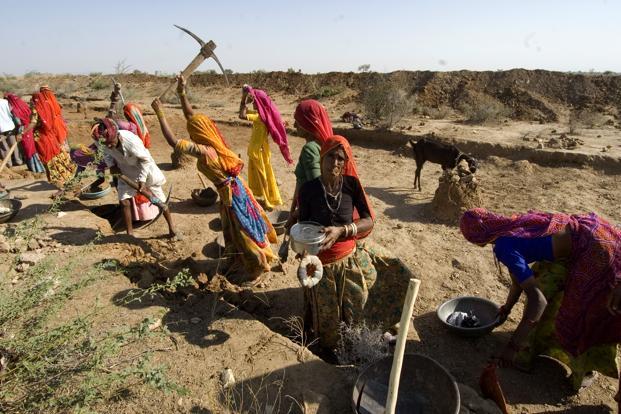 This cannot be called an “additional resource”, it asserted, pointing out, important reasons why the financial package effectively means “nothing” for NREGA workers as not only their wages do not match the minumum wages,  there is continues to be “a significant delay” in disbursing wage payments, too.Stating that the delay is to the tune 50 days on an average even according by the Central Government, in a statement, it says, for this delay “no compensation is calculated and paid to the workers”, which is “a blatant violation of the Act.”

Each state has different NREGA wage rates and they are revised every financial year to account for inflation. The increase in wages was announced three days prior on March 24 to the financial package by the Ministry of Rural Development (MoRD).

The FM claim of the average wage rate of Rs 182 for 2019-20 is the average wage per day per person. As Prof Jean Dreze explains, this is the total 2019-20 wage bill divided by total person days of employment – in other words, an average of wages actually received rather than the average of notified wages.
It is lower than the weighted-average of state-wise notified wages for 2019-20 which is Rs 200, possibly because workers often work on a piece-rate basis. No-one knows what NREGA employment levels are going to be in 2020-21, so the average increase in wages by Rs 20 (182 to 202) is arbitrary.
The FM further assumes that all households will complete 100 days of work and hence earn 20 x 100 = Rs 2,000 more. Only 6.4 percent of households have completed 100 days of work in this financial year.

There has been a 32% reduction in the number of such households which completed 100 days, as compared to last year. This is largely due to administrative negligence causing unavailability of work and extensive delays in payments. It is shameful that in the time of such a crisis the government has intentionally obfuscated the facts to show that they have provided relief.

The issue of stagnating wage rates is not new to NREGA. Although there has been a raise in NREGA notified wages this financial year, they continue to remain lower than the state agriculture minimum wages in almost all the states. NREGA wages should be in accordance with the recommendations of the 7th pay commission.

As on March 28, 2020 the total pending NREGA wages stands at Rs 6,000 crore while pending material payments have mounted to Rs. 9,700 crore. In a letter dated March 27, 2020, the secretary, MoRD had stated that only Rs 4,431 crore has been released to states for clearing the arrears towards wages and material payments. This means that a significant amount of the budget of the financial year (FY) 2020-21 will have to be spent on clearing the arrears of FY 2019-20.

FM’s advisory on social distancing norms for NREGA isn’t pragmatic as accessing and working in NREGA involves several processes with significant physical proximity. Many of the state governments have rightly decided to suspend NREGA work temporarily. At such a time it is imperative that the government pays the full notified minimum wage for each day of the lockdown.

There continues to be a significant delay in disbursing wage payments to workers (an average of 50 days) by the Central Government. For this delay no compensation is calculated and paid to the workers. This is a blatant violation of the Act.