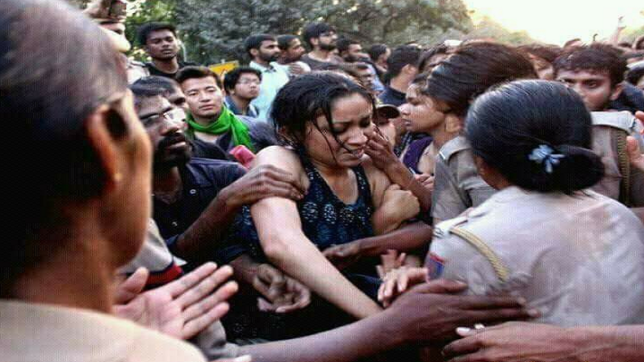 The Network of Women in Media, India (NWMI) strongly condemns the physical violence meted out to journalists covering a padyatra (long march) by students and teachers of the Jawaharlal Nehru University (JNU) in New Delhi on March 23.

The police stopped the protesters from proceeding to Parliament by using undue force, including water cannons and physical violence. In the ensuing scuffle, many students and teachers were hurt and their garments torn. Excessive force was also used on journalists who were covering the protest, and several were hurt, including at least two women journalists. Anushree Fadnavis, a photojournalist with Hindustan Times, tweeted, “Never thought I would be manhandled by lady Delhi police officers while doing my job. My camera was snatched and I haven’t yet received it”. The Station House Officer on duty, Vidyadhar Singh, roughed up and grabbed a woman reporter by her breasts. These incidents were video-recorded by several people present on the spot.

The journalist community in Delhi staged a ‘cameras-down’ protest at the Delhi Police headquarters on March 24,  unequivocally supporting the attacked journalists and demanding that those responsible for the assaults be brought to book.

The preposterous defence by DCP Madhur Verma, that the journalist who was attacked was “mistaken for a protester” is an appalling indictment of the attitude and behaviour of the police while dealing with peaceful protesters. Such strong-arm tactics do not bode well for our democracy.

The misuse of social media by the police in an apparent campaign to identify protesters is reprehensible.  Such irresponsible, malafide action by those charged with maintaining law and order could have serious repercussions. The police’s refusal to file FIRs on the basis of complaints made by the photojournalist and reporter is unacceptable. In contrast, their quick action in detaining some of the protesters and filing cases against protestors of rioting, destruction of public property and “obstructing public servants from discharging their duty” is an alarming indication of vindictiveness and reluctance to investigate the incidents in a fair manner.

·         Immediate registration of FIRs on the crimes committed against the journalists

·         Thorough investigation into the incident, including use of undue force on journalists, and prompt punishment of the perpetrators

·         Compensation to those affected by police violence

·         Immediate return of the camera, with data intact, and compensation for damage, if any.

NGT claims it has disposed of 90% of cases it has received, but lawyers dispute it, say cases often ...
#India - Work on Suktel irrigation project begins at gun point #oppression
India - Tribal development scheme reduced to tokenism
Why Are Palestinians Paying For Germany’s Sins?