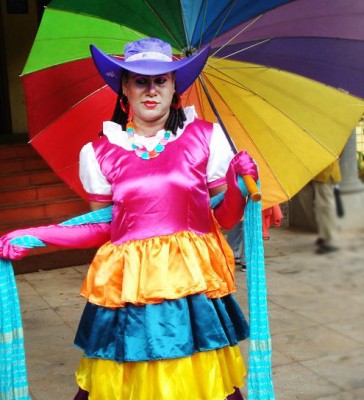 My friend and queer activist, Sweet Maria/Anil Sadanandan was brutally murdered on 10th May 2012, at his quarters in Kollam, Kerala. I cannot comprehend that such a crime was committed against a person who was so loving and lovable.

S/he was a vibrant, pleasant, courageous person, spreading a lot of positive energy around. A companion to many in all social classes. Bold enough to express and establish his/her marginalized and stigmatized identity in every space s/he traversed.

S/he was very active in the fight for the rights of sexual minorities. S/he worked hard to form community based organizations for sexual minorities in Kerala. S/he was the former General Secretary of Loveland Arts Society (LAS), Kollam, a community based organization for queer people. S/he was one of the advisory board members ofPEHCHAN project for Kerala, initiated by Sangama, Bangalore. The warm relationship and friendship s/he nurtured and maintained with community members was indeed the lifeline of these groups.

Anil’s intervention and focus to prevent and control the spread of HIV/AIDS among sexual minorities is commendable. S/he was very concerned about the health issues of those who have multi-partner sexual behavior. His/her unparalleled rapport with community members was very important in the effective implementation of HIV/AIDS prevention programmes, among this high risk group in Kerala.

Sweet Maria proudly revealed his/her identity in his/her family, workplace, every public space and media. To do this s/he had to encounter innumerable problems and had to fight consistently to establish his/her rightful social space. S/he incessantly fought against the injustice of mainstream society towards queer people.

Born on 5th May, 1973, in a lower middle class Malayalee family, Anil struggled hard to become a Govt. employee (Department of Harbor Engineering, Government of Kerala).

Sweet Maria / Anil Sadanandan lived his/her life fully, enjoyed the beauty of his queer nature, displayed it proudly and demonstrated its vibrance. In the queer pride march and in every queer cultural event, her pleasure in dance and the joy she was filled with, still reverberates in those who knew her. It’s still hard to absorb that we can’t rock in laughter at the queer jokes that s/he laid out at every turn, and that we will not be able to see and hear from her any more. S/he will not be there in any more festivals…and the void is unbearable.

S/he dared to face the challenges posed by an intolerant society which normally pushes gays, lesbians or anybody, who even slightly differs from the mainstream, to the limit of committing suicide. S/he faced such a society holding his head high, living his life fully, and standing out for the rights of the fellow queer. And he fell victim to that…

Anil’s murder is a brutal signal from the murdering homophobic patriarchy. We have to gather strength together to fight for the right of all trans/queer/nonconforming people to live with dignity and equality.

Anil.A is a human rights activist living with sex workers’ children, for the last 12 years in Thiruvananthapuram, Kerala. He is also the Vice-president of Sangama, Banglore.