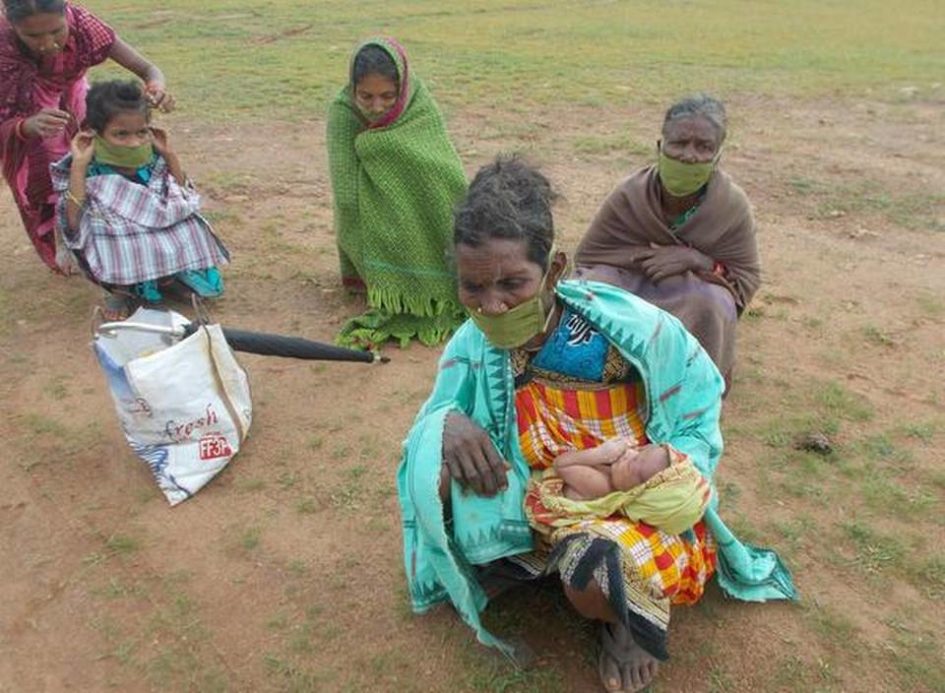 A group of women with a newborn en route to their village inside the Indravati Reservoir in Odisha’s Kalahandi district. | Photo Credit: Biswaranjan Rout

After walking down two hills, taking a boat across a huge reservoir and then finally travelling 30 km on bumpy country roads in a rickety autorickshaw, the actual process of giving birth was not difficult at all for 35-year-old Kusum Nayak.

The labour pains pale into insignificance for the pregnant women of 16 largely tribal villages under the N. Podapadar panchayat in Odisha’s Kalahandi district as they prepare to reach the nearest hospital 35 kms away.

“Labour and giving birth is one of the most exhilarating events in one’s life. However, we undergo an additional pain thanks to the lack of connectivity. The pain is worth taking if the baby is born healthy,” said Ms. Nayak, who gave birth to a baby girl at the Tentulikhunti Community Health Centre in Nabarangpur district.

Three men and four elderly women from Ghutrukhal village escorted Ms. Nayak on July 13 on the walk down the hill road, the boat ride over the 4 km-wide Indravati reservoir and the last leg in an autorickshaw to the hospital.

Earlier on May 24, Chanchala Majhi from the nearby Bhitardunga village embarked upon a similar journey to the hospital.

“Lack of connectivity to the mainland is a curse for us. We cannot access emergency health services like child delivery as no ambulance can reach our village,” said Ms. Majhi, who gave birth to a boy.

The ordeal of the new mothers does not end with childbirth as they face the punishing return journeys home with their fragile newborns.

However, despite the immense challenges, an increasing number of women have been opting for an institutional delivery.

Of the 40 deliveries reported from the water-locked 16 villages in 2019-20, 13 were recorded from the hospital. Further, a majority of women who had delivered their babies at home, came to the hospital for antenatal care.

The deployment of Accredited Social Health Activists (ASHAs) and Auxiliary Nursing Midwives (ANMs) in the 16 villages proved to be the turning point. The health workers persuaded the women to opt for institutional deliveries. Moreover, a conditional transfer of ₹5,000 as maternity benefit under the ‘Mamata Scheme’, referral transport assistance and an additional ₹1,000 in transport costs for women in inaccessible areas have also encouraged them to approach hospitals.

The expenses incurred on institutional deliveries for the women of N Podapadar, however, far exceed the benefits extended by the government. The two-way boat ride across the reservoir and the autorickshaw trip cost around ₹2,200, while a woman is entitled to a transport subsidy of ₹1,400 only. The additional ₹1,000 transport cost announced by the government is yet to reach many of the beneficiaries.

Added to this are the expenses borne by the family members or friends who must needs accompany the woman on the long journey and her stay at the hospital. Each day also means loss of earnings for these daily wage labourers.

Adding to the difficulty is the fact that poor mobile connectivity means the driver of the boat ambulance deployed at the Indravati reservoir cannot always be reached, leaving them waiting often for days to cross and reach their villages.

“Though the women of N. Podapadar end up spending more money than the government incentives, there has been a change in the mindset. They have realised that both the mother and the baby would be safer if the delivery takes place at a hospital,” said Sobha Harijan, an ASHA worker of Ghutrukhal.

“More than 200 villages, mostly in remote areas of Nabarangpur and Kalahandi districts, depend on our hospital. We register about 700 births every year. Despite difficult terrain hindering access to health services, more and more mothers are coming forward for institutional deliveries,” said D.B. Panda, a doctor at Tentulikhunti CHC.

N. Podapadar panchayat lost links to the mainland due to Indravati reservoir project for which former Prime Minister Morarji Desai had laid the foundation stone on April 4, 1978. In the early 1990s, more than 17,000 families faced displacement. Those who did not opt for resettlement continued to live in villages whose surrounding areas were submerged in the reservoir.

Dillip Das, chairman of a Bhawanipatna-based NGO, said more than 200 people have so far drowned in the Indravati reservoir. “In 2014-15, a fund of ₹54 crore was sanctioned for construction of a bridge to connect the 16 water-locked villages. Another ₹60 lakh was sanctioned for expediting the construction of another bridge. However, the bridge that could have been a lifeline remains elusive,” Mr. Das said.

Kalahandi District Magistrate Gavali Parag Harshad said, “We have made several interventions by deploying boats and ambulance boats for people of N. Podapadar. The bidding process for the proposed bridge over the reservoir has been completed. It is awaiting the government’s approval.”

Maa Gruha, a special pre-delivery building with all the facilities, was created especially for pregnant women of N. Podapadar near the reservoir so that they could wait there before childbirth. It is difficult to evacuate pregnant women if they prefer to wait at their homes till the labour pain starts, he said.

The rise in the number of institutional deliveries seems to offer a ray of hope for the health of the children of N. Podapadar. However, the continued lack of access and roads means these children face a life in the many girijan hostels far from home for education.