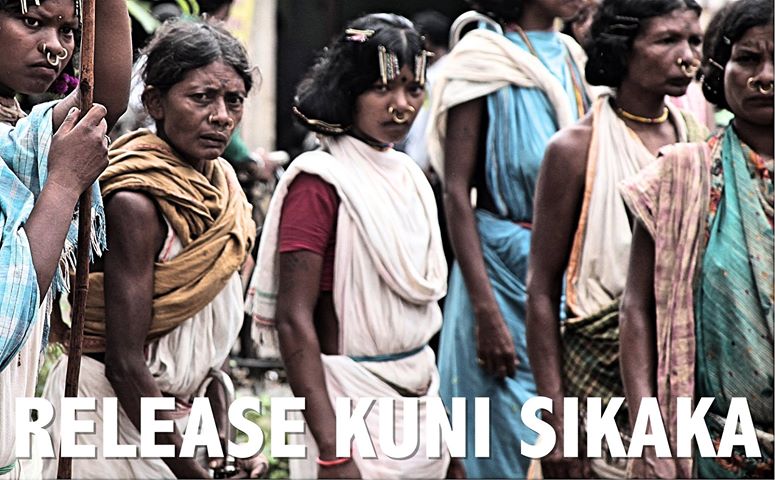 from Lanjigarh and Niyamgiri

On May 2, nighMuniguda police and paramilitary forces raided Gorata, the village of Niyamgiri Suraksha Samiti leader Dodi Pusika and abductedd his daughter-in-law Kuni Sikaka, who is also the niece of NSS leader Lado Sikaka.

The police claims that she is a hardcore Maoist rebel with a prize on her head and anyone trying to prove otherwise would be seen as a Maoist. In one heinous blow the Vedanta–Odisha govt nexus has managed to bring such terrible anguish to the families of both the Dongria Kondh leaders. Kunni Sikaka is Lado’s niece and from Lakhpadar village. She is married to Jagili Pusika, the son of Dodi Pusika, also a vocal anti Vedanta activist.

Youth leader Dasuru and the teenaged Saibo, both from Gorata are in jail for being Maoists. That the police can step into the home of Niyamgiri Suraksha Samiti president Dodi Pusika’s home at midnight and abduct his daughter-in-law without any women police personnel is a clear message from the police how much they care for the law themselves.

The worse part is now which is torture in custody.

In th e above  picture Kuni Sikaka is standing in the middle with Sitari Kadraka, mother of Dasuru Kadraka on her right. This picture  was taken on 2nd Sep last year when Niyamgiri Suraksha Samiti staged a road block demanding the release of Dasuru and other Adivasi Dalit anti-Vedanta activists.

The police wants to break the resoluteness of Dongria Kondh youth activists like Kuni Sikaka by subjecting them to such humiliation and violence as abduction in the middle of the night by an all male paramilitary squad, and right in front of her family. Every single person who has been abducted or detained or picked up by the police in Niyamgiri has undergone brutal torture by the Odisha police and paramilitary troops who are rabid pet dogs of Vedanta and the cannibal Brahmin state.