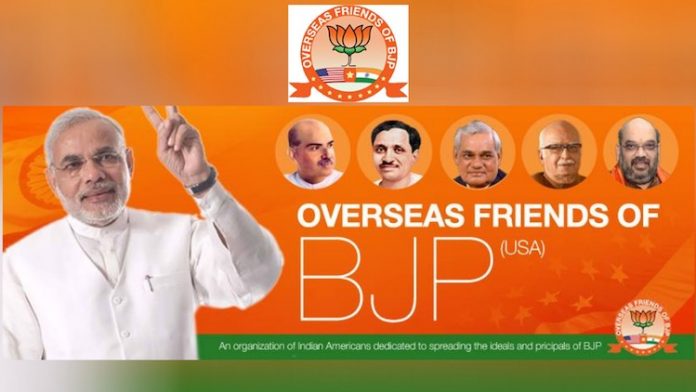 The Overseas Friends of the BJP (OFBJP), after 29 years in operation in the United States, formally registered as a “foreign agent” on 27 August 2020.

Asked what prompted this sudden change in status, OFBJP Vice-President Adapa Prasad told me, “We learned about FARA regulation very recently and upon review of the regulation, we thought it best to register voluntarily.” FARA — the Foreign Agents Registration Act — is a 1938 law which, according to the US Department of Justice (DOJ), “requires certain agents of foreign principals who are engaged in political activities or other activities specified under the statute to make periodic public disclosure of their relationship with the foreign principal, as well as activities, receipts and disbursements in support of those activities.” In other words, US-based actors who lobby on behalf of the Bharatiya Janata Party (BJP) must disclose their expenditures, source of funds, and activities, including their meetings with US elected officials.

OFBJP’s registration highlights a massive shakeup within an organisation that has long served as a huge overseas support base for BJP’s electoral campaigns in India as well as a leading advocate abroad for the party’s agenda.

Four days after the BJP’s overseas wing filed its registration, President Krishna Reddy Anugula — who has served since 2016 — submitted his resignation. “Krishna Reddy ji has resigned due to his family reasons and as the current Vice President, I took over as the working President,” says Prasad. He indicated, however, that there is “another reason,” which he did not detail. In a separate interview, Achalesh Amar — described as OFBJP’s Houston chapter coordinator — suggested that he is no longer with the group, explaining, “There have been lots of changes recently.”

Changes include circulating rumors that the DOJ is investigating the group. Responding to enquiry, DOJ spokesperson Marc Raimondi said, “We don’t confirm or deny the existence of criminal investigations.”

The allegations first emerged on 9 September when Professor Ashok Swain of Uppsala University claimed that there is “a serious attempt going on to suppress this news.” WhatsApp messages he obtained from Vijay Prabhakar — a Chicago-based OFBJP activist who campaigned for the BJP in Tamil Nadu in 2019 — claim that the “OFBJP USA suspends all activities” and the president “abruptly resigned” as there is a DOJ “investigation ongoing.”

The OFBJP swiftly issued an official denial, announcing that it is ”fully functional and is not under any investigation.” However, WhatsApp messages from Swadesh Katoch — an associate of OFBJP and worker with Hindu Swayamsevak Sangh (HSS), the overseas wing of the Rashtriya Swayamsevak Sangh (RSS) — conflict with the denial.

In messages supplied by an anonymous source, Katoch, asked if there is an investigation, says, “Yes. I heard so.” He further states, “OFBJP guys did not know the difference between politics and advocacy. They crossed the line and started advocacy without realising. It was a mistake at OFBJP side. Don’t know much about US laws.” Referring to OFBJP Organising Secretary Vasudev Patel, Katoch says he is “also [in the] soup,” adding that he thinks the group has hired lawyers and may be facing monetary fines, presumably for violation of FARA regulations.

The group was formed in March 1991, said founder Mukund Mody in a 2004 interview, to “propagate the policies and philosophies of the BJP and rebuff the dissemination of disinformation by the vested interests.” He explained, “We have three categories of membership: 200 active members, 2,000 supporters, and more than 20,000 sympathisers.”

Immediate past BJP Foreign Affairs Department head Vijay Jolly, then in charge of the OFBJP, declared in 2015, “We need to touch base with as many among the diaspora as possible and to indoctrinate them with the BJP ideology.” In an August 2014 speech in Atlanta, Georgia, Jolly claimed that, under his leadership, the OFBJP had swelled from two international units — in US and UK — to chapters in 41 countries. “If there would be two Indians even with the Eskimos in Greenland, Vijay Jolly does have a call,” he added.

OFBJP played a key role in Narendra Modi’s election in 2014.

Groundwork for the mass mobilisation was laid as early as 2011, when the OFBJP organised “first of its kind” training camps in New Jersey and Texas which were conducted by the political advisor to then BJP President Nitin Gadkari. In 2013, then BJP vice-president Smriti Irani inaugurated the OFBJP’s annual convention in Florida. Modi, who addressed the audience via video-conference, urged them to “play a meaningful role” in the upcoming election, concluding, “As soon as I finish (my speech), they will start.”

Then OFBJP President Chandrakant Patel said that “nearly 5,000 non-resident Indians” — some of whom, claims political analyst Dilip Hiro, were “hired volunteers” — flew from the US to campaign for the BJP. Within the US, the OFBJP held over 200 “chai pe charchas” in support of Modi and formed “an army of Indian-American volunteers to call their friends and relatives back home.” According to Patel, “Each volunteer is expected to make at least 200 calls.”

Leading up to the May 2019 general election, Anugula reports that over 1,000 volunteers joined phone-banks to make “more than 1 million calls” to Indian voters. When Modi won re-election, the group organised victory parties in at least 20 cities across the US. Over the past year, the group has hosted BJP officials at multiple events throughout the country, including in Illinois, New Jersey, and California.

Currently, reports journalist Soumya Shankar, the OFBJP is “active in 46 countries and boasts of 2,000 registered members and 5,000 supporters across the United States.”

Founded at the height of the BJP’s “Ram Janmabhoomi” movement, OFBJP was intended “to counter the bad press coverage the party was receiving.” Asian Studies expert Isaac McQuistion reports that “its first task was to send out flyers to American lawmakers giving the BJP version of events” after the destruction of the Babri Masjid. “Besides echoing the party line,” the group “makes arrangement for visits of party leaders” to the US and  “ensure that they get a chance to meet US government representatives such as State governors, Congressional leaders, and State Department officials,” writes historian Padma Rangaswamy.

The group’s initial growth was overseen by the BJP’s LK Advani, who visited Los Angeles in 1992 to launch a new chapter. Modi himself reportedly played a role in the OFBJP’s development. Historians Walter Andersen and Shridhar Damle explain that he was “dispatched by the BJP to the US in 1998 to review the activities” of the group. When he was banned from the US after the 2002 Gujarat riots, journalist Rajdeep Sardesai reports that “his NRI supporters, including the Overseas Friends of the BJP, began to vigorously lobby for him at Capitol Hill.”

In 2013, then BJP President Rajnath Singh visited Washington, DC to “appeal to the US government to clear the US visa to the Gujarat chief minister.” One of the few US politicians who met with him, at a meeting in which Vijay Jolly participated, was Congresswoman Tulsi Gabbard, who has faced allegations of a strong connection to both the RSS and the BJP.

Notably, Gabbard was a featured speaker alongside Jolly at the August 2014 banquet where he spoke about expanding the OFBJP even to the “Eskimos in Greenland.”

“All across the country, I heard different people saying that Narendra Modi would not be prime minister of India,” she said at the event. “He is. Why is that possible? Because people like you stood up and said, ‘We’re gonna make this happen.’” Jolly, who spoke after Gabbard, told her in relation to her upcoming re-election to a second term, “We are sure, with the support of the people of Indian origin, the non-resident Indians and, of course, the US citizens, your victory later this year is a foregone conclusion.”

At the event, Gabbard posed for a photo with Jolly while wearing a BJP scarf and holding a biography of Modi. It was both the second time she had headlined an OFBJP banquet and worn a BJP scarf — the first being in June 2014 in Los Angeles. Questioned about it while campaigning for president in January 2020, she responded, “Somebody put something around my neck and snapped a picture without my knowing what it was.”

The OFBJP’s registration as a foreign agent means that, going forward, any such interactions with US elected officials must be reported to the US government.

The changed status of the BJP’s overseas wing also puts a new spin on any future US-based receptions for Modi. Andersen and Damle report that the OFBJP has been “working closely with the HSS to organise Modi’s rallies.” All three of Modi’s major rallies in the US — including New York City in 2014, San Jose in 2015, and Houston in 2019 — have featured heavy organisational involvement by OFBJP leadership or associated activists. In 2014, then OFBJP President Chandrakant Patel and Vice-President Ramesh Shah took a leading role; in 2015, it was former OFBJP President Chandru Bhambhra; and in 2019, it was long-time OFBJP activist and HSS Vice-President Ramesh Bhutada (a patron of the event), his son Rishi (the event’s official spokesperson), and his brother-in-law Jugal Malani (the event’s chairperson).

The change in status also makes clear the direct link between the OFBJP and the BJP. As the FARA registration states, the group “does engage in regular communications with officials of the BJP and, from time to time, acts under the direction or at the request of BJP officials when planning events or distributing informational materials within the US.” No longer is there any doubt that the Overseas Friends of the BJP is controlled — to one extent or another — by the BJP.

Whatever the future holds for the OFBJP — and whether it is actually under investigation or not — it seems certain that (at least in the US) it will no longer be par for the course for the BJP’s international wing.

Pieter Friedrich is a freelance journalist specializing in analysis of South Asian affairs. He is author of “Saffron Fascists: India’s Hindu Nationalist Rulers” and co-author of “Captivating the Simple-Hearted: A Struggle for Human Dignity in the Indian Subcontinent.”