Initially there was little outcry in Muskogee, Oklahoma., last week when a judge, as a condition of a youth’s probation for a driving-related manslaughter conviction, sentenced him to attend church regularly for 10 years. 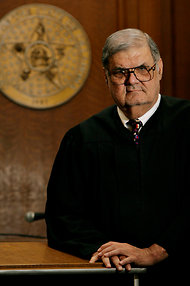 Judge Mike Norman, in his Muskogee courtroom, seemed surprised by the scrutiny. “I sentenced him to go to church for 10 years because I thought I could do that,” he said.

The judge, Mike Norman, 67, had sentenced people to church before, though never for such a serious crime.

But as word of the ruling spread in state and national legal circles, constitutional experts condemned it as a flagrant violation of the separation of church and state.

This week, the American Civil Liberties Union said it would file a complaint against Judge Norman with the Oklahoma Council on Judicial Complaints, an agency that investigates judicial misconduct, seeking an official reprimand or other sanctions.

“We see a judge who has shown disregard for the First Amendment of the Constitution in his rulings,” said Ryan Kiesel, executive director of the civil liberties union branch in Oklahoma.

The 17-year-old defendant, Tyler Alred, was prosecuted as a youthful offender, giving the judge more discretion than in an adult case. Mr. Alred pleaded guilty to manslaughter for an accident last year, when he ran his car into a tree and a 16-year-old passenger was killed.

Although his alcohol level tested below the legal limit, because he was under age he was legally considered to be under the influence of alcohol. Mr. Alred told the court that he was happy to agree to church attendance and other mandates — including that he finish high school and train as a welder, and shun alcohol, drugs and tobacco for a year. By doing so, he is avoiding a 10-year prison sentence and has a chance to make a fresh start.

But his acquiescence does not change the law, Mr. Kiesel and others pointed out. “Alternative sentencing is something that should be encouraged, but there are many options that don’t violate the Constitution,” Mr. Kiesel said. “A choice of going to prison or to church — that is precisely the type of coercion that the First Amendment seeks to prevent.”

Mr. Alred and his family already attend a church, although Judge Norman said in an interview that he had not known that when he ruled.

The judge said he was surprised at the criticism. “I feel like church is important,” he said. “I sentenced him to go to church for 10 years because I thought I could do that.”

He added, “I am satisfied that both the families in this case think we’ve made the right decision,” and noted that the dead boy’s father had tearfully hugged Mr. Alred in the courtroom. If Mr. Alred stops attending church or violates any other terms of his probation, Judge Norman said, he will send him to prison.

As for the constitutionality of his ruling, Judge Norman said, “I think it would hold up, but I don’t know one way or another.”

Judge Norman did not specify which religious denomination Mr. Alred must follow. But he also said: “I think Jesus can help anybody. I know I need help from him every day.”

Randall T. Coyne, a professor of criminal law at the University of Oklahoma, agreed that the judge’s church requirement was unconstitutional. But unless the defendant fights the ruling, he said, civil liberties advocates have no way to challenge it in court, leaving the complaint to the judicial review agency as their only option.

Over the years, several judges around the country have mandated church attendance as part of sentences, sometimes stirring criticism. In the early 1990s in Louisiana, Judge Thomas P. Quirk ordered hundreds of defendants in traffic and misdemeanor cases to attend church once a week for a year. The judge said that he had imposed the condition only on people who agreed to it, and that it provided a good alternative to sending defendants to overcrowded jails or imposing fines they could not afford.

The Judiciary Commission of Louisiana found that Judge Quirk had engaged in knowing violations of the Constitution and recommended that he be suspended without pay for 12 months. But the Louisiana Supreme Court ruled in 1995 that while the judge might have erred, he did not engage in “judicial misconduct,” and it rescinded the sanctions.

In 2011, the city of Bay Minette, Ala., required first-time misdemeanor offenders to choose between doing jail time and attending church weekly for a year. The city dropped the program after the American Civil Liberties Union called it unconstitutional.