On Gauri Lankesh and religion: It is ridiculous to brand her anti-Hindu as her killers are trying to do 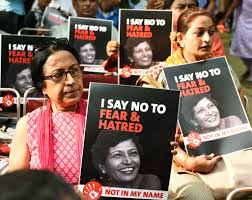 The last few days have been strangely painful and numbing. Men, some of them young, have been justifying a cold blooded murder. Reading the headlines quoting the killers (of my sister), “Gauri was killed for her anti-Hindu ideology,” i have been very disturbed. If media cannot differentiate between Hinduism and Hindutva, how will the common man?

Many people across the country were devastated by Gauri Lankesh’s murder. Many openly gloated at her brutal killing. Others, faceless and anonymous on social media, even celebrated her death. All in the name of ‘Hinduism’. A woman member of BJP Yuva Morcha even posted that a Parashuram, the (name of the) alleged killer of Gauri, should be born in every Indian house. The Sri Ram Sene, which is today claiming that it has nothing to do with the alleged killer, has reportedly sought funds to help his family.

If this article can in any small way change perceptions and garner support for the values that my sister Gauri stood for, i would be satisfied and the memory of Gauri, redeemed. Let me make one thing absolutely clear. Gauri never opposed the religious beliefs of the people. As a family, we celebrated the Ganesha festival as we did Bakr Eid and Christmas, with great joy and fervour.

What Gauri did oppose was the manipulation of people’s faith by vested interests. She was also against fundamentalism in all religions. In that sense she followed Ambedkar who said his respect is reserved for such religion which upholds equality and fraternity. As a corollary she opposed the casteism and patriarchy that is the basis of Hindutva. I recollect reading a dozen of Gauri’s articles condemning patriarchal and fundamental dictums and practices within Islam and Christianity too.

Gauri always believed that people’s faith in God and religion is completely different from organised politics based on manipulating people’s religious sentiments. Then the question arises, was Gauri not religious? Yes and no. If religion is defined as looking for God in every human being, she was religious. If being empathetic about the toiling and oppressed is spiritual, she was most spiritual.

If harming human sensibilities and killing in the name of God is religious, no she was not religious. At a philosophical level she did not dwell deep into the questions of existence of God or any supernatural power. There she followed Buddha. She never considered mediation of God or religion necessary to consider fellow humans as brothers and sisters.

For example, in an article written a few months before her murder, she had made it amply clear that she supports the Lingayat religion as perceived by the working class sharanas of 12th century who propounded an egalitarian social order, against the Vedic Brahminical Hindu social order based on caste and gender discrimination. It is ridiculous, therefore, to describe Gauri as anti-Hindu. It is as ridiculous as belittling Buddha, Basavanna, Narayana guru and Ambedkar on the same charges. Gauri also strongly believed that RSS does not represent the true spirit of Indian civilisation or our religious traditions.

I should also take this opportunity to mention that i am most satisfied with the investigation into Gauri’s murder and the team which led it. Any successful investigation in such ideologically motivated and organised assassinations needs three important components. One, political non-interference and operational freedom. This was ensured by the previous Karnataka government from day one.

Second, most important is an unbiased and ideologically neutral investigative team. Given the growing bias in the state machinery everywhere, the SIT constituted for this case has shown utmost neutrality and made us proud. The last but utmost important aspect is professionalism. The SIT has proved its professionalism in completely cracking the case. It has also reportedly gathered vital leads about the other ideological assassinations of Kalburgi, Dabholkar and Pansare. Hence the team deserves top accolades.

Gauri did not have a child of her own, but she was a mother to many, including my own daughter Esha, who called her Avva (mother), and many others like Kanhaiya Kumar and Umar Khalid. Isn’t it thus a cruel irony that the operation to kill Gauri was named “Amma” even by her killers? How does one contemplate an ideology, or set of beliefs, which demonise human sensibilities, and set in force a chain of events, a plan, to kill one’s amma?

The writer is a filmmaker