ROME (IPS): Children are being smuggled, sexually abused, maimed, killed for their vital organs, recruited as soldiers or otherwise enslaved. Not only: 69 million children under five will die from mostly preventable causes, 167 million will live in poverty, and 263 million are out of school. And 750 million women will have been married as children by 2030.

These are just some of the dramatic figures that the United Nations Children Fund (UNICEF) and other UN and international bodies released few weeks ahead of the World Humanitarian Day (WHD) marked every year on August 19. 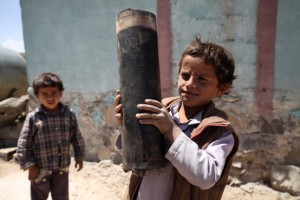 A boy holds a large piece of exploded artillery shell, which landed in the village of Al Mahjar, a suburb of Sana’a, the capital of Yemen. Photo: UNICEF/Mohamed Hamoud

“In places such as Iraq, Nigeria, Somalia, South Sudan, Syria and Yemen, children suffer through aliving hell,” the UN chief said as he opened the Security Council’s debate on children and armed conflict on August 2.

Meanwhile, the future of humankind continues to be bleak, “unless the world focuses more on the plight of its most disadvantaged children,” alerts a United Nations report.

“Denying hundreds of millions of children a fair chance in life does more than threaten their futures – by fuelling inter-generational cycles of disadvantage, it imperils the future of their societies,” on 28 June saidUNICEF Executive Director, Anthony Lake, on the release of The State of the World’s Children, the agency’s annual flagship report.

The UNICEF report notes that significant progress has been made in saving children’s lives, getting children into school and lifting people out of poverty. But this progress has been neither even nor fair, the report flags. “The poorest children are twice as likely to die before their fifth birthday and to be chronically malnourished than the richest.”

Across much of South Asia and sub-Saharan Africa, children born to mothers with no education are almost three times more likely to die before they are five than those born to mothers with a secondary education, says UNICEF’s report. And “Girls from the poorest households are twice as likely to marry as children than girls from the wealthiest households.”

Nowhere is the outlook grimmer than in sub-Saharan Africa, where at least 247 million children – or 2 in 3 – live in multidimensional poverty, deprived of what they need to survive and develop, and where nearly 60 per cent of 20- to 24-year-olds from the poorest fifth of the population have had less than four years of schooling, the report warns.

At current trends, the report projects, by 2030, sub-Saharan Africa will account for nearly half of the 69 million children who will die before their fifth birthday from mostly preventable causes; more than half of the 60 million children of primary school age who will still be out of school; and 9 out of 10 children living in extreme poverty. her twin

The UNICEF report goes on to warn that about 124 million children today do not go to primary- and lower-secondary school, and almost two in five who do finish primary school have not learned how to read, write or do simple arithmetic.

Meanwhile, there is another lost generation—the youth. “Today, over 70 million youth are looking for jobs while nearly 160 million are working, yet living in poverty. These figures embody a massive waste of potential and a threat to social cohesion,” on August 12 wrote Azita Berar Awad, Director of Employment Policy Department at the International Labour Organisation (ILO). 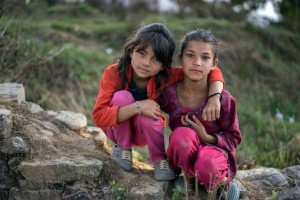 “Youth unemployment and decent work deficits depreciate human capital and have a significant negative influence on health, happiness, anti-social behaviour, and socio-political stability. They impact the present and future well-being of our societies,” she added.

Moreover, Berar stressed, conditions in youth labour markets are changing constantly and rapidly, so are the profiles and aspirations of young women and men who are entering the labour force every day.

“For most, expectations of decent work are not only about earning an income and making a livelihood. Youth see decent work as the cornerstone of their life project, the catalyst for their integration into society, and the pathway to their participation into the broader social and political arena.”

Anyway, this year’s WHD follows on one of the most pivotal moments in the history of humanitarian action: the World Humanitarian Summit (WHS), which was held on May 23-24 May in Istanbul.

The WHS main objective was to mobilise world leaders to declare their collective support for the new Agenda for Humanity and commit to bold action to reduce suffering and deliver better for the millions of people in need of humanitarian assistance.

But while succeeding in attracting world’s attention to the current humanitarian emergency, the Istanbul Summit failed to mobilise the urgently needed funds to alleviate the sufferance of up to 160 million people and growing: as little and affordable 21 billion dollars.

Now, the WHD 2016 will continue communications around the Istanbul World Humanitarian Summit. For instance, the#ShareHumanity campaign, which kicked off last year on 19 August, beginning a global countdown to drive awareness for the WHS.

Previously, the campaign ‘Impossible Choices’ was launched In April this year with a call to world leaders to attend the Summit and to ‘Commit to Action’. The launch of final phase of this UN vast campaign coincides with the WHD on 19 August and will run up until the UN secretary-general presents the Wold Humanitarian Summit Report at the UN General Assembly in September.

Following on this ‘Impossible Choices’ campaign earlier this year, the WHD digital campaign ‘The World You’d Rather’ will launch on 19 August.

Featuring a quiz based on the popular game ‘Would you rather’, the digital campaign will bring to light the very real scenarios faced by people in crisis. After being confronted with challenging choices, users will be able to share a personalised graphic on social media, tweet their world leader and learn about the Agenda for Humanity.

But while the UN starves to raise awareness among political decision-makers and mobilise humanity to take speedy, bold actions to alleviate, end and hopefully prevent the on-going, unprecedented human sufferance, world’s biggest powers continue to spend over 1,7 trillion dollars a year on weapons production and trade.

One Humanity? Yes. But whose? And for Whom?

(Cover Picture: A boy carrying his belongings in a large cloth bag over his shoulder is among people walking on railway tracks to cross from the Former Yugoslav Republic of Macedonia into Serbia. Photo: UNICEF/NYHQ2015-2203/Georgiev)