One Million and One Brilliant Things 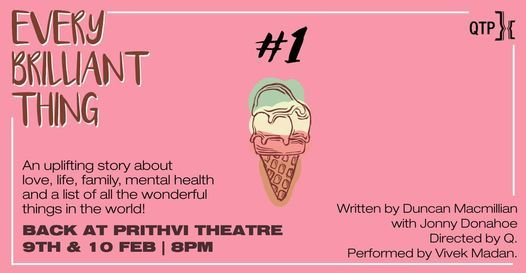 10th Feb 2021, on my Birthday , I returned to theatre -my first love – after a year ,with no expectations at all. The atmosphere at Prithvi Theatre just rejuvenates you, the cosy theatre where you instantly connect even with strangers. For those who have never been to Prithvi Theatre, imagine a place where you can hear the buzz of conversations of theatre enthusiasts and artists who had come together for their love of theatre to watch a play or sit at the Prithvi Café. It has that energetic and lively vibe. No matter how noisy the outside, the moment everyone stepped into the theatre, each of them fell silent as if to respect the stage and the artists. A strict “No late entry allowed” policy, and standing in a Queue – no matter who you are – are part of the overall experience.

For social distancing we had a red guard across with 50% occupancy. My Favourite seat was closed, so took the next favourite centre seat wherein you got a panoramic view of the stage. I need that.

A man started talking to audience with a card board box in hand… What? A donation drive?? But we got tickets right? Nah can’t be that (How past experiences immediately come to mind.) I have done fund raising for various causes by getting a card board box passed across in a meeting, a cultural program. So, very curiously my eyes were following the card board box and it was like when will it come near me to see … WHATS IN THERE …. As he approached my neighbours said. I need your help… can you pick a chit which had a number, as that number will be pronounced on stage you have to say what’s written on the chit, my eyes sparkled.. audience will be participating in the play … Ooh La La …that’s what I always wanted …… and before I could ask, he said : Do you want one?  I pounced and laughingly picked a chit, he said I knew you will definitely help us , I could  sense from the other side of theatre.’

My chit said … 1009- Dance in Public, fearlessly !… and the drama queen already started rehearsing how will I say …… will I dance as well, while delivering my dialogue… zip zap zoom …… stop, I said to my brain.

The person distributing chits was none other than the actor, the one man show of the play, Vivek Madan himself.

The chits were actually a list created by as a 7-year-old to cheer his mother, and himself, with all the pleasures and amusements that make life wonderful. “Ice cream.” “People falling over.” “Kind old people who aren’t weird and don’t smell unusual.” His mother, you see, has just tried to die by suicide .It starts out simply enough: “1. Ice cream, 2. Pillow fights, 3. Staying up past your bedtime and being taken to a movie,4. The colour yellow5. Gully Cricket etc. He gives the list to her mother hoping it will cheer her up. The Boy decides to continue the list up to 100 items, then to 1000.  Every significant event in the boy’s life is marked by the addition of more items until his goal expands to 10,000 items and then to one million.

Almost more than the boy’s life story, the play is about the growth of the list. The bleakness of content is balanced with the playfulness of form.  There were no conclusions drawn about how to solve depression and suicide.

As the numbers were said and audience repeated the line associated, for me it was like a carpet was being woven. It felt like one knew it was a Carpet, but design would depend on the responses of audience which was so organic, impromptu and fluid, and I loved it .

The audience played roles of the father, the lover, the school teacher and reading out the list of every brilliant thing when required. The school teacher was quite innovative to make a sock dog called Moti, with whom the child interacted without any inhibitions.

But the best Scene that hit the chord with me …when my heart screamed with Joy from inside, was the reading of Samaritans guidelines on reporting of suicide – not saying “committing suicide” but “death by suicide”. I was jumping on the inside, (as I am constantly correcting people especially my journo friends) with a Buddha smile on my face, a contrasting yet a surreal emotional experience.

Being a volunteer with Samaritans Mumbai for two years now, what are the chances for me to watch a play on mental health and find my own reflections in the play. The Best ever birthday experience after a long time.

What was particularly moving was watching people listen hard, repeatedly nod, smile, look surprised or relieved and at all times, be more engaged with the play and actor and  each other than might be expected in a brightly lit room full of strangers.  The Play  doesn’t offer soppy fridge magnets or cute GIFS, however, it’s way more honest than that. “If you live a full life and you get to the end without ever once feeling depressed, you probably haven’t been paying attention,” is one of the more telling observations.

Every Brilliant Thing is a heart-warming tale about different kinds of love—filial, amorous and even love for one’s pet. While important issues such as depression, suicide and loneliness are addressed, what the play manages to do is very delicately capture a slice of life—the many experiences and battles in lives that people lack the courage to acknowledge and are, at times, even ashamed to speak about. It’s like a beautiful work of art and is bound to leave you with many thoughts, feelings and questions, not to mention the Buddha smile .

I would say start making your list and add to it seeing Every Brilliant Thing as item 1,000,001.