One Month on, women hold the fort at India farmer protests 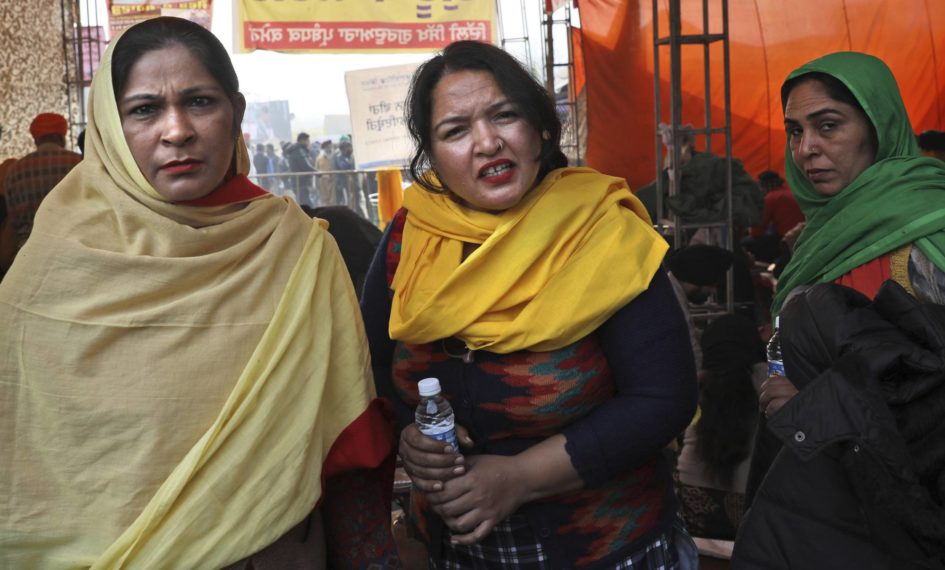 Woman farmer Ramandeep Kaur, 45, center, with fellow farmers leave after helping out in a free kitchen, or langar, during a protest against new farm laws at the Delhi-Haryana state border, on the outskirts of New Delhi, India, Sunday, Dec. 27, 2020. Kaur, a teacher by profession, travelled some 340 kilometers (211 miles) along with her friends this past weekend, and is now part of an impenetrable army of protesters who have threatened to stay put until their demands to abolish the new agricultural laws are met. "After all, we are the ones who toil the most in the farms and feed the country," she said. "Our men are here to fight. We will stand with them as long as it takes." (AP Photo/Manish Swarup)

Tens of thousands of them, marching like an army, driving trucks and trailers, prepared to choke key highways that feed into India’s bustling capital.

But once the male farmers hunkered down and laid a siege of sorts around New Delhi, something remarkable happened over the weeks that followed: A stream of women, young and old, started jostling through a teeming crowd of men.

First, it was a trickle — a dozen or two of them, draped in yellow and green scarfs, accompanying a legion of male farmers who arrived each day at the protest site. Then their numbers slowly started to swell. From students, teachers and nurses to housewives and grandmothers, the women appeared in cars and buses. Some even drove tractors with flags mounted atop bulky metal bonnets that called for a “revolution.”

Now a month into the protests, these women are on the front lines, smiling, laughing, singing songs of revolution and resolutely demanding a rollback of new agricultural laws passed by Prime Minister Narendra Modi’s government that farmers fear will favor big corporations and make family-owned farms unviable, eventually leaving them landless.

The highway is their new home, and they are forming the backbone of the protests and making their voices heard.

“After all, we are the ones who toil the most in the farms and feed the country,” said Ramandeep Kaur, who was at the very front column of the protest site that stretches for miles. “Our men are here to fight. We will stand with them as long as it takes.”

On a normal day, Kaur, 45, would spend long hours teaching science in a government-run school in the city of Bathinda in the northern state of Punjab. At day’s end, she would do the household chores and then work on the family farm, feeding the cattle, milking them and turning their dung into fuel cakes.

But after traveling some 340 kilometers along with her friends this past weekend, she is now part of an impenetrable army of protesters who have threatened to stay put until their demands to abolish the new agricultural laws are met.

The work at the protest site comes with a grueling daily schedule of 10 to 12 hours. During the day, Kaur commands a group of volunteers who make flatbread and curry for thousands of protesters camping on New Delhi’s outskirts. At night, she prepares bedding for dozens of grandmothers who have hunkered down at the protest site, inside trailers and makeshift tents.

“We have long fulfilled the demands of farm and family, making sure both are tended to properly,” said Kaur. “But we don’t want our future generations to say that when men went fighting for a good cause, women stayed back and didn’t raise their voice.”

Nearly 75% of rural women in India who work full-time are farmers, according to the nongovernmental organization Oxfam India, and the numbers are only expected to rise as more men migrate to cities for jobs. Yet, a little less than 13% of women own the land they till.

Participation at the protest site, however, still may not be enough for the women to voice their concerns.

“That fight is for another day,” said Kavitha Kuruganti, a female farm leader who is part of the nearly 40-member farmers delegation whose talks with government representatives to end the impasse have failed so far. “For now, women are here to fight equally like men and to make a point that they are not taking a back seat.”

Kuruganti’s words ring true, as many women who arrived during the first wave of protests are still hunkering down with unflagging resolve. They are unwilling to leave.

On a recent afternoon, a group of grandmothers cooped inside a trailer exuberantly chanted “Haq lenge,” a colloquial Punjabi phrase for “We’ll take what is ours.” With a toothless grin and a clenched fist raised to the skies, their loud chants alerted a passerby who joined the chorus at a protest site that has become a nationwide symbol of resistance.

The grandmothers said they have always stayed behind closed doors, remained busy with their daily chores and barely brushed with politics their entire life. That was until last month.

For over 30 days, the frail but feisty women have camped out on the highways day and night, side by side with thousands of other protesters, braving New Delhi’s bone-chilling temperatures and a pandemic that has killed more than 148,000 Indians.

“I have never been in a protest before, but I would happily die for my land and for my future generation,” said Manjeet Kaur, 60. “We will fight for our rights.”

Women have taken part in recent protest movements across India. A core of so-called “dadis,” or grandmothers, many from a largely Muslim neighborhood in New Delhi, were integral to demonstrations against a discriminatory new citizenship law brought by Modi’s government in 2019 that culminated in violence.

The involvement of social-media-savvy young women has shifted the tenor of the current protests. Many are well-educated daughters of farmers, and they wonder why women shouldn’t be on the front lines.

For weeks, Karamjeet Kaur led awareness marches in her village in Punjab while the men in her family were out protesting in New Delhi. Armed with a smartphone, Kaur, 28, broadcast the visuals of protests from her village to thousands of her followers on Instagram.

“People had to know that women were even protesting from their homes,” she said.

Kaur said she was aware of the “uphill task” the farming community was facing but didn’t realize what it actually took to keep the fight going until she decided to come down to New Delhi herself.

The temperatures in the capital have plummeted to their lowest in recent years, and hygienic sanitation facilities for thousands of female farmers remain a challenge at the protest site. Worse, the fears of getting infected with the coronavirus always loom large.

“But we are prepared to stay until Modi abolishes these black laws,” said Kaur.

Her family had initially been resistant to her taking part in the protests, “but now they know why I am fighting,” Kaur said, sweeping the roadside clean with a wooden broom as a bustling crowd walked past her.

“We thought Modi would give us jobs, but all he has done is brought us out on the roads,” she said. “And we will stay on the roads.”

When the Delhi Police identified a man by his clothes and detained him, on Modi’s cue
Armed guards at India's dams as drought grips country
Mumbai University- 1 of every 4 varsity students seeking revaluation passed: RTI
The System that Silences Rapes- Tracking Four Sexual Assault Survivors cases in Uttar Pradesh