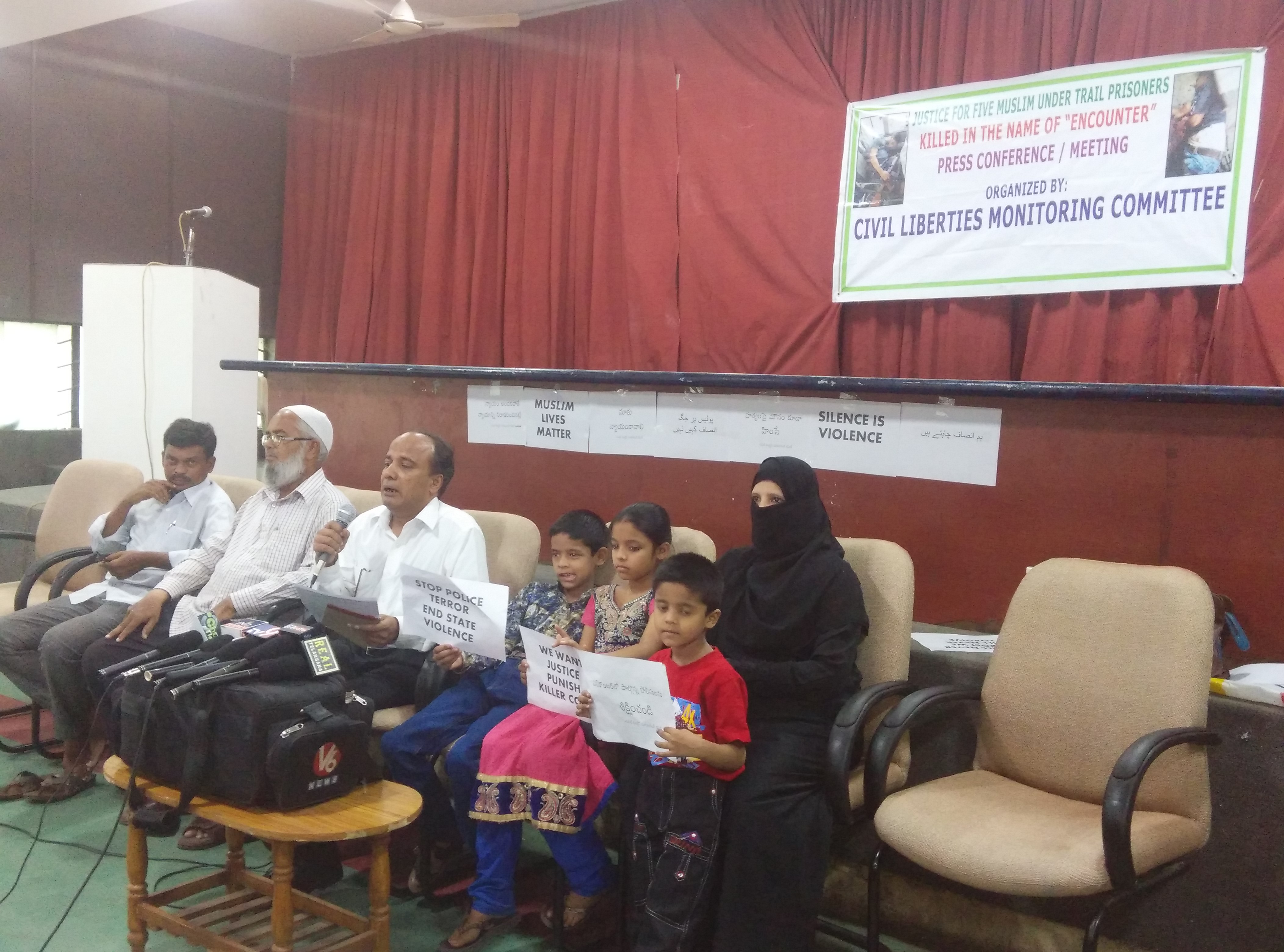 Rule of Law dismantled by its very Guardian institutions

Demand for justice and punish the culprits

Civil Liberties Monitoring Committee wants to remind all the concerned citizens, the state and the media that one year is completed for the brutal killing of five Muslim under trial prisoners in the name of encounter at Aler town of Nalgonda district of Telangana state. The family members of the victims are struggling every day to reckon with the reality of how the whole state machinery conspired to deny them basic legal rights. But still they are waiting for the justice to their loved ones who were killed in the encounter.

To remind you all once again, on 7th April 2015, five Muslim under trial prisoners namely Viqar Ahmed, Syed Amjad, Mohd. Zakir, Dr. Mohd. Haneef and Izhar Khan who were lodged in the Warangal central prison, were being brought to be produced before Hon’ble VII Asst. MSJ Court Nampally, Hyderabad. They were killed by the escort police on the way at the Aler town. All the five deceased under trails were handcuffed and chained to their seats as was evident from the images and videos of the encounter site.

In the immediate aftermath of this brutal killing the family members of the victims and the Civil Liberties Committee made representations for registering a case u/s 302 of IPC against the police personnel for opening the fire on helpless prisoners and also demanded for the Judicial Magistrate investigation u/s 176 (1) (A) of Cr.P.C.

The newly formed Telangana state has become a police state. The Chief Minister of Telangana Mr. K Chandrasekhar Rao who had given many assurances to the Muslim community during the movement has turned off his promises. Instead of fulfilling his promises for the upliftment and development of the Muslim community, five Muslim youth who were under trial were killed by his police in a gruesome manner. After this killing, question was raised in the Assembly, the CM answered that the Assembly would discuss this issue in a detailed manner but one year has passed, Chief Minister does not have time to discuss and he did not fulfill his promise. The TRS government has taken ‘U’ turn on the promises given to the people of Telangana. The KCR government did not even initiate judicial magistrate enquiry u/s 176 (1) (A) CrPC. On the other hand, in an atrocious move Chief Minister, K. Chandrasekhar Rao led TRS government ignored the demands; instead the state itself registered an attempt to murder case against the prisoners who died in the police firing.

The enormity of impunity enjoyed by the guilty police officers can be understood by the act of the government of issuing a G.O. to form an SIT in which they described the murdered under trails as ‘terror operatives’ (none of the victim was ever convicted in any case). The G.O. which was supposed to appoint a Special Investigation Team for investigation also jumped to its conclusion that ‘five terror operatives were killed in exchange of fire, when they tried to snatch weapons from the escort party and opening fire at them’, government mockingly handed over the so called investigation to a police officer with dubious credibility. In this manner, the Telangana police is given free hands to suppress the innocent people; the tainted police officers are given awards and rewards in this state. There is total impunity on police brutalities.

The five Muslim youth killed were under the custody of judiciary, it was the responsibility of the judiciary to protect them. But even the judiciary failed in this matter. And not only this, the judiciary did not even take serious note of this brutal killing; it should have taken suo motu and ordered for enquiry under section 176 (1) (A) of Cr.PC which is mandatory as per Supreme Court and NHRC guidelines for the encounter killing by the police. But this has not happened. The family members of the victims and the Civil Liberties Committee approached the High Court through Writ Petitions No. 12453/2015, 10759/2015, and 12855/2015 in the hope that justice will be done. But sadly in this particular encounter case the judiciary did not give any hope of justice, disregarding justice even basic hearings have been denied. Moreover, such a serious crime by the police is dumped by the judiciary. This shows the double standard of not only the police, state but also judiciary. If justice is denied by the judiciary, where will the victims go and how will they get justice.

The role of Muslim ruling class is highly condemnable. They have completely failed at the time of crisis to fulfill their responsibility by using political pressure on the government of Telangana to provide justice to the victims of the encounter killing. People of Hyderabad are in great shock that even though Muslim political class is powerful they did not save the youth of their community. The community is even more concerned that even after the completion of one year of cold blooded murder; the Muslim political class has failed in getting justice to the families of the victims. As per the victims family version, they were active and in forefront till the completion of funeral of the encounter victims and then slowly disappeared. It is strongly believed that from Makkah Masjid bomb blast to Aler fake encounter, Muslim political class of Hyderabad did not act as per the demand of the time. Now they are maintaining silence on this issue and have forgot that ‘silence is violence’.

Muslim minority’s emotions are high, their confidence has been shaken and they strongly believe that neither the government, the judiciary nor the Muslim ruling class are not serious to provide the justice. There is double standard of justice in the court and even in National Human Rights Commission. This committee also feels that it is impossible to get fair justice from this government and state judiciary. Under these circumstances, this committee appealed to the Hon’ble Chief Justice to intervene into this matter and provide speedy justice to uphold the confidence of the people on judiciary. We requested the Chief Justice of Apex Court to take this matter as suo motu PIL in the greater interest of justice. But that also has not worked out.

Therefore this committee demands the following:

#Racism in Mumbai - No Flats for Muslims in Bandra
No means no, says judge and convicts lawyer for harassing female colleague #Goodnews
Youth in quarantine refuses to eat food prepared by Dalit cook
Modi Ji 20-lakh crore ‘Magnum Opus’ Is ‘Jumla’ On the People of India !