Open Letter to Amit Shah- Why have you excluded these 900,000 tribals , listed in minorities in Bangladesh ? 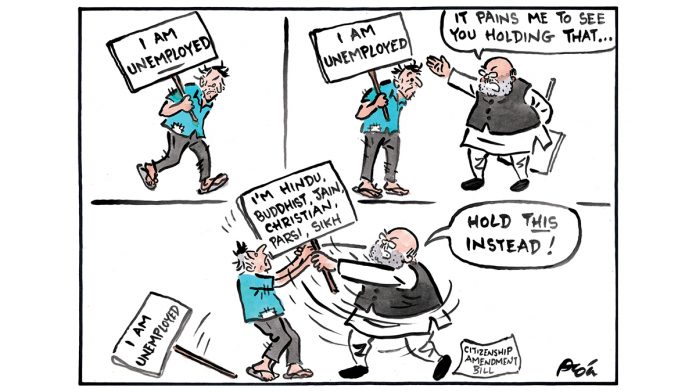 The scathing letter wonders why has Amit Shah sought to exclude these 900,000 tribals while seeking to provide citizenship to the persecuted minorities from the minorities through the Citizenship Amendment Act (CAA). They “do not go to temples, mosques, churches, gurudwaras, derasaris, or synagogues. They simply worship nature”, he says.

“No Indian citizen should fear the Citizenship Amendment Act 2019.” Well said Amitbhai! My sisters and brothers who are Hindus, Jains, Buddists, Sikhs, Parsis and Christians who entered India as illegal migrants due to the religious persecution they had to face in Afghanistan, Pakistan and Bangladesh will now have a reason to sigh with relief.

Thanks for being so considerate and thanks for your deep compassion for suffering humans. They and all Indians will be beholden to you for your immense kindness in redressing the suffering of the persecuted. But, then, there are others too.

The Mro ethnic tribal community in Bangladesh has its own gods. The Mro tribals do not go to temples, mosques, churches, gurudwaras, derasaris, or synagogues. They simply worship nature. Not being fully familiar with their idea of divinity, anthropologists and the Census describe them merely as ‘animistic’. And the Mro is not the only community in question.
There are also the Meitei, Tripura, Marma, Tanchangya, Barua, Khasi, Santhals, Chakma, Garo, Oraons, Mundas, Marmas, and Tripperas. A majority of the them, from eleven tribes, live in the Chittagong Hill tracts. They are listed in Bangladesh as ‘minorities’.

The tribals have been citizens of an Islamic Republic for a long time and, like you, are scared of religious persecution. Bhai, why have they missed your grace? Is it because they are tribals and because the RSS may frown upon tribals who refuse to own being Hindu?

The Bangladesh official statistics shows that nearly 900,000 of these tribals continue to live there and, going by pre-Independence enumerations, an equal number (?) may be now working and residing in Mizoram, Meghalaya, Tripura and Assam. What of them?

So many have already tried to educate you on the ‘other’ orders of Islam such as Shi’a; Ahmadis who face religious persecution in Pakistan. Quite frankly, we understand your unease with anything Islamic; but when the compilation of the National Citizen Register gets under way, what do you propose to do with the Sufis, the Madaris, the Darvesh, the Bauls — all begging mercy in Allah’s name — who have no definite locations, no IDs, nothing to prove their ancestry and residence? Would they be the first lodgers in the detention camps you have so promptly created?

Well done in having 311 ‘yes’ buttons pressed in the Lok Sabha and 125 in Rajya Sabha to support your motion. Did you or they know that at the press of that button, you have permanently disenfranchised large numbers whose voice will probably never reach you?

These include, first and foremost, the 13 crore odd Denotified and Nomadic people belonging to more than 200 odd communities spread across the country. These were the communities that got wrongly branded as ‘criminal’ by a Criminal Tribes act (1871) during the colonial times and were brought out of the stigma by Jawaharlal Nehru who initiated their ‘denotification’ in 1952.

They had obviously missed the bus as they were ‘non-citizens’ for the purpose of the 1951 Census exercise. And, after that date when the first National Citizens’ register was compiled by the Census, it was always too late for them. Except for a few less unfortunate communities, they could neither get into the lists of Scheduled Tribes nor in the list of the Scheduled Castes.
You are right, Amitbhai, in arguing that had Nehru not signed an agreement with Pakistan’s Liaquat Ali Khan, you would not have had to get into the whole business of accepting persecuted Hindus from other countries as Indian citizens. Your firm commitment to restructuring all that Nehru stood for is admirable.

What do you propose to do with the Sufis, the Madaris, the Darvesh, the Bauls — all begging mercy in Allah’s name

But, what about the Denotified Tribes (DNTs) of India, still selling balloons at the squares and crossings of our cities, who do not have any form of identification, neither the Aadhar card, nor a gas connection, nor an electricity bill, and certainly not a passport? Nehru had opened up their detention camps in 1952 and freed them. Would you like to belie that promise and push them back to the detention camps they suffered from 1871 to 1952?
Of course, it was Nehru, and Nehru always, who started all trouble for us, whether Kashmir or secularism and the denotification of the detained communities. Narendrabhai has been telling us for the last six years that it was Nehru, Rajiv and the Congress that have been the source of all our miseries.

You, Narendrabhai and your predecessors in the RSS have been telling us that India’s understanding of secularism has been deeply flawed. It is a pity that many of us pseudo-secularists just do not understand that everybody and anybody in Bharat is Hindu, no matter what they claim as their religion and no matter who they think they are.

You are no doubt aware of how vehemently the desh-bhakts troll every other idea of history of this country that extols our composite traditions invoking Buddha, Basavanna, Kabir, Mira, Nanak, and Gandhi when an odd non-entity is lynched. These things happen when cows are perceived to be in trouble.
Well done, in keeping Kashmir ‘closed’ for so many months, in disallowing those who will ask unnecessary questions and allowing only an invited delegation of like-minded Europeans to visit Kashmir to see and admire how quiet Kashmir has now become.

Well done also in telling the country after the firing by police at the Jamia Milia campus that the trouble-makers will be punished, and for clamping 144 over half of India when the protests against the Citizenship Act surfaced. We still recall how you had ‘controlled’ the Gujarat riots and handled all riot related cases with complete devotion to your Idea of India.

However, Amitbhai, as India was watching protests on TV sets or participating in it, this winter of discontent was a slightly different one. It was not your usual detractors the ‘tukde-tukde-gang’ that was in the picture.
The protesters had students and young citizens in large numbers not belonging to any political band. They were saying strange things like ‘all humans are humans first.’ They claimed to be citizens of India — though not in agreement with you — and wanted their Idea of India to remain alive. Amitbhai, is it possible that something is wrong somewhere?

You are normally not prone to self-doubting. But do you not think a time comes for everyone when questioning one’s action and thought become necessary? Do you not think that the citizens of this country who want to think of citizenship going beyond religion, language, gender, while thinking of citizenship, have a message for you? Do think, citizen Amitbhai.