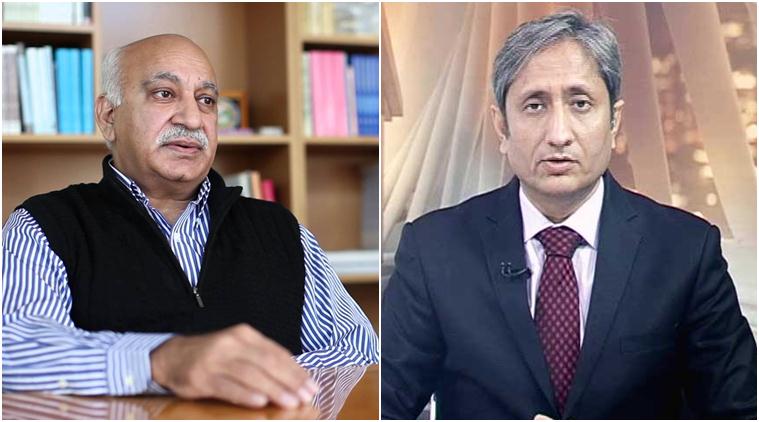 Eid Mubarak. That you have become the Minister of State for External Affairs is no less a special occasion than Eid. We journalists should be very happy that you first became a spokesperson for the Bharatiya Janata Party and then a parliamentarian and now a minister. You fought an election on a Congress ticket. Then you came back to become an editor. Then you again went from an editor to a spokesperson and then a minister. Perhaps I will never know what you thought about journalists becoming netas and the work ethics that come into play with that.

Did you ever pass through a crisis of conscience? Even though there are no Gods in journalism, during these times, did you ever fear God?

Akbar ji, I am writing this letter to you with a certain degree of bitterness as well. But you are not the reason for that. You may help me out of it. For the last three years I have been called a pimp on social media. The political change that veteran journalists like you call great for India has also forged the culture of shouts of “pimp” and “hustler” trailing news stories and news bringers. It has come so far that even my mother has been called a whore – a woman who could never go to school, who does not even know what an anchor is, or what is prime time. She has never seen the studios of NDTV. All she asks is if I am keeping well. But she does read the newspaper very closely. When she found out that I am abused like this, she could not sleep well for days.

Akbar ji, when you came from journalism into politics, did people call you a pimp too, abuse you, vilify you – like they do me (especially after the episode with the black screen aired?) Then when you came back from the Congress into journalism, did people – especially the then opposition whose member you are today – see you as a pimp for 10 Janpath (the headquarters of the Congress) or any other party? What explanations did you give yourself then to carry on? Can you share those explanations with me? I need your help.

In journalism, I have done many a bad report. Some have been exceptionally terrible. But until three years ago, no one used to call me a pimp. Neither did they drag in my sister or mother into it. Akbar sir, I am not a pimp. But do tell me what should I do to become Akbar. When Murli Manohar Joshi used to be a minister in the Vajpayee government, I used to debate the saffronisation of education a lot. Back then, no one in your party office spoke to me with hostility. Dr Joshi even had tea served to me after interviews and asked for sweets to be brought in. He never said you are asking these questions because you are a pimp of the Congress. Due to his age, he often got angry but never did he decline an interview or hint the government was annoyed at me.

But now everything has changed. There is a new culture of political control. There is now a horde of people who try to find political leaning and meaning behind every news story. This horde is flagrantly abusive. They often use the photo of our Prime Minister on their profiles and use symbols of the Rashtriya Swayamsevak Sangh. Many of them follow ministers and many are followed by ministers. They identify some as against the BJP and heap praises on the rest.

Definitely there has been a decline in journalism. It wasn’t there at all when you fought an election, won, lost and came back to become an editor. That must have been the golden age of journalism. It can be called the Akbar age if those who abuse us don’t take offence. All this means that today some journalists have become an unannounced extension of the spokesperson. Those who abuse me don’t call these people pimps. The section that does is the same that trolls Smriti Irani.

As a colleague, in your Foreign Ministry, you will find General VK Singh who coined the word ‘presstitute’ for journalists. In Hindi, the crowds that agree and support him call us ‘preshya’ – a combination of press and vaishya (prostitute). Because I work for NDTV, they replace N with an R and call it Randi TV.

Do you think when journalists ask difficult questions, they are pimping another party? Which question can make one a pimp? If editors like you can tell me, I can learn a thing or two. I can tell young reporters don’t become Ravish Kumar, if you must become somebody become Akbar because maybe even Ravish Kumar will one day become an Akbar.

I am a bit of an emotional person. I’ve definitely been shaken by these attacks. That’s why after seeing you, I thought you could help me. For the last three years, before every report, I have been struck by the thought that those people who are celebrating India’s cultural ascent may call me a pimp and my mother a whore, but my mother is the only real Mother India. I am bringing up my mother again and again because people of your party understand ‘Ek Ma ki bhavna‘ the best. When you take the name of your mother, it’s the end of an argument.

When you returned to journalism from politics, did you worry about the party and its ideology when writing about them? Were you able to hold your ground? How firmly? When you returned to politics from journalism, did you start doubting what you wrote? Did you ever feel that you wrote what you did expecting a reward? I believe that we journalists write in the pressure of our times and context. Switching between journalism and politics, can one be free from these moral dilemmas? Did you manage to do it?

To avoid being like Twitter trolls, I don’t want to bring up what you wrote about the riots in the country including Gujarat. I am just asking this on a personal level. Even before you, people from a number of media organisations have gone to the Rajya Sabha. With the Congress, you fought for the Lok Sabha, and with for the BJP, you fought for the Rajya Sabha. I am happy that Prime Minister Narendra Modi has kept this tradition of the Congress government alive of putting journalists in Parliament. People singing the praises of Indian culture perhaps did not notice that popular Atal ji was himself a journalist and after becoming Prime Minister, he could not abandon his love for his paper Veer Arjun. You can find quite a few other examples.

I haven’t jumped into politics just yet. If I do, you will be of great help. That is why you should tell me what journalists should do. Should they fight elections, become ministers, and then become journalists again? Will they be able to report then? When one becomes a reporter in the name of national interest, should they always be on the lookout of political opportunities?

I hope that in the name of principles, those who hurl abuses are welcoming you. They should also shower flowers on you. Your competence is without doubt. You are a hero for all of us. Those of us who consider journalism to be a religion could not see how you have upheld its rituals. Because anchors these days show their importance based on their TRPs, I would say I am a zero-TRP anchor. The TRP meter tells me no one watches me. On these grounds, you can overlook my letter. But being a minister, you are principally answerable to each and every citizen of this country. So based on this, you can respond. The one with the top TRPs won’t ask you how a minister can respond to someone with zero TRPs. And that too a Minister of State for External Affairs. Once again, Eid Mubarak. From the heart.