Open letter to To Sonu Nigam, with love

‘How did you sleep through the cries of a Mohammad Akhlaq, or a Pehlu Khan being beaten to death? Did you then tweet, ‘Goondagardi hai, bas’?’ 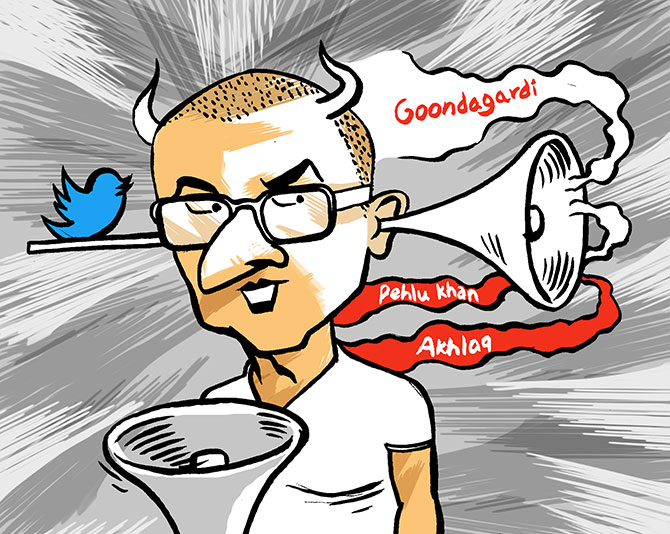 Please wake up. It is high time.

I see your face on every newspaper and TV channel, and I must admit that the bald and beautiful look suits you, just as much as your gorgeous locks did.

I also admire the fact that you stood by your words and rightfully demanded the Rs 10 lakhs promised you by some troll maulvi, who suddenly emerged from oblivion for his brief moment in the limelight, thanks to you.

But what is the uproar all about? Let us go back to your tweets, that have sent birds of all feathers aflutter — from religious fanatics to champions of ‘the right to freedom of expression’ — and unleashing a new national debate in the process.

You start by tweeting: ‘God bless everyone.’ So far so good. God knows we are all in need of a blessing, now more than ever.

‘I‘m not a Muslim and I have to be woken up by the Azaan in the morning. When will this forced religiousness end in India,’ you ask.

It is a valid question and your reasoning is ‘sound’. An Indian is subject to noise pollution almost every moment of his life — be it the honking of cars, the bursting of crackers or, horror of horrors, the loudspeaker at every imaginable occasion! Any sane citizen ought to be in complete agreement with you.

After all, not disturbing another’s peace with our own religiosity is plain good sense. But, is it also in good spirit to raise this question during a time when divisive forces are screaming louder than ever?

It reeks of privilege and insensitivity — somewhat like complaining of the weather, a first world problem, when children are starving in Africa.

And it must be more than annoying to have one’s life or that of a loved one’s, suddenly snatched away by a bunch of gau rakshaks?

How did you sleep through the cries of a Mohammad Akhlaq, or a Pehlu Khan being beaten to death? Did you then tweet, ‘Goondagardi hai, bas’?

You next say: ‘And by the way Mohammed did not have electricity when he made Islam.. Why do I have to have this cacophony after Edison? I don’t believe in any temple or gurudwara using electricity to wake up people who don’t follow the religion . Why then..? Honest? True?’

Flawless logic again. Except that ‘cacophony’ is subjective. What is ‘music’ to one may be ‘noise’ to another and vice versa. Just the way your tweet may seem very meaningful to one and unnecessary din to another.

Also, is forced religiousness the only source of noise pollution in our country? What about forced nationalism? If there is no need to be loud in our religious displays there shouldn’t be a necessity for loud displays of patriotism either. Honest? True? Hope you will soon tweet about this nuisance too.

I am not a Muslim, you say, and that you are a secular, liberal human being. According to you, this category of people is a minority in our country, and that is truer than you imagine. Liberals today are the fringe elements, and gau rakshaks, mainstream. But a charge often laid against liberals is that of selective outrage. Hope you are not going to be guilty of the same.

It is high time we wake up to all instances of forced religiousness and goondagardi, not ‘some’. We cannot cry racism abroad unless we do the same when Africans and North Easterners are assaulted closer home.

Fanaticism, too, can lurk in the recesses of our own hearts, not just in the easily identifiable garb of a ridiculous maulvi announcing a fatwa. (I do hope that man is forced to pay up!)

I would like to believe that the true spirit of our country is embodied in Pooja Bhattji’s tweet (which I came across in connection with yours): ‘I wake each morning to the sound of church bells & the azaan in a quiet bylane of Bandra. I light an agarbatti & salute the spirit of India.’

This spirit lies dormant somewhere, suppressed by the loud voices of disharmony and discord. It is this quiet spirit that must awaken now, so that we can truthfully sing with you,

Perhaps it is a good thing that you’ve been forced to wake up, Sonuji.  For much more is at stake, than just your sleep.