The international association DAFOH (Doctors Against Forced Organ Harvesting) is fighting unethical and illegal organ harvesting. Forced organ harvesting, the removal of organs from a donor without obtaining prior free and voluntary consent, is not only a gross violation of medical ethics but also a violation of the rights to life, health and bodily integrity. DAFOH is especially focusing on China, since in that country the largest number of organs have been harvested without consent.

Evidence collected since 2006 points out that the source of the bulk of Chinese transplant organs are prisoners of conscience, who are killed in the process of the organ extraction. An estimated 65,000 Falun Gong practitioners were victims of forced organ harvesting between 2000 and 2008. Falun Gong is a Chinese spiritual practice that combines meditation and exercises with a specific moral philosophy. Practioners have been persecuted by the Chinese government since 1999 as the movement is seen as a threat to national security; many members have been incarcerated. Their tissue compatibility has been systematically analyzed and stored in data banks. This process allows Chinese transplant surgeons to provide donor organs including kidney, heart, pancreas, liver, skin, and cornea on short notice.

“Purchasing organs for transplantation is ethically speaking arguable, a gray zone. However, in China, transplant medicine has crossed the line and gone beyond this gray zone. In contrast to the global phenomenon of organ trafficking where the donor stays alive, organ procurement practices in China are mostly based on the “intended death” of the donor.” (Executive Director of DAFOH, Torsten Trey, in the book States Organs, p. 18)

Mounting evidence tells a terrible tale of mutilation and murder in China. Witnesses and Chinese physicians reveal that persons affiliated with the Falun Gong cultivation practice are being killed for their organs, bones, and tissues, which are sold and transplanted at enormous profit. The perpetrators are officials of the Chinese Communist Party (CCP), acting in collaboration with surgeons, police, prison authorities, and military officials. Victims are held in concentration camps prior to having their organs harvested. As many as 36 such camps are said to exist, the largest holding up to 120,000 persons. Multiple accounts suggest that a flurry of organ harvesting is now taking place, coupled with the killing of camp detainees; CCP authorities are reportedly hastening to destroy all evidence of the organ harvesting atrocity. The move follows exposure by Western media and human rights groups. 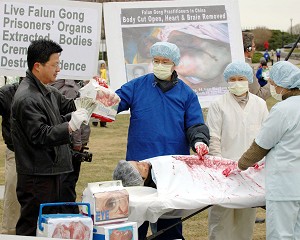 A re-enactment of organ harvesting from living Falun Gong practitioners for profit, at an event exposing the CCP’s organ harvesting crimes. A heart or liver can fetch hundreds of thousands of dollars. Overseas patients are major recipients of Chinese organ transplants.

Chart from the Orient Organ Transplant Center Website (http://www.ootc.net ) (Tianjin City) showing escalating numbers of organ transplants since 1999, when the persecution of Falun Gong started. The website claims, “from January 2005 to now, we have done 647 liver transplants – 12 of them done this week; the average waiting time is 2 weeks.” The chart indicates that from virtually a standing start in 1998 (when it performed only 9 liver transplants) by 2005 it had completed fully 2,248.

The Coalition to Investigate the Persecution of Falun Gong in China (CIPFG) established. CIPFG is a group founded by the Falun Dafa Association and Clearwisdom website after the underground concentration camp in Sujiatun was exposed. The organization was formally established on April 4, 2006. Its mission is to form a coalition of relevant international organizations, state agencies and media, requesting to go to China to conduct an independent, direct, interference-free investigation of the details of the persecution of Falun Gong in China. CIPFG plans to collect evidence, and completely search for the truth of the persecution of Falun Gong, including the Sujiatun concentration camp and other secret camps located elsewhere, to end this 7-year brutal persecution.

April 9, 2006
News surfaces that illegal organ harvesting is occurring in all slave labor camps across China.

The UK’s Sky News takes camera undercover inside Chinese hospitals where nurses and doctors confirm readily-available organs are taken from “prisoners” and that the hospital’s abundance of “donors” is due to its close connections with Chinese security forces. (watch)

Dr. Wenyi Wang gains access to the White House South Lawn with a temporary press pass and draws attention to the persecution. During Chinese Communist Party leader Hu Jingtao’s opening remarks, Wang calls out for Hu to stop the persecution of Falun Gong. Wang is taken away by U.S. secret service agents and makes headlines around the world with her act of civil disobedience. When asked by media why she took this action, Wang explains that she has worked closely on the developing story of Falun Gong practitioners being killed in large numbers in concentration camps, their organs harvested for transplant surgery. Distraught by the horror of what she had uncovered, she sought to tell Hu directly that the atrocities must be stopped.

April 23, 2006
China’s international transplantation network assistance center (http://en.zoukiishoku.com) removed their website that had previously boasted that a suitable kidney donor can be found in 1-4 weeks. The site had also said that if the first organ is found by the doctor to be unsuitable, a new organ will be offered “in one week.” Normal wait times for such a transplant in the west is 1-3 years.

Criminal complaint in Boston accuses Chinese delegates to transplant conference of complicity in torture. A legal complaint filed in Boston charges directors of organ transplant centers in China with overseeing forced removal of body parts such as hearts, livers, and kidneys from living bodies of imprisoned Falun Gong practitioners. Two Chinese doctors, Chen Zhonghua and Zhu Tongyu, were named in the complaint while they were attending the World Transplant Congress annual conference in Boston’s Prudential Center. A third doctor, Shen Zhongyang, was added on the morning of July 26.

US congressional hearing tells of Falun Gong practitioners being slaughtered for organs. As many as 40,000 Falun Gong practitioners, who committed no crime, have been secretly put to death in Chinese hospitals and their organs sold “on-demand,” investigators told a United States Congressional committee in Washington, DC. The hearing pointed out that little is being done to stop the ongoing killing.

Australian senators Andrew Bartlett (Democrats) and Kerry Nettle (Greens) and MP Chris Bowen (Labor) jointly held a press conference outside the Australian Parliament Building to announce the establishment of the Australian Delegation of the Coalition to Investigate the Persecution of Falun Gong (CIPFG). The delegation demands the Chinese Communist regime to open all labor camps and hospitals in order to allow CIPFG members to perform an independent investigation into the persecution of Falun Gong and the harvesting of organs from Falun Gong practitioners.

International Human Rights Day, the Coalition to Investigate the Persecution of Falun Gong (CIPFG) Asia Delegation was formed. It is another regional delegation of CIPFG after the establishment of the Australian Delegation. There are ninety members in CIPFG Asia, including local council leaders, administrative leaders, non-governmental leaders, figures from human rights circles, law, medicine, professionals and media outlets.

After near half a year’s continuous investigation, Canadian investigators Mr. David Matas and Mr. David Kilgour have more evidence to support the allegation of the Chinese Communist Party’s (CCP) organ harvesting from living Falun Gong practitioners. On the morning of January 31, the two investigators released their revised report, “Bloody Harvest – Revised Report into Allegations of Organ Harvesting of Falun Gong Practitioners in China”. The revised report expanded the previous 18 considerations to 33.

The revised report contains 16 new items of proof and disproof, including interviewing organ recipients, the large number of practitioners tortured to death or missing, large-scale construction of organ transplantation centers in China after the persecution, profit-making by China’s military and medical system, the difference in ethics and law between China and other countries, the development of organ transplantation technology, and the large numbers of unidentified Falun Gong practitioners in detention.