Oppose the Brahmanical Hindutva Fascist Ban on PFI, NCHRO and Other organizations 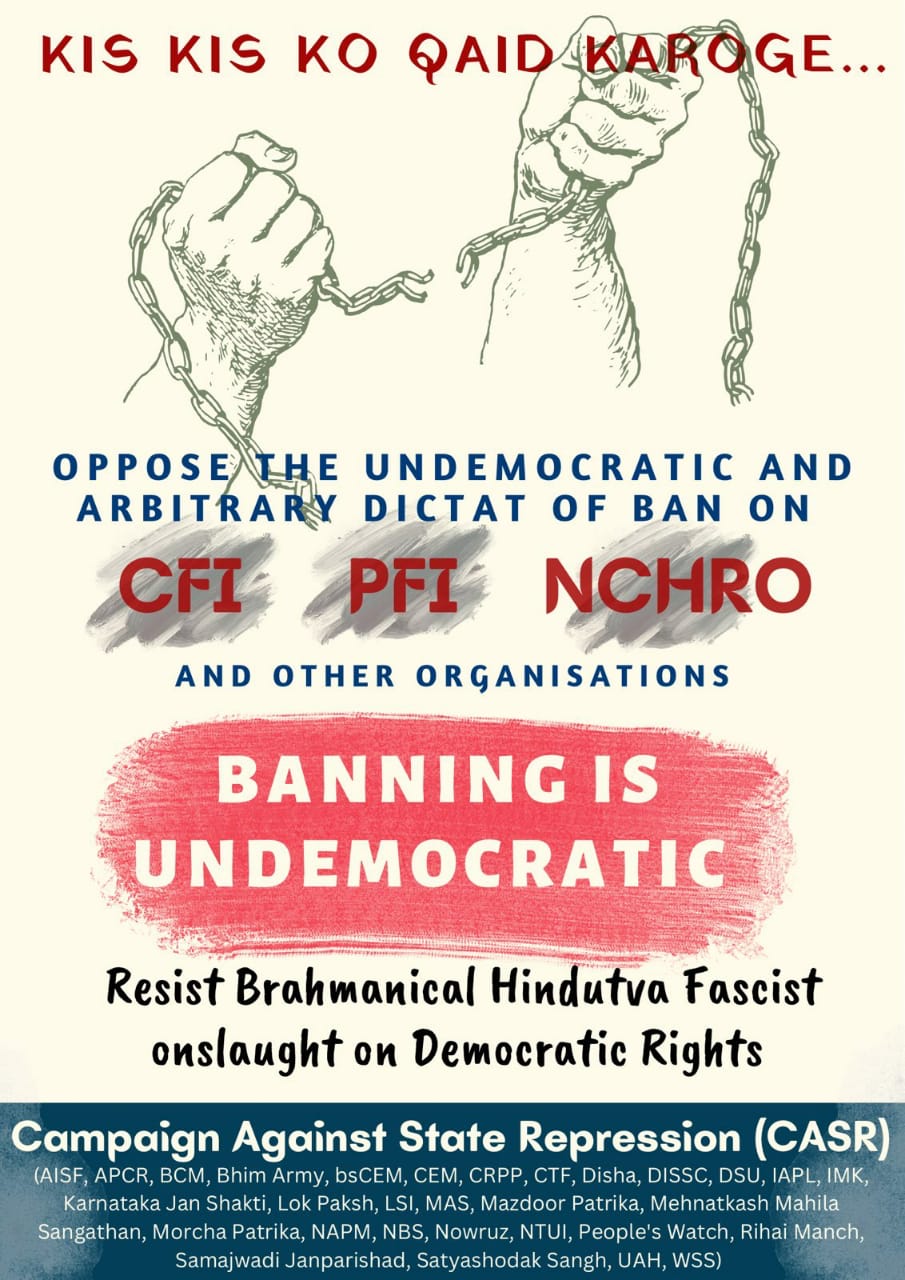 Resist the attack on oppressed Minorities!

This ban came after a week long crackdown of two waves of raids carried out through joint operation code named “Operation Octopus” comprising of NIA, ATS, RAW, ED, CRPF and RAF, in which almost 350 activists have been arrested or detained, many of whom have not been presented in court. The arrestees include Professors, Lawyers, Students and community activists. PFI and other above mentioned organisations have been banned by the Brahmanical Hindutva Fascist government because it feels threatened by each and every force that has the potential to fight Brahmanical Hindutva Fascism on ground. It wants to isolate and attack every force by tagging them as “terrorist organization”, “anti-national” “urban Naxal” etc.

According to NIA’s press note dated 22nd September 2022, two rounds of  raids were conducted on various locations of PFI, in 16 states, in relation with 5 cases, namely, (RC 14/2022/NIA/DLI, RC 41/2022/NIA/DLI , RC 42/2022/NIA/DLI, RC 2/2022/NIA/KOC, RC 3/2022/NIA/HYD) on Charges that PFI leaders and cadres were involved in funding of terrorism and terrorist activities, organising training camps for providing armed training and Radicalizing people to join banned organization. These 5 cases, alleging the cadres of providing arms training and etc., along with murder cases of Mr. Sanjith (Kerala, 2021) and Mr. Praveen Nettaru (Karnataka, 2022) are the material grounds for ban, presented by this fascist government. The allegations should be analyzed in historical context of how such cases have unfolded in later stages of trial. The recent acquittal of 127 activists of SIMI (banned under the very law) is one such example. It is also important to bring into notice, past record of allegations of providing ‘arms training’ by the PFI members. In Bihar’s  Phulwari Shareef, the police registered an FIR against PFI members in July 2022, alleging them of providing arms training, following which a vilification campaign against PFI was launched in newspapers. The People’s Union for Civil Liberties, Bihar Unit, a respected civil rights organisation conducted a fact finding in the matter and found that ‘prima facie, there were no training camps held’. This frivolous framing of charges isn’t a new one and it can’t be ignored while we look at the present cases being slapped against the PFI. The 5 cases registered by NIA under UAPA has not even been probed properly let alone go on trial, where trial itself is a punishment. Further, the above mentioned murder case allegations against PFI cadres are also not proved. Even if the murder cases and the other 5 cases are to be proved, which is unlikely considering the less than 2 percent conviction rate of cases under Draconian Law like UAPA, it is still not a reasonable and justifiable ground for ban and stands as blatant arbitrary attack on democratic rights of oppressed minorities. Furthermore, if India is anymore, a democratic country, it should uphold the position of plurality of thoughts and dissenting views and organisations having such dissenting views rather than banning them. By arbitrarily banning organizations because of their thought process, the BJP-RSS government is making known it’s objective of dismantling any democratic ethos that this country has. Though we do not support actions such as severing Prof. Joseph’s hand, we iterate that ban on organisations having dissenting opinion should not be accepted as an ‘attempt to safeguard democracy’.

PFI was formed to struggle on the question on socio-economic concerns of Muslim minorities and it also included in its perspective to forge broader solidarity with other oppressed and Exploited groups such as Dalits and Adivasis to fight for a just society and proper representation of Muslim community in the political sphere. The Brahmanical Hindutva Fascist forces know that the broader unity of the oppressed and Exploited communities will be a force to reckon with and hence they want to break this chain of unity by attacking every link. The repression that has been unleashed on the Cadres of PFI and other organizations at unprecedented levels is matter of concern because it’s also a brutal state crackdown on democratic right to unionize and dissent. This attack should be seen as a part of continuing attack on the larger democratic movement in India and should be fought back.

What equally concerning is the targeting of NCHRO, an umbrella organisation of democratic, civil and Human rights forces that has a history of working extensively on the state repression on oppressed and Exploited communities, be it Fact finding in Pograms, indiscriminate incarceration and slapping of draconian penal charges of Muslim people, the social exclusion of Dalit people in Villages of Haryana or the attack on Labour struggles such as that on Mazdoor Adhikar Sangathan in Kundli, NCHRO has always took a democratic position and stood by the oppressed and Exploited. It is this reason that democratic rights organization such as NCHRO has been targeted by associating it with PFI without any proof.

It is also pertinent to point out that this repression should be seen as an attack that started back with Anti CAA-NRC-NPR movement because of PFI and other organization’s role in organizing the masses and struggling against Anti-muslim and anti-democratic law brought forth by the BJP-RSS. Since then, the Brahmanical Hindutva Fascist government of Uttar Pradesh has been hell bent on portraying the PFI as “unlawful organization” and had recommended the central government to ban the organisation. This attack on a political force that resists Brahmanical Hindutva Fascism, is not a first one and this spree will not end with PFI.  The draconian law UAPA that provides the state to unleash such repression, arbitrarily without any substantiation and proof, has been a tool to jail thousands of people and activist fighting for the rights of oppressed and Exploited communities. This law should be recognized as a weapon of crackdown on democratic rights and should also be fought unitedly.

Afraid of the opposition to the Fascist diktat, the government has deployed hundreds of paramilitary forces and imposed section 144  in ghettoised Muslim localities such as Batla House, Jamia Nagar and Shaheen Bagh (once the epicenter of Anti CAA-NRC-NPR movement) to terrorize and vilify the Muslim community at same time. The Brahmanical Hindutva Fascist government is hell bent to curb any protest and demonstration against this fascist diktat of ban and people  are being detained and arrested. This kind of attack on right to oppose or criticize  any step of government should be conceived as an attack on the very democratic values of the people.

We, Campaign Against State Repression, urge all democratic, progressive and pro-people forces to unite in this hour of Brahmanical Hindutva Fascist upsurge and repression and oppose the ban on PFI, NCHRO, CFI,  Women’s Front, Junior Front, Rehab India Foundation ,  All India Imams Council, Empower India Foundation and Rehab Foundation, Kerala. We call upon the broader masses to fight against this brutal crackdown on democratic rights to unionize and dissent.

We demand the following:-