Opposed by Dave last year, wildlife board denotifies forest in Ranthambore for mine #WTFnews 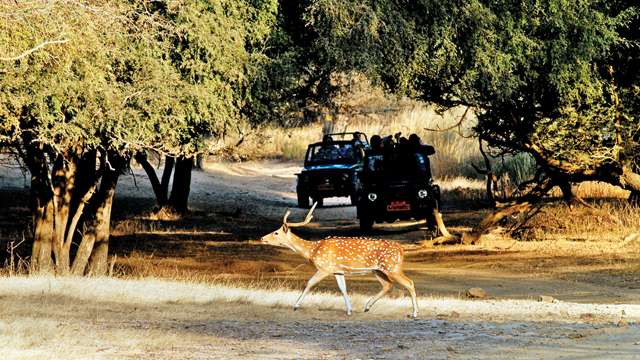 The decision to denotify was taken even as the matter is sub-judice before the National Green Tribunal.

Initially opposed by the National Tiger Conservation Authority (NTCA), the National Board for Wildlife (NBWL) has recommended denotification of 409.88 hectare of forest from the buffer area of Ranthambore National Park (RNP) for ACC Limited‘s mining project.

The decision to denotify was taken even as the matter is sub-judice before the National Green Tribunal. NTCA had opposed the denotification on grounds that it would affect dispersal of tigers to neighbouring areas, affecting their genetic diversity and had instead suggested mining for a period of eight years. This solution was acceptable to former environment minister, Late Anil Dave.

ACC’s Lakheri Chamavoli limestone mine in Bundi district feeds their cement plant, which is the oldest in the country.

The NBWL’s decision came after a full-body meeting of NTCA, chaired Dr Harsh Vardhan, Minister for Environment, Forest and Climate Change (MoEF&CC) recommended the denotification proposal on September 4. During the meeting, environment secretary Ajay Narayan Jha and Director General of Forests Siddhanta Das favoured denotification of the forest land prevailing over NTCA’s opposition to the proposal. The top officials felt that since the mine was supporting an old cement plant, the forest should be denotified, sources privy to developments said.

The decision though, did not go down well with a few members of the NTCA. Nagendra Singh, Member of Parliament from Khajuraho, Madhya Pradesh opposed the move to denotify and stated that it would set a bad precedence, sources added.

According to sources, NTCA has added a condition that denotification of the forest should be subject to the outcome of the plea before NGT.

When the proposal to denotify was discussed in NTCA’s technical committee on October 7, 2016, it had said that mine falls in the southern boundary of the park, the buffer area of the tiger reserve, thus mining would be violation of the Wildlife Protection Act, 1972. As a middle way out, NTCA had recommended that instead of denotifying the forest land, the mine could operate for eight years, till 2023, as reserves would exhaust during that period. NTCA’s recommendation were accepted by Dave last year.

The ministry’s decision assumes significance as it comes just weeks after a study of National Centre for Biological Sciences (NCBS) that found that Ranthambore tigers were isolated and have the least genetic variation and thus need more habitat connectivity. Tissue samples from 38 tigers were collected to study genome sequencing to arrive at the conclusion that tigers in northwest have least genetic variety while those in Central India have highest variation.http://www.dnaindia.com/india/report-opposed-by-dave-last-year-wildlife-board-denotifies-forest-in-ranthambore-for-mine-2545401