Orwell was hailed a hero for fighting in Spain. Today he’d be guilty of terrorism

The International Brigades are acclaimed for bravery. But British citizens who fight in Syria are damned. If only they did it for the money 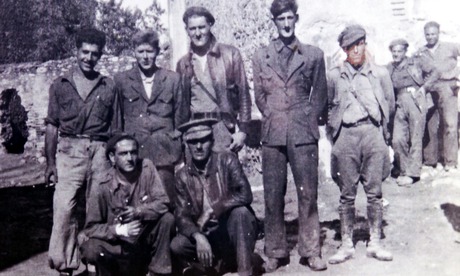 ‘The British government did threaten people leaving to join the International Brigades, by reviving the Foreign Enlistment Act. But the act was unworkable.’ Photograph: Christopher Thomond

If George Orwell and Laurie Lee were to return from the Spanish civil war today, they would be arrested under section five of the Terrorism Act 2006. If convicted of fighting abroad with a “political, ideological, religious or racial motive” – a charge they would find hard to contest – they would face a maximum sentence of life in prison. That they were fighting to defend an elected government against a fascist rebellion would have no bearing on the case. They would go down as terrorists.

As it happens, the British government did threaten people leaving the country to join the International Brigades, by reviving the Foreign Enlistment Act of 1870. In 1937 it warned that anyone volunteering to fight in Spain would be “liable on conviction to imprisonment up to two years”. This was consistent with its policy of non-intervention, which even Winston Churchill, initially a supporter, came to see as “an elaborate system of official humbug”. Britain, whose diplomatic service and military command were riddled with fascist sympathisers, helped to block munitions and support for the Republican government, while ignoring Italian and German deployments on Franco’s side.

But the act was unworkable, and never used – unlike the Crown Prosecution Service’s far graver threat to British citizens fighting in Syria. In January 16 people were arrested on terror charges after returning from Syria. Seven others are already awaiting trial. Sue Hemming, the CPS head of counter-terrorism, explained last week that “potentially it’s an offence to go out and get involved in a conflict, however loathsome you think the people on the other side are … We will apply the law robustly”.

People fighting against forces that run a system of industrialised torture and murder and are systematically destroying entire communities could be banged up for life for their pains. Is this any fairer than imprisoning Orwell would have been?

I accept that some British fighters in Syria could be changed by their experience. I also accept that some are already motivated by the prospect of fighting a borderless jihad, and could return to Britain with the skills required to pursue it. But this is guilt by association. Some of those who go to fight in Syria might develop an interest in blowing up buses in Britain, just as some investment bankers might be tempted to launder cash for drug dealers and criminal gangs. We don’t round up bankers on the grounds that their experience in one sector might tempt them to dabble in another. (The state won’t prosecute them even when they do launder money for drug gangs and terrorists, as the HSBC scandal suggests.) But all those who leave Britain to fight in Syria potentially face terrorism charges, even if they seek only to defend their extended families.

Last week a British man who called himself Abu Suleiman al-Britani drove a truck full of explosives into the gate of Halab prison in Aleppo. The explosion, in which he died, allowed rebel fighters to swarm into the jail and release 300 prisoners. Was it terrorism or was it heroism? Terrorism, according to many commentators.

It’s true that he carried out this act in the name of the al-Nusra Front, which the British government treats as synonymous with al-Qaida. But can anyone claim that liberating the inmates of Syrian government prisons is not a good thing? We now know that at least 11,000 people have been killed in these places, and that many were tortured to death.Pictures of their corpses were smuggled out of Syria by the government photographer employed to record them. There are probably many more. That combination of horror and bureaucracy – doing unspeakable things then ensuring that they are properly documented – has powerful historical resonances. It haunts us with another horror, and the questions that still hang over the Allied effort in the second world war: how much was known, how much could have been done?

As no one else is now likely to act, and as the raid on the prison would probably have been impossible without the suicide bomb, should we not be celebrating this act of extraordinary courage? Had David Cameron not lost the intervention vote, and had al-Britani been fighting for the British army, he might have been awarded a posthumous Victoria Cross.

When you think of the attempt by the British battalion in the Spanish civil war to defend a place they called “Suicide Hill”, with the loss of 225 out of 600 men, do you see this as an act of terror – a suicide mission motivated by an extreme ideology – or as a valiant attempt to resist a terror campaign?

Sue Hemming claims it is “an offence to go out and get involved in a conflict”, but that is not always true. You can be prosecuted if you possess a “political, ideological, religious or racial motive” for getting involved, but not, strangely, if you possess a financial motive. Far from it: such motives are now eminently respectable. You can even obtain a City & Guilds qualification as a naval mercenary. Sorry, “maritime security operative“. As long as you don’t care whom you kill or why, you’re exempt from the law.

I expect that’s a relief to Sir Malcolm Rifkind, the former foreign secretary who now chairs parliament’s intelligence and security committee, where he ramps up public fears about terrorism. For several years he waschairman of ArmorGroup, whose business was to go out and get involved in conflict. The absence of one word from the legislation – financial – ensures that he is seen as a scourge of terrorism, rather than an accomplice. The British fighters in Syria should ask their commanders to pay them, then claim they’re only in it for the money. They would, it seems, then be immune from prosecution.

Talking of which, what clearer case could there be of the “use or threat of action … designed to influence the government … for the purpose of advancing a political, religious, racial or ideological cause” than the war with Iraq? Tony Blair’s ministers were, of course, protected by crown immunity, but could they have experienced no flicker of cognitive dissonance while preparing the 2006 act?

Whatever you might think of armed intervention in Syria, by states or citizens, Hemming’s warning illustrates the arbitrary nature of our terrorism laws, the ring they throw around certain acts of violence while ignoring others, the risk that they will be used against brown and bearded people who present no threat. The non-intervention agreement of 1936 was not the last elaborate system of official humbug the British government devised.