Outrage over the culture of rape in #India #Vaw #delhigangrape 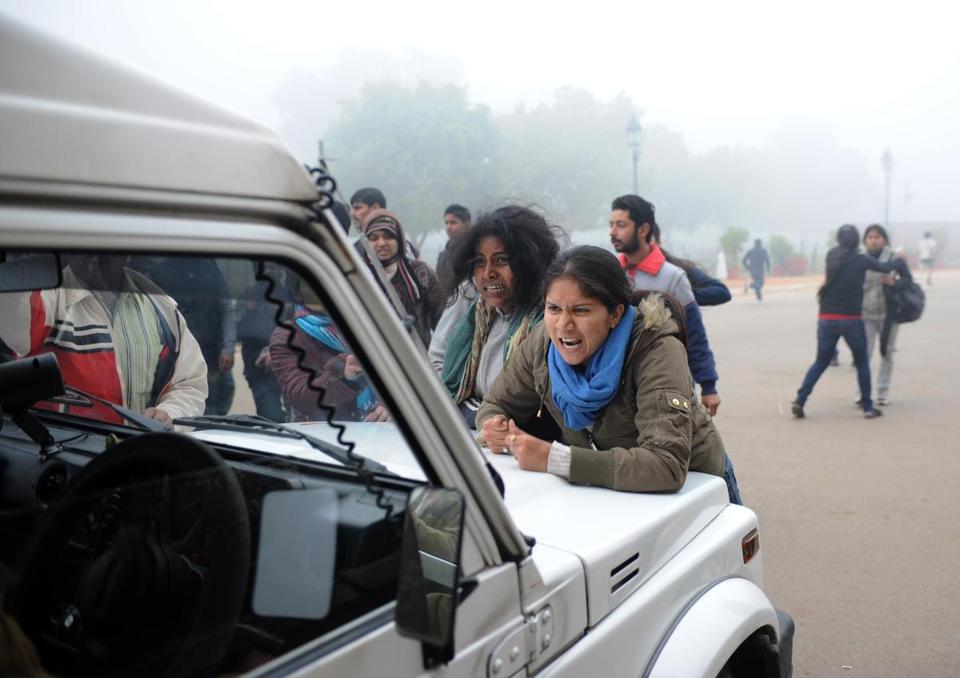 Demonstrators attempt to stop a police car during a protest calling for better safety for women in NewDelhi on Dec. 23. Several thousand students attended the protest, where they were met with water cannons and tear gas by the police.

IN 2011, 24,206 rape cases were reported in India. That’s 66 per day — excluding the many rapes that go unreported for reasons that are as abusive as rape itself. A Thomson Reuters Foundation global poll revealed that India is the fourth-most dangerous place in the world for women. Even in the financial hub of Mumbai or the national capital New Delhi, young girls reaching puberty are advised not to look into the eyes of male passersby. More and more working women keep pepper spray with them at all times, and some keep hairpins. This happens even though the outgoing president of India is a 78-year-old woman; three Indian states have women as heads.

Yet if a rape victim is said to have “asked” for it, her family is doomed. Rapists are rarely arrested; far too often, the rape is never proven, and everything is forgotten.

Nonetheless, the recent gang rape and subsequent death of a 23-year-old woman in the nation’s capital has made headlines around the world. Thousands gathered in various cities in India to condemn the incident; two separate candlelight vigils took place in Boston and Cambridge last weekend, and several more were held across United States. The placards and the plethora of commentaries from across India have named the deceased victim “Damini” (‘‘lightning” in Hindi), or “Nirbhaya” (“fearless one”).

Why did this particular incident gather public attention? Was it because the woman and her male friend — who was also stripped and beaten — were gravely injured? Was it because it took place in the capital city? Whatever the reason, it marks a major change from the denial that usually follows such incidents.

Women in the innards of the country face oppression at every stage of their life — that is, if the female fetus is not killed in the womb. Women in cities face harassment at the workplace, on the transport system, on streets. Upon going to the police station to register complaints, they are often given a lecture on forgive-and-forget. Female cops face sexual assault themselves from their colleagues.

Yet, this momentum created over the last two weeks is crucial because it gives out a single message: “Enough.” Consider the bare facts of the case: The woman was a physiotherapy intern whose father had sold off his agricultural land to educate her. She had gone to watch a movie in Saket that evening with her male friend. Saket is a plush area of New Delhi with several malls with several international brands. This is the face of “emerging” India — a face that tries too hard to look Western, even as women fight it out from their humble upbringings to chart out a career and an identity. It is the story that resonates with almost every Indian woman who has faced molestation at least once in her life, either by a close acquaintance or a stranger.

Would there have been an expression of outrage if the victim had been a cleaning woman? The same week of this incident, there were four other rapes from different parts of the country that were reported on the news. Could it be that the Delhi incident generated so much noise because the alleged perpetrators held petty jobs as driver, fruit seller, and gym instructor?

There was no acrid call for the death penalty or chemical castration — some of the outrageous demands of angry protesters over the last two weeks — when a woman named Manorama Devi was raped in custody by army soldiers, and later murdered, in the northeastern state of Manipur in 2004. There was no immediate remedial response from the government even after 40 women from Manipur stripped naked and shouted “Indian army rape us” before the army headquarters, after the Manorama incident. Another woman named Aruna Shanbaug has been lying in a vegetative state in a hospital in Mumbai for the last 40 years, after her rapist — a ward boy in the same hospital where she was a nurse — tried to asphyxiate her by tying a dog’s chain around her neck. The rapist is free today after serving seven years in prison. Meanwhile, several leading politicians have been accused of sexual assaults.

Clearly, the issues that lead to an outcry are selective. Yet, it would be wrong to dismiss this current wave of protest, which drove people out of their homes with candles and placards in their hands, ready to face the water cannons of a combative police. These protests have managed to force the government to set up a committee to reform rape laws. But there again, the myopia of the government is obvious: It has offered just one e-mail address and a phone number for suggestions. Large parts of India still have no electricity in their homes, let alone access to a computer or Internet. And these are also the places where rapes go on, unreported, and forgotten just as easily as they take place.