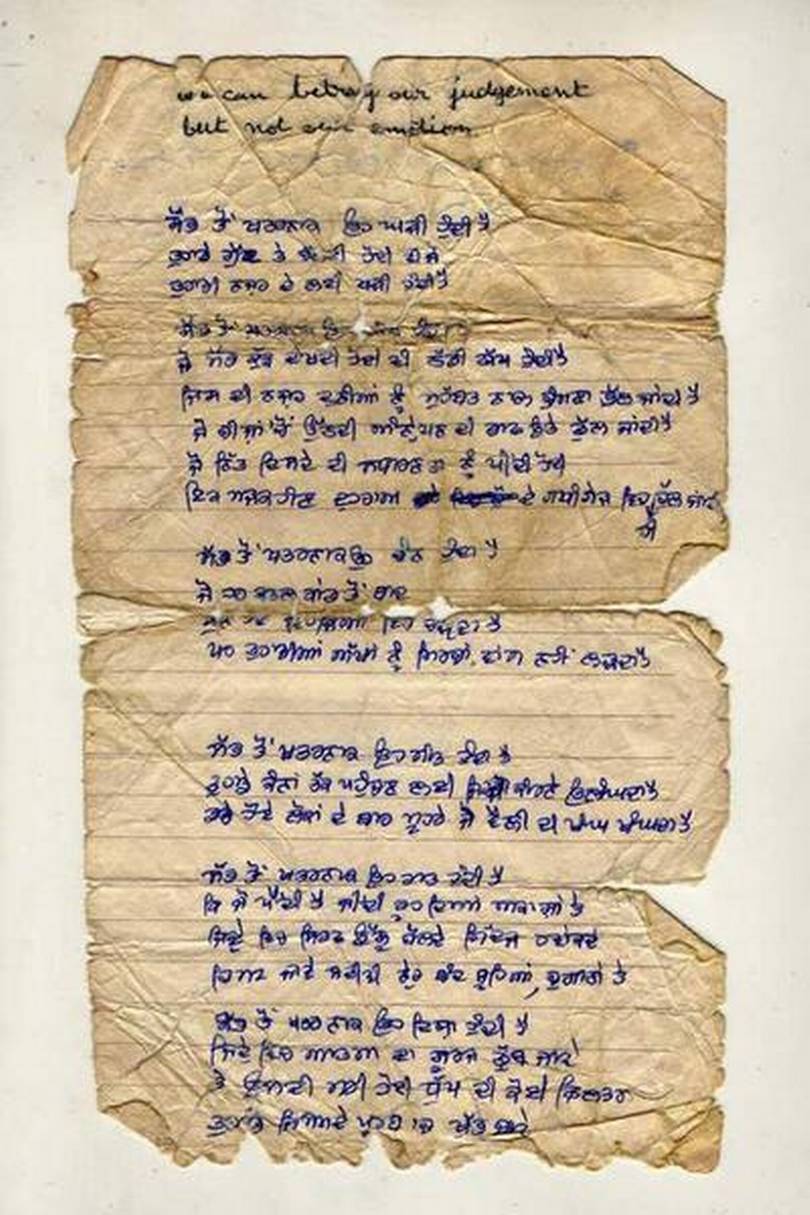 Paash's poem "Sabh Tun Khatarnak" in his own handwriting

As we commemorate 70th birth anniversary of Paash.A spectre is haunting India – the spectre of urban Naxalism or Maoism. People are being made to believe that dangerous killers are hiding in the garb of teachers, writers, media persons, lawyers, actors and filmmakers, allegedly conspiring to assassinate the beloved Prime Minister of India, and derail the fast train of development under his stewardship

The whole idea behind these NIA raids and arrests, with the support of the over-excited ‘nationalist’ media, is to silence the critique which is beyond the parliamentary political sphere. This is not only an attack on this articulate section.  The real targets and victims would be the tribals and Dalits who still need educated voices from within and outside to speak and act for them.

The NIA has arrested three persons including a woman, all members of the outlawed CPI(Maoist)’s frontal organisation, in connection with the Bhima Koregaon Elgar Parishad case,

Sagar Tatyaram Gorkhe, 32, and Ramesh Murlidhar Gaichor, 36, were arrested on Monday while Jyoti Raghoba Jagtap, 33, was arrested on Tuesday, an NIA spokesperson said. They all are residents of Pune.

Paash was a revolutionary poet and an activist from Punjab, India (September 9, 1950 – March 23, 1988). His poetry reflects the state of suppression and immorality of his times. One of the most influential works of Paash is his poem Sab ton Khatarnak (The Most Dangerous).  In this poem, he rejected the ideas of things we fear versus the realities of life.

‘The Most Dangerous’ – A Translation of  ‘Sab ton Khatarnak – Paash’

The most dangerous occurrence is not a robbery of hard work,

The most horrifying act is not torture by the police,

A merger of betrayal and greed is not the most dangerous.

To be trapped while asleep is undoubtedly miserable,

To be buried under the silence is undoubtedly miserable,

But it is still not the most dangerous.

To remain silent in the noise of corruption is undoubtedly miserable,

Reading covertly under the light of a firefly is undoubtedly miserable,

But it is still not the most dangerous.

The most dangerous deed is to be filled with dead silence,

Not feeling any agony against the unjust and bearing it all.

Getting trapped in the routine of running from home to work and from work to home,

The most dangerous accident is the death of our dreams.

The most dangerous thing is that watch which runs on your wrist, but stands still for your eyes,

The most dangerous is that eye; which witnesses it all but remains frozen,

The eye that forgets to kiss the world with a passion,

The eye lost in the blinding haze of a materialistic world,

The eye captivated in the aimless monotony of life.

The most dangerous is the moon which rises in the numb yards after each homicide,

But it still does not bother your eyes.

The most dangerous is the song which mourns to reach your ears,

And sounds like a knock of a goon at the door of the frightened people.

The most dangerous is a night which covers the sky of living souls,

In which only owls scream and wolves growl,

With everlasting darkness covering all the doors and windows of existence.

The most dangerous is the direction where the sun of soul sets,

And a ray of dying sunlight pierces the east of your body,

The most treacherous is not the robbery of hard work,

The most horrifying act is not torture by the police,

A merger of treachery and greed is not the most dangerous.

If you wish to read the original poem of Paash

The Sangh Parivar ideologue Dinanath Batra had demanded IN 2017 the removal of a poem by Paash, the revolutionary Punjabi poet, from an NCERT textbook, claiming it will “pollute” young minds.

The , walls in New Delhi had suddenly started sprouting slogans about a revolution that is around the corner. Usually the slogans are in Hindi, occasionally in English, and seldom in Punjabi. The words “ Sub tun khatarnaak hunda hai” (Everything is dangerous) strike a chord in many at a time of unmitigated suffering for the common man. At the bottom of every slogan is the word “Paash”.

Paash is the pen name of Avtar Singh Sandhu, the Punjabi poet who could rouse people with his words just as efficiently as he could draw peaceful rural imagery. He died at the hands of Khalistani extremists in 1988, aged 38. His crime? He confronted the terrorists with the written word. His bold imagery set him apart from others, and the early influence of Naxalites on him seeps through his works. He rejected popular notions of nationalism in a poem following misbehaviour with Sikhs on the roads of Punjab during the 1982 Asian Games. The poem, titled “A Petition for Disinheritance”, created a stir. He was called the most vicious of names and even branded a radical. Sushma Swaraj had, as an opposition leader, dubbed Paash “a Naxalite poet”.

His was a voice of protest, the engine of dreams. He spoke up against state terrorism and the terrorism of extremists. Little wonder he had to shift to the United States at the height of the insurgency in Punjab in the 1980s following threats from Khalistanis. He was visiting his native village in Ludhiana when Khalistani terrorists killed him. Ironically, that was to be the last day of his visit.

Paash is back in the public consciousness today, thanks to the Rashtriya Swayamsewak Sangh (RSS) ideologue Dinanath Batra, who continues tirelessly to get non-Hindutva voices out of academia and textbooks. First, Batra focussed on removing the legendary Urdu poet Ghalib’s couplets from textbooks. Then he turned his attention to Rabindranath Tagore. Now, he has reserved his ire for Paash, the only Punjabi poet to be translated into Hindi for schoolgoing students. Paash’s voice against fundamentalism is sought to be muzzled. Incidentally, a little more than a decade ago, the Hindi translation of Paash’s popular poem “Sabh Tun Khatarnak” (The Most Dangerous) was included in a textbook for Class XI students. The poem, with its rich philosophical overtones, speaks against oppression in society, an oppression that threatens to take away the power to dream.

Batra had demanded the removal of the poem from National Council of Educational Research and Training (NCERT) textbooks as it could “pollute” young minds. Well, if obfuscation was on his mind, he has not succeeded, as Paash now occupies prime space at public squares not just in Delhi but also in places like Jaipur and Chandigarh. And students of Delhi University are planning to join hands with their counterparts from Panjab University and Jamia Millia Islamia to stage a series of programmes in a three-day Mahotsav towards the end of the year. Meanwhile, the Haryana government has quietly closed the Paash library in Karnal.

The controversy around one of his poems would have amused Paash. Throughout his brief life, he was seldom away from controversy. His intrepid ways and his revolutionary words were never ignored. Born in Jalandhar in 1950, he penned Loh Katha (Tale of Iron, 1970), which had a strident anti-establishment tone, enough for the government to charge him with murder. He was acquitted a couple of years later. The time spent in jail did nothing to douse the fire. Paash soon joined Punjab’s Maoist struggle. A little later, he became part of the Anti-47 Front in the U.S. and opposed Khalistani violence. None of these acts would have gone down well with conformists or even the advocates of Khalistan then.

Nearly 30 years after his death, Paash continues to get attention for what he stood for. Says Prof. Chaman Lal, who has been associated with Jawaharlal Nehru University’s Centre of Indian Languages: “Paash was a progressive Punjabi poet, a product of the 1970s Left radical period. He became instantly popular with his first collection, Loh Katha, [which he wrote] at the age of 20. The freshness of rural imagery in his poetry gave him a distinctive look.”

What is surprising is that nearly three decades after he breathed his last, Paash continues to be anathema to the RSS. “Paash is anathema to the RSS as any progressive writer with artistic depth is. The RSS, or any other religious fundamentalists like the Khalistanis, have no sense of either literary merit or any other aesthetics. Any progressive writer or idea in literature or other arts becomes anathema to them, just as M.F. Husain was targeted by these people. As Paash’s poetry is a voice against oppression and religious fundamentalism of all hues, the RSS wants to keep him away from young minds,” says Lal, who translated Paash’s complete poetry into Hindi and was awarded the Translation Prize by the Sahitya Akademi. Incidentally, he returned the award, along with other authors and poets, in protest against the climate of intolerance in the country a couple of years ago.

Lal believes the RSS’ objection to Paash in textbooks stems from ignorance. Paash is taught in many universities. His works have been translated into most Indian languages, including Malayalam, Telugu, Marathi, Bengali and Gujarati. Incidentally, the University Grants Commission, too, had recommended Paash for its model course as one of the important Indian voices in the world of poetry, when A.B. Vajpayee was the Prime Minister.

If Batra does succeed in getting the NCERT to remove Paash’s poem, a voice against oppression will fall silent. And, as Lal sums it up: “The younger generation in schools will be deprived of a humanist orientation of mind.” Batra’s five-page note recommending the omission of Paash should not be taken lightly. In the past, he, along with the RSS-afiliated Shiksha Sanskriti Utthan Niyas, had succeeded in getting A.K. Ramanujan’s book Three Hundred Ramayanas removed from the syllabus of Delhi University. The book questioned the popular notion of the Ramayana being a singular monolithic epic of Hinduism. Batra was also instrumental in the withdrawal of the American Indologist Wendy Doniger’s The Hindus: An Alternative History from the market.

If Paash’s poem meets a similar fate though, perhaps he himself would not have complained. After all, he has been put in the company of M.F. Husain, Rabindranath Tagore and Ghalib.