Padmavati – Marathi Play Had Not Sparked Any Protests 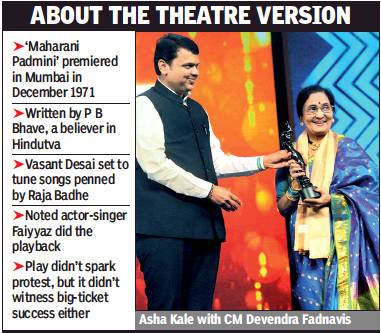 Mumbai: Asha Kale’s landline hasn’t stopped buzzing ever since the ‘Padmavati’ row erupted. The noted actor’s friends and admirers want her to recall ‘Maharani Padmini,’ a Marathi play in which she essayed the iconic Chittor queen. “I am happy Marathis still remember ‘Maharani Padmini,’” Kale told TOI on Thursday. Written by P B Bhave, whose loyalty to Hindutva, it was said, often impinged on his near-impeccable literary credentials, the play chiefly views the Padmini-Allauddin Khilji faceoff through the prism of religion.

Premiered in Mumbai in December 1971, ‘Maharani Padmini’ coincided with the rise of the Shiv Sena; veterans are quick to point out Padmini’s soliloquies had not-so-faint echoes of Bal Thackeray’s outburst against “anti-national” Muslims. Yet the Congress, which then reigned supreme, struck a balance between politics and the arts, said Shantaram Mankame, a theatre aficionado. “The ‘Ghashiram Kotwal’ controversy of the 1970s pales before the present madness over ‘Padmavati,’” he said.

Kale remembers the rigorous schedule that Bhave and director Purushottam Darvhekar planned for her preceding the premiere. “Rehearsals went on for three months. Bhave’s highly Sanskritised lines were difficult to remember, leave alone mouthing them with emotions,” she said. “Bhave told me I should show the dignity of Padmini who, he said, had 12 children when Khilji set eyes on her,” said Kale. Was she ever told Padmini may have been the imagination of a Sufi poet? “No, I was told she was a true person, a brave queen.”

Preparations were elaborate: master make-up artist Pandharinath Jukar was on board and Padmini’s sequined ‘ghagras’ and Khilji’s robes were designed by craftsmen of V Shantaram’s Raj Kamal Studios. Vasant Desai set to tune songs penned by Raja Badhe, while noted actor-singer Faiyyaz did the playback.

“The song when Padmini’s friends prepare her for the final act, the self-immolation, was moving,” said Faiyyaz. Sets were lavish and producer Prabhakar Panshikar, who played Khilji, was liberal with funds. Shashikant Nikte, a National School of Drama alumni, portrayed Ratansinh Rawal, Padmini’s husband.

“The play demanded intensity and understanding. I was barely in my 20s and I’d be nervous at the start of every show. But soon I got fond of Padmavati. I am sure Deepika Padukone too felt the same,” said Kale. “TOI wrote a rave review and praised my role too,” she added.

Yet the play hardly created ripples in the cultural and political domain. While it luckily didn’t spark protest, it didn’t witness big-ticket success either. After 90 performances, Panshikar decided to stop the play for financial reasons. And no one has been talking about it since then, except its brief revival which too bombed. Kale thinks people may have found it “punishing” to sit through a 4.5-hour performance. But, according to a prominent theatre person, Bhave’s anti-Islam rant and lop-sided view of history must have left Marathi connoisseurs cold.

Kale is surprised the Rajput community is up in arms against ‘Padmavati.’ “Maharashtra has by and large adhered to tolerance and creative freedom. Protest has to be peaceful and within the framework of law,” she said.