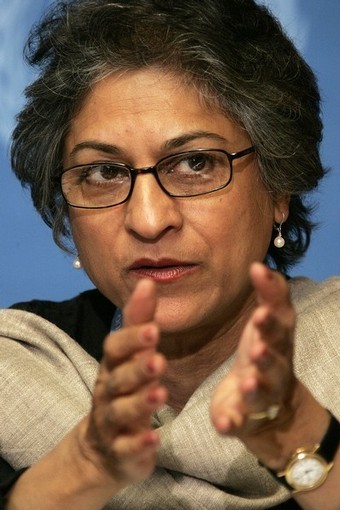 Human rights watch, June 6, 2012-
Pakistani authorities should urgently and thoroughly investigate the alleged plot against Asma Jahangir and hold all those responsible to account, regardless of position or rank. A threat against Jahangir is a threat to all those in Pakistan who struggle for human rights and the rule of law.
Ali Dayan Hasan, Pakistan director at Human Rights Watch

(New York) – The Pakistani government should investigate allegations that elements in the Pakistani military and intelligence agencies have plotted to kill the prominent human rights activist Asma Jahangir, Human Rights Watch said. Jahangir made the allegation in a television interview on June 4, 2012.

Jahangir is globally recognized for her human rights work and is one of Pakistan’s most respected rights activists. She is credited with establishing the highly regarded independent Human Rights Commission of Pakistan and AGHS Legal Aid, the first free legal aid center in Pakistan. In a career as a human rights activist spanning 30 years, Jahangir has been a consistent critic of human rights violations by the Pakistani military and the intelligence services.

“Pakistani authorities should urgently and thoroughly investigate the alleged plot against Asma Jahangir and hold all those responsible to account, regardless of position or rank,” said Ali Dayan Hasan, Pakistan director at Human Rights Watch. “A threat against Jahangir is a threat to all those in Pakistan who struggle for human rights and the rule of law.”

Jahangir told Pakistani media on June 4 that she had discovered through a “security leak” brought to her attention by a “highly credible” source that an assassination attempt was being planned against her from “the highest levels of the security establishment.” She said that she believed it was best to go public with the information because she feared that she might be killed and a member of her family framed for the murder.

In recent months, Jahangir has been at odds with the Pakistani military in a series of high profile stand-offs. In November 2011, Husain Haqqani, Pakistan’s ambassador to the United States, was forced by the Pakistani military to resign his position after allegations that he was responsible for a secret memo delivered to senior US military officials seeking support for Pakistani civilian control of national security policy. As defense lawyer in the “Memogate” affair, Jahangir raised serious reservations about lack of due process in legal proceedings against Haqqani and threats to his life from the military Inter-Services Intelligence (ISI). Jahangir has also been a critic of the military’s policies in the insurgency-hit province of Balochistan, where it is accused of widespread killings, enforced disappearances, and torture.

Jahangir has frequently been the target of harassment and threats over the course of her career, Human Rights Watch said. She was placed under house arrest by Gen. Pervez Musharraf, the military ruler at the time, after he imposed emergency rule in 2007. She played a prominent role in the “lawyers movement” in Pakistan, which led to Musharraf’s ouster and to the restoration to office of Supreme Court Chief Justice Iftikhar Muhammad Chaudhry.

In 2010, Jahangir became the first woman to lead the Supreme Court Bar Association, Pakistan’s most influential forum for lawyers. During her campaign for the Supreme Court Bar Association, Jahangir repeatedly received threats for raising issues such as corruption in the legal arena. Extremist groups and allied Pakistani media ran a campaign accusing Jahangir of apostasy – a capital offense in Pakistan – and urging lawyers not to vote for her.

The involvement of the military and its intelligence agencies in high-profile killings is well-documented, Human Rights Watch said. In April 2010, a three-member UN inquiry commission into the December 2007 assassination of Prime Minister Benazir Bhutto concluded that Pakistani authorities failed to provide Bhutto adequate security and that elements within the military may have played a role in her assassination. The panel was highly critical of the “pervasive role” played by the ISI in the events leading up to the assassination. In May 2011, Saleem Shahzad, a reporter for the Hong Kong-based Asia Times Online and the Italian news agency Adnkronos International, was tortured and killed after receiving repeated and direct threats from the ISI.

“Governments that have lauded Jahangir’s human rights advocacy both in Pakistan and internationally should be alarmed by this alleged plot and press for a prompt and persistent investigation,” Hasan said