Pakistan: Why we can’t rid society of weapons 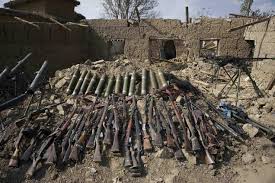 
With each blast, massacre and killing, Pakistan as a state, fails one more time. How many citizens will be slaughtered or blown apart by militants before our delusion gives way to reality? Pakistan stubbornly continues to live in a state of denial, refusing to acknowledge that it is being brutally attacked by a bloodthirsty enemy from within and without. Already driven to the wall, the only mindless response that the state has to offer is yet more barriers, check posts, bunkers, statements and resolutions. To many, it is still not obvious that we are on a suicidal path and unless we can take proactive and radical measures, the violence could only conclude in total collapse of the state.

The problem is not beyond the institutional capacity of Pakistan. The state has never made a serious, consolidated and scientific attempt to combat violence. The well-protected ruling class operating out of Constitution Avenue does not seem inclined to put their money where their mouth is. Consider the facts to understand how a ruling elite can themselves be the biggest reason for the promotion of crime and militancy in Pakistan.

The Supreme Court, in its suo-motu case 16/2011, concluded that the federal government issued 46,114 licences of prohibited bore and 1,202,470 licences of non-prohibited bore in the past five years. Not to be left behind, the Sindh government admitted to issuing another 400,000 gun licences. It was equally incredible to read reports of the grant of 69,000 prohibited bore licences to the members of the National Assembly — an average of over 300 lethal licences per “peace-loving” MNA. Raja Pervez Ashraf, defying the Election Commission’s ban, gifted 288 weapon licences to his party workers. Even the most benign looking “caretaker” prime minister, hours before his departure from the PM House, approved one prohibited and four non-prohibited bore gun licences for himself and his cabinet ministers.

What is overlooked is that the distribution of millions of gun licences (intended as bribe) is only partly reflected in official records. Little is known of millions of licences that were faked, sold illegally, not documented or simply issued and the registers declared as lost. Fake gun dealers, using fake documents, procured thousands of prohibited bore gun licences and sold them in the open market for up to Rs100,000 each. In May 2013, two NADRA directors were arrested for their connivance in issuing illegal arms licences. The racket of the licence issuance process was exposed by five Karachi citizens who, in January 2013, used their “right to information” to demand full details of all weapons issued by the federal and the provincial governments since 2001. That information was illegally concealed and has not been provided so far.

So, when the new PM orders a review of 34,000 weapons licences, he is only scratching the tip of the iceberg. The recently announced ban on the issuance of new weapon licences is equally superficial as there are already enough of them around to kill every Pakistani twice and yet be available for other errands.

Pakistan’s survival is deeply linked to its capacity for taking a number of urgent, forceful, well-coordinated and well-planned measures. Begin by striking down the Arms Ordinance. Withdraw all gun licences and announce a phased programme for the surrender of all weapons. No individual, regardless of rank or status, must be allowed to issue, use, possess, carry or display a weapon or explosive of any class. Break the link between vehicles and militancy by registering (or alternatively impounding) thousands of vehicles that are smuggled, stolen, or do not carry the standard officially issued number plates. These are the ones that are engaged in crime, kidnapping, smuggling and bomb blasts.

All this can no longer be possible by the police or the Rangers. It may be inevitable to task the army to undertake this massive operation — to purge the country of all kinds of weapons, their possessors, suppliers and sponsors. Will the ruling elite and the political parties continue to remain a hurdle in the path of peace by their unwillingness to say farewell to their own armouries?

The writer [Naeem Sadiq] is a health, safety and environment consultant
Published in The Express Tribune, July 18th, 2013