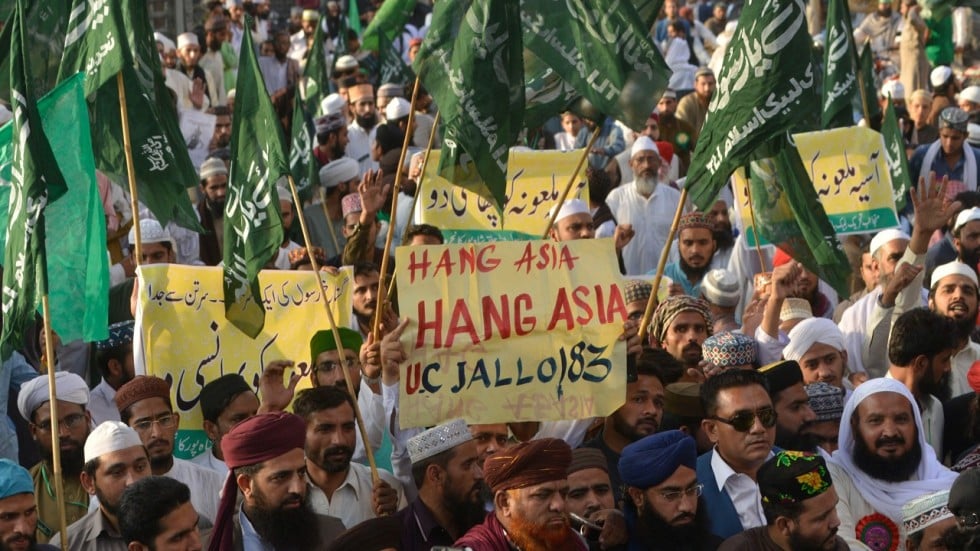 Blasphemy is an incendiary charge in deeply conservative Muslim Pakistan, where even unproven allegations of insulting Islam and its Prophet Mohammed can provoke death at the hands of vigilantes – and the acquittal immediately sparked large protests from hardliners.

Bibi appeared to be in state of disbelief after hearing that Pakistan’s Chief Justice Saqib Nisar had quashed her conviction nearly eight years after she was first sentenced to death.

“I can’t believe what I am hearing, will I go out now? Will they let me out, really?” Bibi said by phone from prison after the ruling.

Demonstrations broke out in major cities across the country following the verdict, with around a thousand club-wielding demonstrators blocking Islamabad’s main highway as several roads in the port city of Karachi were barricaded by protesters sparking chaotic traffic jams.

One of the most vocal groups leading the protests – the Tehreek-e-Labaik Pakistan (TLP) – called for “mutiny” against the army’s top brass following the verdict.

“The Muslim generals of the army, it is their responsibility that they should launch a rebellion against these generals,” Afzal Qadri – a TLP leader – told supporters in Lahore.

But the acquittal was met with near silence on the country’s airwaves as broadcasters appeared to be steering clear of covering the controversial topic. 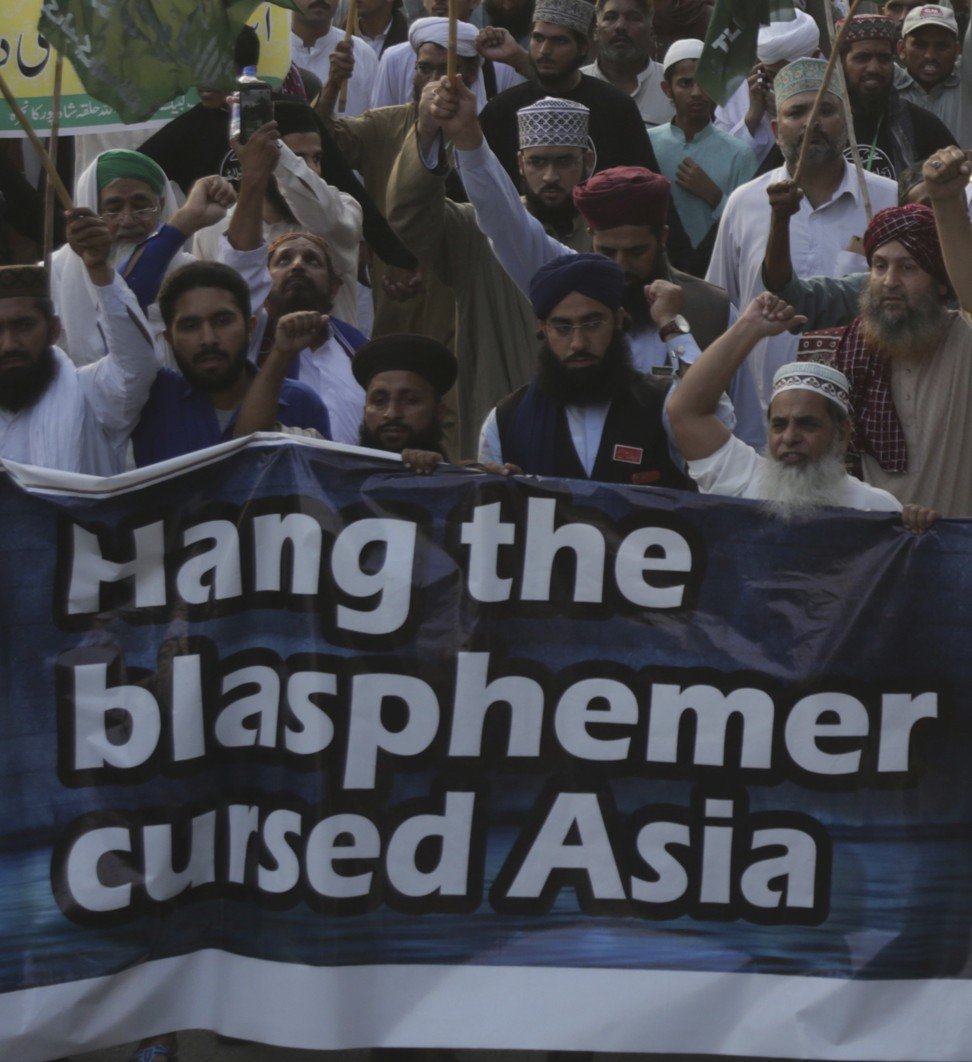 Bibi was set to be released immediately according to the court, although there was no word if any security arrangements were being made for her protection.

Her legal team celebrated the court’s decision amid beefed-up security in Islamabad.

“The verdict has shown that the poor, the minorities and the lowest segments of society can get justice in this country despite its shortcomings,” Bibi’s lawyer Saif-ul-Mulook said.

“This is the biggest and happiest day of my life.”

Her case drew the attention of international rights groups and swiftly became the most high-profile in the country.

Pope Benedict XVI called for her release in 2010, while in 2015 her daughter met his successor and the current head of the Catholic Church, Pope Francis.

Freedom for Bibi in Pakistan, where university students have been lynched and Christians burned in ovens over blasphemy claims, means a life under threat by hardliners, who regularly hold demonstrations calling for her execution.

If there is any attempt to hand her over to a foreign country, there will be terrible consequences
TEHREEK-E-LABAIK PAKISTAN

The allegations against Bibi date back to 2009, when Muslim women she was labouring with in a field objected to sharing water with her because she was Christian.

After an argument, the women went to a local cleric and accused Bibi of blasphemy against the Prophet Mohammed, a charge punishable by death under colonial-era legislation.

During the appeal hearing on October 8, a three-member panel of Supreme Court justices appeared to question the case against her, with Justice Asif Saeed Khan Khosa, considered Pakistan’s top expert in criminal law, listing flaws in the proceedings.

“I don’t see any derogatory remarks vis-à-vis the holy Koran as per the FIR,” added Chief Justice Saqib Nisar, referring to the initial complaint filed in the case.

Around 40 people are believed to be on death row or serving a life sentence in Pakistan for blasphemy, according to a 2018 report by the United States Commission on International Religious Freedom.

Leading rights groups have long criticised the legislation, saying it is routinely abused to justify censorship, persecution, and even murder of minorities.

In recent years, it has also been weaponised to smear dissenters and politicians.

Mere calls to reform the law have provoked violence, most notably the assassination of Salmaan Taseer, the governor of Pakistan’s most populous province Punjab, by his own bodyguard in broad daylight in Islamabad in 2011. 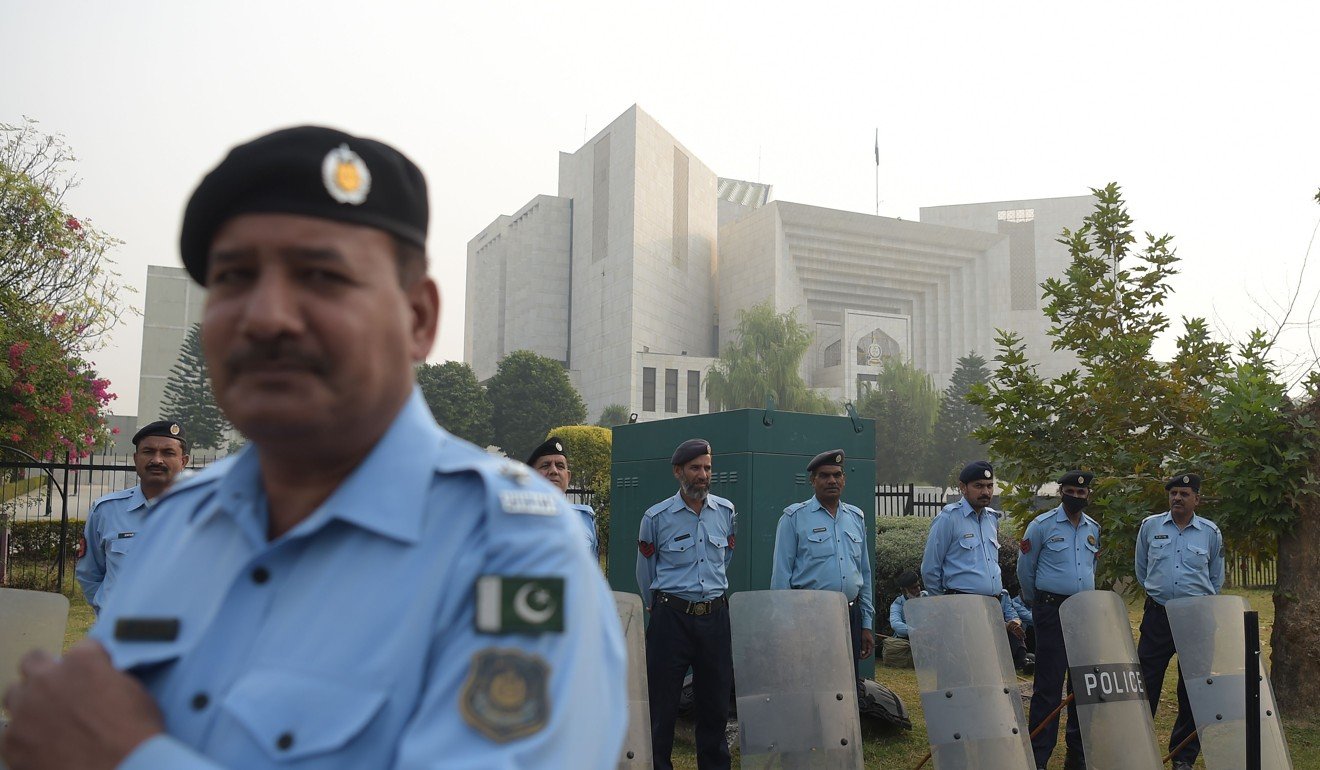 Taseer had also called for Bibi’s release. His assassin, Mumtaz Qadri, was executed in 2016 and has been feted as a hero by hardliners, with a shrine to him built by Islamists just outside the capital.

Politicians including new Prime Minister Imran Khan invoked blasphemy during a general election this summer, vowing to defend the laws.

Analysts have warned the tactic could deepen sectarian fractures and potentially spill into violence.

This article appeared in the South China Morning Post print edition as: Christian woman on death row for blasphemy is freed