GAZA: Samira Toman has gone from self-taught student to teacher.

“I’ve been doing embroidery for almost 40 years,” the 55-year-old mother of nine told The Electronic Intifada.

“I learned how to use needle and thread at school. I used to buy floss and fabric with my pocket money to practice with my sisters at home.”

She has put her skills to good use. Gaza remains mired in dire economic straits, isolated from the world by an Israeli blockade, with “stubbornly high” levels of unemployment and still suffering the consequences of three brutal military assaults over the past 10 years. 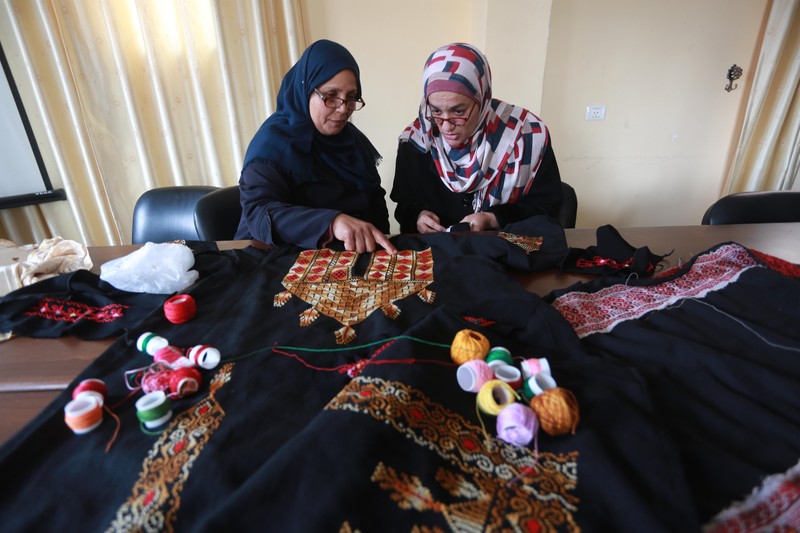 But life goes on and, for some, necessity has proven the mother of invention. Toman has drawn on Palestinian heritage to create a small embroidery business that has seen her not only exhibit around Gaza, but begin workshops to teach others in the impoverished coastal strip.

“Embroidery helped me financially,” Toman, who lives in the al-Zaytoun neighborhood of Gaza City, said. “My husband was a laborer in Israel before 2000. Since then, he has been working at a small grocery which is not very profitable. I’ve done my best to help raise our children.”

Toman also pointed to the importance of cross-stitch embroidery as a part of her heritage.

“I can’t imagine my life without this. I taught my five daughters how to sew. Even one of my sons is interested and he is very good at it. We should teach our children how to preserve our culture because it’s the only proof of our historical existence on this land.”

Since 2008, Toman has been exhibiting her products around Gaza, and she is enjoying a growing reputation among local institutions and traditional clothes shops.

She has been aided by the Women’s Affairs Center, a nonprofit group dedicated to helping women in Gaza improve their skills and recognize their potential. In addition to exhibiting her clothes, the center has also provided her a room where Toman has begun teaching others the art of embroidery.

The classes have been a success. Last year, almost 40 people learned how to embroider and have started their own personal projects, she said.

“I strongly believe in my message. I teach women how to be artists. I help them learn a simple skill that may improve their economic situation. In addition, spending hours working with needle and thread relaxes us and helps us forget the pressure.”

For Anam Siyam, 62, embroidery was a part of her job as an arts teacher until her retirement two years ago.

An allergy prevented her from pursuing her passion for sculpture in marble and clay. Instead, she turned to sewing.

“It’s cleaner, simpler and doesn’t require a lot of equipment; just a needle and thread.” 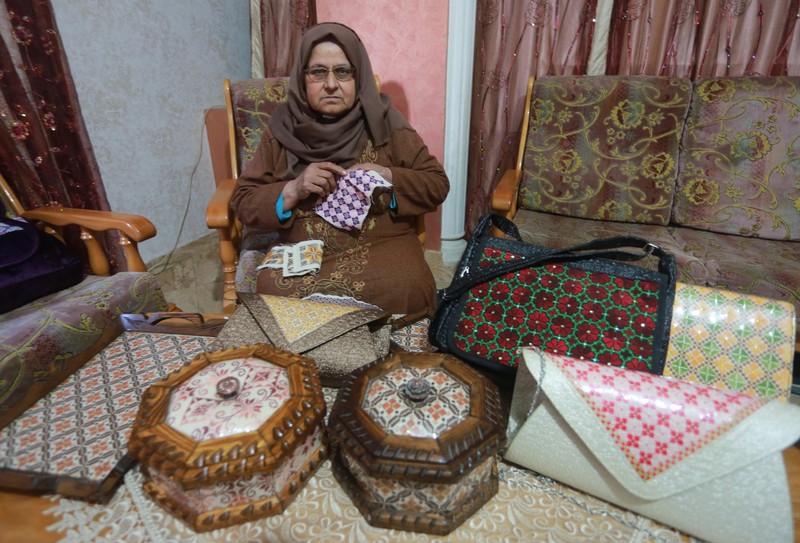 Anam Siyam, a retired teacher, does embroidery at home.

According to Siyam, there is good demand for traditional clothes despite their higher price.

“We noticed that some tailors started to use sewing machines to make clothes with traditional [embroidery] designs. Although that is three times cheaper than handmade products, people prefer ours,” she said. “People appreciate the art and believe in its beauty as a part of our heritage.”

Siyam and her five daughters try to market their products on social media as well as directly among relatives and neighbors in the Sheikh Radwan area of Gaza City where they live. And her daughters are fully supportive.

“My mother didn’t accept the idea of staying at home without doing anything,” said Amina, 21, Anam’s youngest daughter. “For her, it’s not about profit or money, it’s her passion. We do our best to encourage her and to market her products just to help her do what she likes.”

When Tasneem Shalayel, 23, traveled last summer to the United States to participate in a management training course, she was amazed by the variety of doughnuts offered everywhere.

“I would eat doughnuts during breaks, and I was surprised by how many diverse flavors and shapes there were.”

Shalayel asked her American friends about doughnuts. She also went to restaurants and asked chefs for recipes and other tricks of the trade.

Last October, after getting back to Gaza, she decided to make doughnuts in her family’s kitchen in the Tel al-Hawa area of Gaza City. She used social media to market her creations and, she said, people’s reactions were encouraging.

Then, after graduating – Shalayel earned a bachelor’s degree in business administration from Al-Azhar University – she took the idea further, though only to “enjoy my free time doing something I like.”

“I decided to make doughnuts at home and sell them online. My family encouraged me. I chose doughnuts because I learned how to make them in America, and I can be creative with different shapes and toppings.”

For Shalayel, making doughnuts is about design more than baking. With a talent for painting, she creates colorful doughnuts using any ingredients available in Gaza.

Her social media following has exploded as a result. And with the project meeting some success, the young entrepreneur – who eventually wants to earn a master’s degree in international business management – is now looking to expand.

“I’m happy it’s working. I look forward to adding pizza and cinnamon rolls to my menu.”

As a child, Nermin al-Dimiati, 30, was so fascinated by fashion shows on TV that by the time she graduated from high school, she wanted to study fashion design. But there was no such course in Gaza, and she wound up studying history and archaeology instead.

But she never gave up on her dream.

“In 2013, I started to design clothes in my room after taking a one-year design diploma. My customers were my neighbors and relatives,” al-Dimiati said. “My family encouraged me and believed in my talent.

A year later, al-Dimiati put on her first exhibition at a local hotel for clothing designed specifically to go with thehijab or headscarf. The success of the exhibition persuaded her to continue and to open her own workshop.

“Opening the workshop was a very important step. Nowadays, I have customers of all ages. Most of them are women, because they feel comfortable dealing with me, as a woman, more than dealing with tailors, who are usually men.” 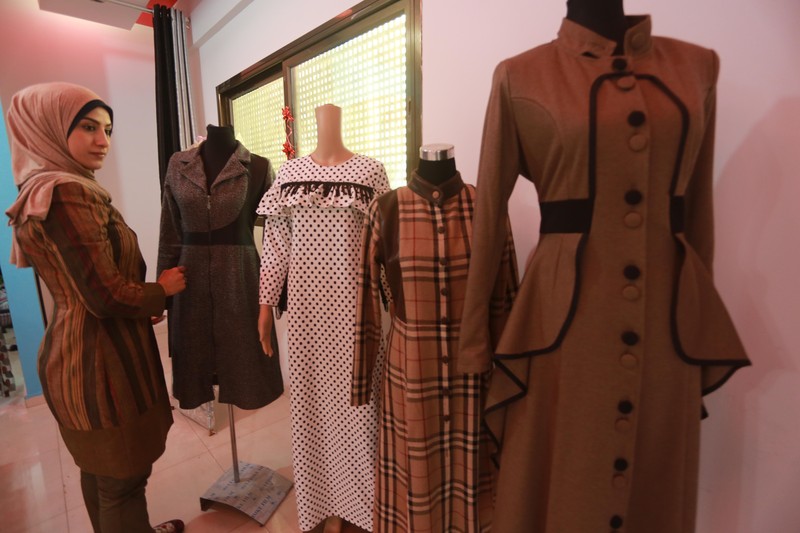 The biggest difficulty al-Dimiati has so far encountered has been to convince people that there is a difference between fashion designers and tailors, of which there is no shortage in Gaza.

“At the beginning, it was difficult, but now people have started to recognize the difference. I’m really happy with the new culture and art we are creating in Gaza. A lot of my colleagues started calling themselves fashion designers rather than tailors. It’s good for our profession.”

Marriage has not dimmed Al-Dimiati’s ambitions. She says it has encouraged her to improve herself and to try for even greater success.

“Since my marriage, my husband played a very important role in encouraging and supporting me. A lot of women in Gaza give up their dreams after getting married and having families, but it wasn’t my case.”

Al-Dimiati dreams of opening a fashion house in Gaza to look after and improve the talents of other aspiring designers. She also hopes to secure opportunities for local designers to travel abroad and get more experience.

“Four years ago, I was working alone in my room. Now, I have a workshop with more than six tailors. I will do my best to help other talented designers achieve their dreams.”

(Mousa Tawfiq is a journalist based in Gaza. Electronic Intifada)

Do you know 15 women helped to draft the Constitution of India ? #WomensDay
Pakistan- Run for your life
#Rape- Castration is not the right legal response #Vaw #Torture
SC panel slams Rajasthan govt, orders mining ban in areas near Sariska