Pandit Jasraj – 28 January 1930 – 17 August 2020
Pandit Jasraj, who passed away on Monday after a cardiac arrest, probably did more than any other musician in recent times to broaden the appeal of Hindustani classical vocal music without compromising on the genre’s core principles.

His star power came from his silken voice and emotion-laden renditions. But his towering influence also stemmed from his dedication as a guru, encouragement to fellow musicians and young students, optimism about the future of classical music and broadmindedness. He was like a force of nature, singing till his very last breath.

He was in New Jersey, in the US, when he died, a little after 5 am, surrounded by a few students. For several years, he had spent six months of the year in the US, teaching students at the more than half a dozen schools he ran. He was 90, and even at that age adapted to new technology, teaching over Zoom and giving at least three online concerts since March. “He was doing what he loved till the very end,” said Durga Jasraj, his daughter.

His voice immediately melted hearts. He had a huge repertoire, and his renditions of raags, whether well-known ones like Bihag and Darbari or more esoteric ones such as Nagdhwani and Nat Narayani, had so much emotive appeal that they could sweep lay listeners off their feet. An example of his immense ability to marry grammar with sentiment are his renditions of the composition Mata Kalika in Raag Adana, whose lyrics were composed by the Maharana Jaywant Singh Waghela of the Sanand Durbar, where Jasraj was resident as a teenager, and tune set by his elder brother Pandit Maniram.

He learnt vocal music from Maniram, and the tabla from the next eldest brother Pratap Narayan. The story goes that he was accompanying vocalist Kumar Gandharva on the tabla. A few members of the audience took objection to Kumar Gandharva’s idiosyncratic treatment of raag Bhimpalas. When Jasraj rose to his defence, a listener told him he should stick to playing the tabla. Jasraj then vowed he would become a vocalist.

Jasraj went on to singlehandedly establish the Mewati style of singing and popularise it, and also taught a whole generation of students, such as Sanjeev Abhayankar, Rattan Mohan Sharma, Pritam Bhattacharya, Ankita Joshi and Tripti Mukherjee. 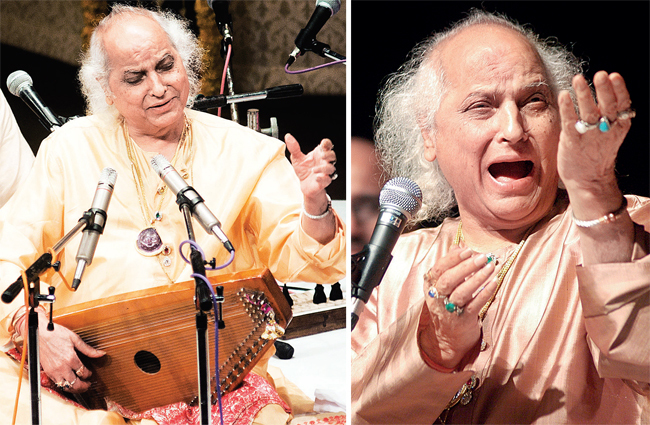 NCPA MUMBAI
Jasraj gave huge importance to the meaning of the words in khayal, something that was considered too literal by some musicians. This made him even more determined to cement his reputation as a khayal artiste, vowing to never present the thumri form in public, although many who have heard him vouch that he was a consummate performer of that form too.

He also pioneered the Jasrangi form, which enabled male and female singers to sing together at their own natural pitches by transposing the male singer’s base ‘sa’ to the female’s ‘ma’. Ashwini Bhide Desphande, a leading Jaipur gharana singer, presented this form with Sanjeev Abhyankar, Jasraj’s student. “I was from a different gharana, but he was so generous to think of including me.”

Jasraj did not think it infra dig to present devotional music, which he sang with the same seriousness that he presented raags. Indeed, my devotional songs are raag based and I sing raags with great devotion, he would say, at once demolishing the genre-based hierarchies. Haveli sangeet was another genre that he excelled at.

Ulhas Kashalkar, whom Jasraj greatly admired, also testifies to Jasraj’s large-heartedness. After a concert of Kashalkar’s in Pune, Jasraj, who was in the audience, spontaneously went up to the stage and praised the singer’s performance. “Kya taleem, kya laykari,” he said.

Shashi Vyas, a pioneering organiser, says that he could always count on Jasraj to perform even if there was not much sponsorship, and inevitably filling venues to the brim.

Such was his influence, that he even had a planet named after him. Perhaps, when we look up in the sky, we will in our mind’s ear be able to conjure up his cosmic voice.