Pandith in Srinagar & Junaid in Ballabhgarh: Comparing a Yesterday of Violence 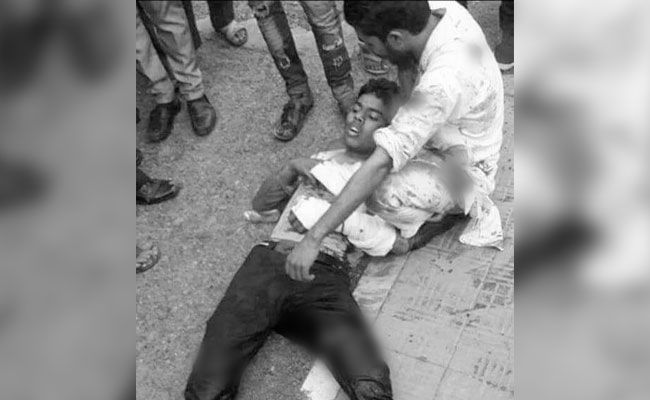 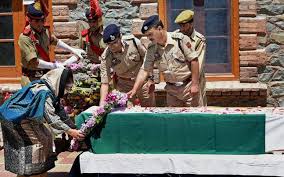 Mohammad Ayub Pandith, the Deputy Superintendent of Police of Jammu and Kashmir, was lynched to death by an irate mob of around 200 Kashmiri Muslims outside the Jamia Masjid in Srinagar yesterday. On the same day, near the National Capital Region, Hafiz Junaid, a 15-year-old Muslim, was stabbed to death and his brothers, Hashim, Shakir Mohsin and Moin, were severely injured on a train from Tughlakabad, Delhi to Ballabhgarh, Haryana. Yesterday was just one of the many days where people have been converted to statistics and India into a slaughterhouse of identities.

It is saddening to see that while one act of violence targeted at a State official was highlighted, and rightly so, by media houses; another death of a Muslim teenager on a train by a mob that attacked his religious community received mere scanty attention and concern of the online press on the day of the incident. The media, in effectively privileging one murder over the other, prioritized one life over another as deserving of news space. In so doing, the free media has mirrored the political tide of casual indifference where the lynching of a Muslim boy is not treated with the same degree and extent of condemnation as that of the murder of a police officer. Since when did reportage have to be qualified by the identity of the deceased?

It is about time we take stock of the reasons for and nature of the attacks to understand how identities manage anxieties of distance and difference in India. The communally charged atmosphere of Srinagar witnessed rumors of a ‘non-Muslim’ police officer guarding the Jamia Masjid during Shab-e-Qadr, night-long prayers held during Ramzan. The rumors of the deceased non-Muslim DSP being on alleged surveillance duty and clicking photographs of people spread like vengeful and frustrated fire. On the other hand, Junaid’s death was a result of an alleged argument over seatsin the passenger train, which eventually led to the attackers spewing communal slurs. One news report carries rumors of alleged beef-eating that instigated the attackers to stab and injure fellow passengers; anotherattributes the incident to a group of 15-20 people, who boarded the train at Okhla and hurled anti-Muslim comments at the four boys—mocking their dress, calling them beef-eaters, and deeming them undeserving of the train seats.

Both incidents scream hate crime and manifested themselves in the form of indefensible violence. The violence in Srinagar took the form of mob lynching as one of the assailants pierced the body of the DSP with a rodand then later dumped it in a drain. The police officer had pulled out his service revolver in self-defense and injured three in their lower limbs, but was overpowered by the strength of the aggravated mob that stripped him naked and beat him to death. Junaid was stabbed by a group of 15-20 men who carried knives on their person on a moving train. The altercation escalated as communal abuses were heaved and stabbings multiplied. The Muslim teenager was declared dead on arrival at the Civil Hospital in Palwal, while Shakir is presently admitted at the AIIMS Trauma Center, Delhi. Self-defense can take various forms, but the theoretical choice to defend oneself may not always materialize into a viable option, and the law discounts exactly that. Armed State agents always carry with them the plausibility and tools of defense that the common man may be deprived of, and this arguably raises questions on the manner in which the law of self-defense operates in our country where everyone may not be equally positioned (and equipped) to defend themselves. 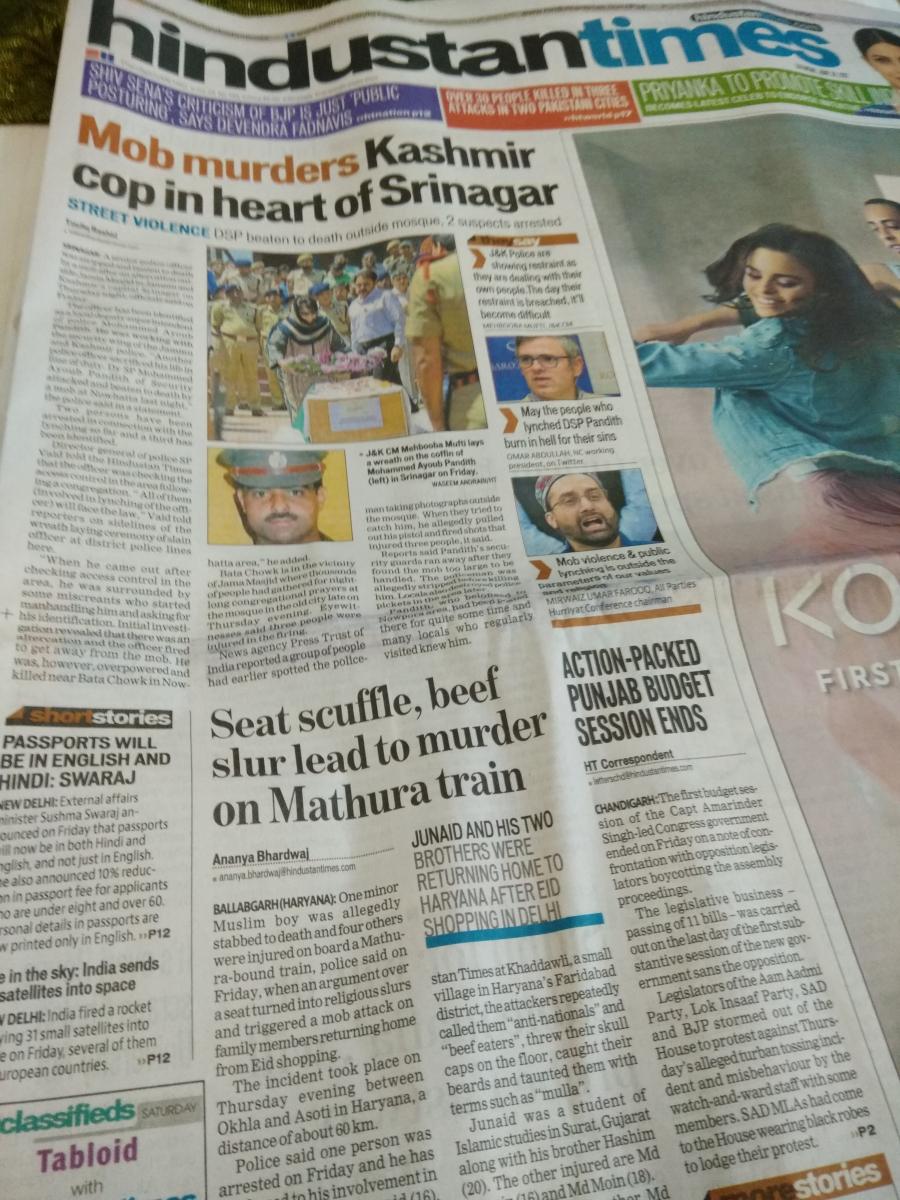 Criminal law is a field of public law and any criminal offence is deemed to be a crime against the State and society at large. It is the State’s prerogative to protect the life, liberty and security of citizens, and any offence then is a reinforcement of the failure of the State to do so. In the case of Mohammad Ayub, his rumored religion was just one of the many aspects of his identity that he shouldered as he guarded the Jamia Masjid. As an officer of the State which is perceived as an active perpetrator of violence in Kashmir, Ayub was attacked arguably for more than his ostensible religion. While the wife of the deceased DSP wailed, “Your killers will face the same fate”; Jammu and Kashmir Chief Minister Mehbooba Mufti termed the act as a “murder of trust” and hinted at how the police force cannot be exercising such restraint for too long. In an environment where the State is no longer perceived as the protector of its citizens evidenced by a history of State-sanctioned violence and brutality; the DSP’s lynching is then arguably a manifestation of an already murdered trust. Delhi (and the rest of India) then poses the daunting prospect of a Kashmir waiting to happen, as Hindu extremists and self-proclaimed cow vigilantesappropriate and/or are delegated the power to take law into their own hands. The trust deficit is further exemplified when repeated calls for help to the Government Railway Police (GRP) personnel, the police and the emergency response number were made all in vain. Surat Pal, the SHO of GRP at Ballabgarh Police Station is reported to have stated:

“One of them, Mohsin, called an ambulance when his brother was stabbed. Such things happen. Whenever there is a riot or fight, such things happen and people say some communal things, but we can’t do anything”

When State instrumentalities normalize communal violence, and when office bearers fail and/or neglect to condemn all acts of violence indiscriminately (and not merely for political or strategic purposes), some lives are effectively valued more than others. In the case of the Jamia Masjid lynching, 12 persons have been identified and five of them have been arrested as per the statement of the Director General of Police S.P. Vaid. Moreover, a Special Investigation Team has been formed to expedite the probe into the lynching of Pandith. The FIR in the case of Junaid’s death has been registered under sections 323 (voluntarily causing hurt), 324 (voluntarily causing hurt by dangerous weapons or means), 302 (murder) and 34 (common intention), Indian Penal Code, 1860. According to the Superintendent of the GRP Kamladeep Goyal, one of the assailants has been arrested and has confessed to the commission of the offence. Further, Goyal has also mentioned probing of alleged presence and complicity of one of the officers at Ballabgarsh who did nothing to save Junaid when the train stopped.

While the Chief Minister of Jammu and Kashmir Mehbooba Mufti as well as the National Conference Working President Omar Abdullah have both strongly condemned the murder of the police officer as an unimaginable travesty and the height of barbarism, scanty political attention has been drawn to condemning the act of violence on the train to Ballabhgarh. In the otherwise selectively silent violence of the ruling government, the strong condemnation of the Ballabgarh incident by Union Minister M. Venkaiah Naidu is however, welcome.

Deputy Chief Minister of Jammu and Kashmir Nirmal Singh is quoted to have said:

“I condemn it [the lynching of DSP Pandith] in the strongest words because it’s a crime. It’s a murder. The government will take it in that way and the police will take a strong action against them.”

Both, the lynching of the DSP and the stabbing of a Muslim teenager who had gone Eid shopping, are condemnable crimes. Both are murders and neither of them should attain coverage or be subjected to censure discriminately. The value and sanctity of human life cannot afford politicisation.

Vatsal Gosalia is a student (NLU Mumbai) and Vandita Khanna, a student of the Jindal Global Law School 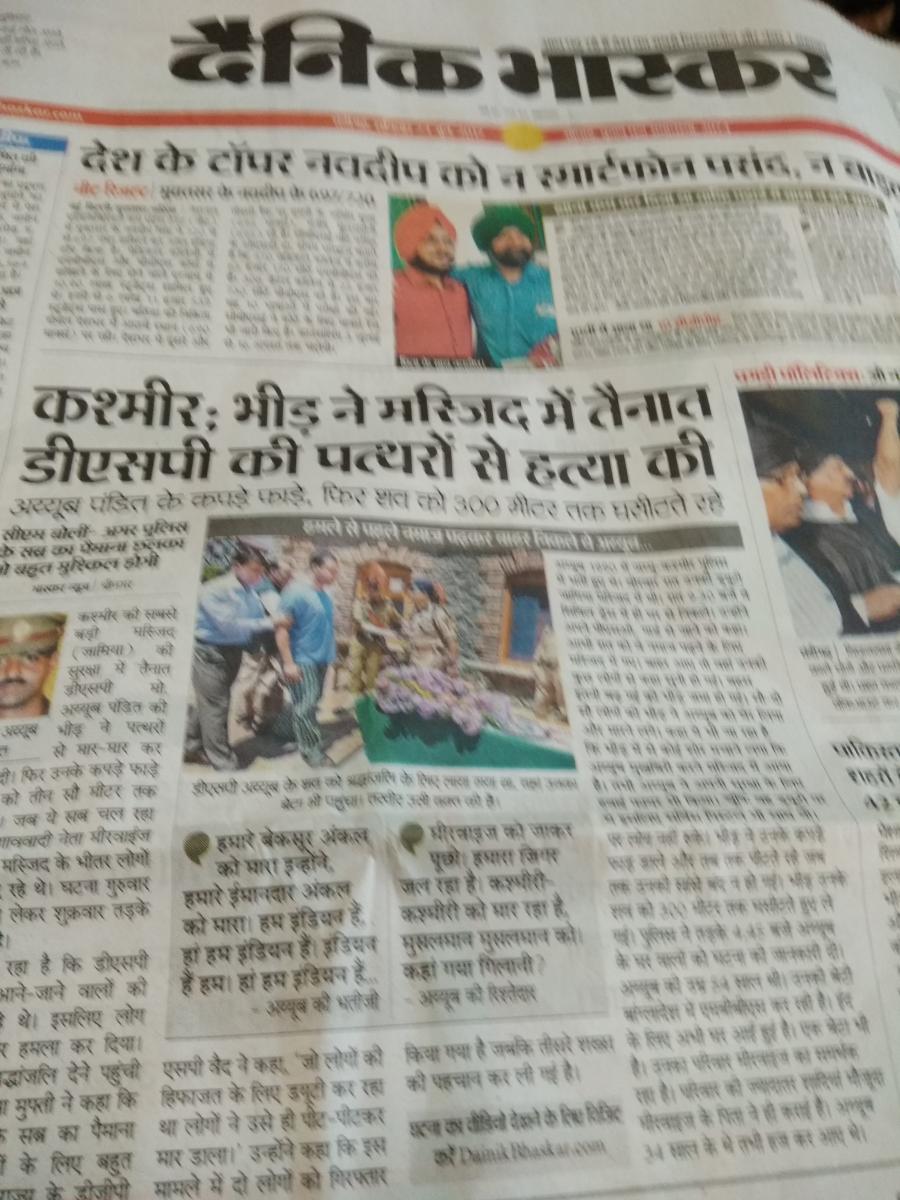