Parashuram Waghmare- The Utensil Seller who went too Far #GauriLankeshMurder 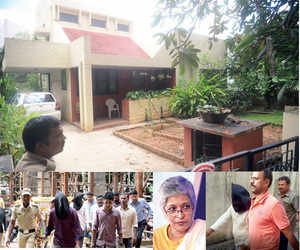 Writer-activist Gauri Lankesh was shot dead on September 5 last year ; Lankesh was killed while she was returning to her residence (above) in Bengaluru; Suchith Kumar and Amol Kale were also arrested for their alleged role in Lankesh’s murder

In tiny Basavanagar, posses of officious-looking plainclothes police officers, especially from Bengaluru, are an uncommon sight. So, when such a bunch arrived at Ashok Waghmare’s modest residence on the afternoon of June 11, neighbours peeked out of their windows and a curious crowd gathered around their home. When the Special Investigation Team (SIT) officers left the dusty village, they took with them Waghmare’s eldest son, Parashuram.

The 26-year-old, a man with bushy eyebrows and heavy stubble, is suspected to be the assassin who pumped four bullets into feisty journalist and activist Gauri Lankesh in September last year.

Waghmare’s neighbours couldn’t believe it; the local cops, too, were sceptical. Yes, he had been under the scanner since 2012 when he tried to foment communal trouble in the nearby town of Sindagi, in Vijayapura, by hoisting a Pakistani flag, and he was associated with Hindutva outfits, especially the Sri Ram Sene, but that association was mostly restricted to social causes.

“Whenever he was asked to come to the station, he would tell us, ‘Ek aur mauka do, sir’ (Please give me one more chance). He was required to come to the the station once a week back in 2012 and 2013, but since the case is old, we would keep a watch on him only occasionally,” said a senior police officer from Sindagi.

On Friday evening, though, the SIT claimed that Parashuram Waghmare had confessed to killing Lankesh. An SIT officer told this newspaper that Waghmare said “he did not kill Lankesh for money”. “He did it to protect the rights of Hindus and their religion.”

According to the police, on September 5 last year, Waghmare said he rode pillion with a stranger to Lankesh’s residence and opened fire at her, as he was instructed. He returned to Vijayapura on September 6. Waghmare has also reportedly claimed that Amol Kale from Pune, who was known to Waghmare as ‘Bhaisab’ had directed him to come to Bengaluru to stay for about a week and execute the plan.

Waghmare stayed at a rented residence near Sunkadakatte near Magadi Road during his Bengaluru visit.

In the coming weeks, several theories will be floated about Parashuram’s motivations for his alleged crime, and there will be several loose ends that would need to be tied up, but what is striking, though, say law enforcement agencies, is this pattern of young directionless men being radicalized by what they believe to be an underground group of extremists with a pan-Indian presence.

According to a senior SIT official, Lankesh, as well as rationalists MM Kalburgi and Govind Pansare, were assassinated by an underground group of radicals, one among many, who despite having links with various fringe right-wing outfits, appeared to operate on their own, and lured drifters and goaded them to commit crimes after systematically indoctrinating them.

“KT Naveen Kumar, the first person to be arrested in the Gauri Lankesh case, was spotted at a spiritual seminar organised at Ponda, in Goa, and Waghmare was spotted at a seminar at Vijayapura. The group to which they belong has a very rigid hierarchical structure. The plotting is done by three to four people, while information is shared with the rest on a need-to-know basis,” said the SIT official. If the SIT’s claim regarding Parashuram’s confession is indeed true, he appears to have been the right candidate.

Ashok Waghmare, who sold cooking utensils, migrated to Basavanagar from Lingasagur, in Raichur, in late 2011. His son, then barely out of his teens, was already an active Hindu activist. He tried his hand at various things over the years, including helping his father with his utensils business, but failed to stick to any job, and these included working with an agency that promoted the Pradhan Mantri Jan Dhan Yojana in Sindagi, to being a computer operator. But what he was more interested in, say cops from Singadi, was organizing social events and tournaments. Most people in the town and his village knew him as a “soft-spoken, god-fearing man”. Cops in Bengaluru suspect that he often visited Vijayapura to cement his contacts with right-wing outfits. “But, as of now, we have confirmed that he was personally not associated with Sanatan Sanstha and Hindu Jana Jagruti Samiti,“ said an SIT official. According to police records, Waghmare was unemployed when he allegedly killed Lankesh. KT Naveen Kumar, the first person to be arrested in the Lankesh murder case, sold pump sets in Maddur; and the rest of the men chargesheeted in the case – seven in all – were small-time businessmen, or unemployed. The SIT told this newspaper that Amol Kale from Pune, Amit Degwekar from Goa and Manohar Edave Vijayapura were the main conspirators along with Dada alias Nihal who is absconding. Suchith Kumar alias Praveen from Shivamogga was in charge of logistics, while Naveen Kumar was his accomplice.

Parashuram was reportedly roped in, in as late as August last year, and only met up with Kale, Degwekar and Edave.

Kale was reportedly associated with Hindu Jana Jagruti Samiti in Pune, while Amit Degwekar was extensively probed in connection with the 2009 Margaon blast. The SIT is presently of the opinion that the main plotters behind the Gauri Lankesh murder are based either in Goa or Maharashtra. Potential shooters are given an air gun and taken for target practice before they are called to a safe house in the target’s city before the final recce and murder.

On Saturday, Ashok Waghmare cut a lonely figure, as he waited for his turn to be grilled in connection with his son’s arrest at the SIT’s office in Bangalore. “My son has not done it, he is innocent,” said Waghmare, breaking into a loud wail.

Parashuram was a religious man, but it was never an obsession, he claimed. Parashuram’s close friend, Rakesh Math, who was arrested along with him in 2012 for creating communal trouble in Sindagi, was also grilled by the SIT.

According to Nikam Prakash Amrit, Superintendent of Police, Vijayapura district, Waghmare was more closely associated with Sri Ram Sene in Bijapur than it would seem. But Sri Ram Sene founder Pramod Mutalik told this newspaper that he was a member of the RSS till 2012.

“Waghmare has no links with Sri Ram Sene,” Mutalik said before ending the call.