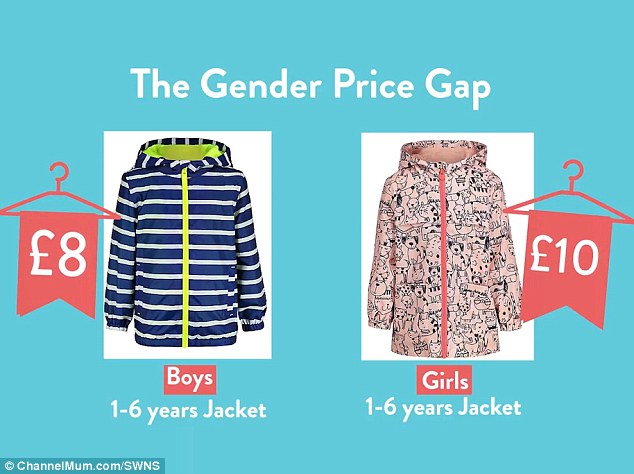 Dubbed ‘pink tax’, stores have been found to charge more for almost identical clothing depending on gender

Parents are regularly forking out more for clothes and toys aimed at girls than boys, a study has found.

Two-thirds of parents have noticed a kids ‘gender pay gap’ with stores charging more for almost identical items depending on whether it is targeted at girls or boys.

The price gap begins when children are as young as 12 months, with 71 per cent of parents who have seen a difference claiming those with girls are forced to pay more.

The research, carried out by parenting site ChannelMum.com ahead of International Women’s Day on 8 March, found a blue and green striped jacket from George at Asda costs £8-£9 for one-to-six-year-olds while a similar jacket in pink costs £10-£12 in the same store.

When it comes to underwear, a pack of boy’s briefs in Marks and Spencer will set parents back £4-£7, while the same number of girl’s briefs will amount to £6-£8.

Girls aren’t always paying more, as a pair of white skinny jeans from River Island are priced at £20 for boys but just £16 for girls.

Parents noticed that boys are also charged more for shoes and jeans.

Fifty-eight per cent of parents think they have to pay more for accessories aimed at young girls, and 52 per cent believe the cost of a girl’s coat is often higher than one for a boy.

T-shirts and tops, nightwear, and underwear, are also among the items of clothing parents believe are priced higher for girls.

On average, girls’ items were priced at 21 per cent higher than the equivalent item for boys, but the items where boys were charged more averaged just 13.5 per cent more expensive.

Previous studies have shown adult women are regularly charged more for items ranging from razors to dry cleaning in a move called the ‘pink tax’ – with the same average price gap of 21 per cent as female toddlers and young girls.

MPs have debated clamping down on the practice for adults and now a huge 97 per cent of the 1,156 parents polled by ChannelMum.com want gender-based pricing for children’s items stamped out too, with 55 percent calling for it to be made illegal.

Almost three in five think gender pricing is a ‘rip off’ by retailers designed to hit parents, with 55 per cent claiming stores believe parents will pay more for girls’ items.

A further 56 per cent believe retailers make it difficult to compare prices by dividing items into ‘boys’ and ‘girls’ sections. More than a third say they would back moves to make all kids’ items ‘gender-neutral’.

What’s the price difference between girls’ and boys’ items?

Commenting on the price differences, Sophie Johnson, lecturer in fashion business and promotion at Birmingham City University, said: ‘Gender equality is as poignant as ever in the fashion and retail industry and has been a controversial topic of conversation in recent years.

‘As an industry that strives and protests for equality, it’s sad to see retailers placing pressure on the children’s wear market, influencing consumer inequality from such a young age.

She added: ‘However, it is very difficult to do clear like-for-like comparisons on gender differentiated products. Maybe it should be suggested as part of retailers’ strategies to equalise this in the future.’

Sophie also explained how genderless clothing is beginning to trickle down into the children’s wear market, which she believes will have a ‘positive impact’ in the future.

Previous studies have shown adult women are regularly charged more for items ranging from razors to dry cleaning in a move called the ‘pink tax’ – with the same average price gap of 21 per cent as female toddlers and young girls.

MPs have debated clamping down on the practice for adults and now a huge 97 per cent of the 1,156 parents polled by ChannelMum.com want gender-based pricing for children’s items stamped out too.

Fifty-five per cent are calling for it to be made illegal, while 42 per cent back a voluntary code of conduct for retailers and manufacturers.

Almost three in five believe gender pricing is simply a ‘rip off’ by retailers designed to hit parents, with 55 per cent claiming stores believe parents will pay more for girls’ items.

A further 56 per cent believe retailers make it difficult to compare prices by dividing items into ‘boys’ and ‘girls’ sections, with 37 per cent saying they would back moves to make all kids’ items ‘gender-neutral’.

However, 15 per cent also believe stores are beginning to end gender-pricing discrimination as parents are becoming wise to the practice.

‘The so-called ‘pink tax’ is bad enough for adult women but a pink tax for tots is just plain wrong.

‘There’s simply no justification for charging more based on gender. An item which is the same or similar should have the same or a similar price tag, regardless of which gender wears or uses it.

‘Luckily parents are becoming more and more aware of the practise which should mean more firms becoming reluctant to do it.’

A spokesperson for Marks and Spencer said the child’s pants aren’t comparable because they aren’t like-for-like products as the boys’ pants are plain and the girls’ pants are patterned.

River Island said the £4 price difference between ‘white ripped skinny jeans’ is because the boys’ pair comes with a keyring.

Asda denied its pricing is based on gender, with a spokesperson explaining: ‘Parents know they can trust us to offer a great range of kids clothing at amazing prices.

‘The price of our clothing is influenced by many factors, but never by gender.’

Argos said its roller skates were not gendered at all. A spokesperson explained: ‘They’re not boys or girls products they are simply different colours.

‘Customers will notice price differences in different products. These are for different reasons. This could be a range of different factors.

Clarks stated that the two shoes were not a ‘like-for-like’ comparison.

Matalan has not yet responded to a request for comment.

What is the pink tax?

Research from last year revealed that British women were still being charged more for their toiletries than men.

A basic pre-holiday shop at a high street chemist for items like razors, deodorant and shampoo set female customers back 21 per cent more than men on average.

The survey compared prices at Boots, although many other retailers have been previously criticised on this issue.

The products compared in the study included two Gilette shave gels – women’s Pure and Delicate at £3.55 for 200ml, and Fusion ProGlide at £2.49 for 250ml – and a Nivea women’s anti-perspirant that costs £2.50 compared to a similar men’s aerosol at £2.

A spokesperson for Boots claimed at the time that such products ‘are not the same based on ingredient, formulation and use, so can’t be compared on price.’

The Indian Academy of Paediatrics (IAP)’s reforms: transformative or cosmetic? #medicalethics
A Citizen Stands With Victim Of Communal Bullying #IStandWithYou
When an Army jawan gave a ‘Modi bhakt’ a stinging lesson on what soldiers do for country
Press Release: Condemn police firing in Sonbhadra on #AmbedkarJayanti #WTFnews