Patient Served Meal On Floor In Ranchi Hospital, Was Told ‘No Plates’ #WTFnews 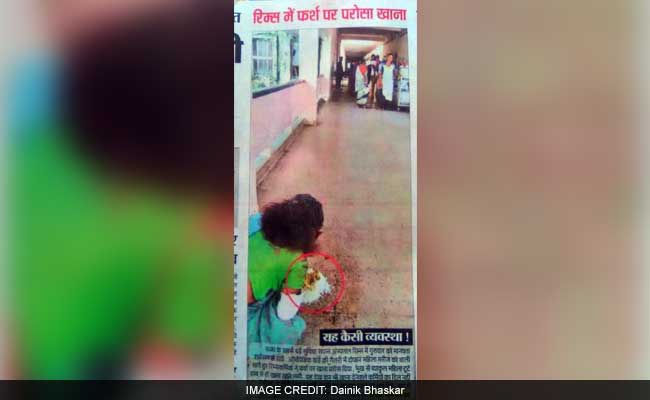 RANCHI:  In one of the most disturbing visuals to surface in the middle of a debate over poor facilities in hospitals across the country, a patient eats food straight from the floor of a hospital ward in Jharkhand capital Ranchi.

The horrific visual was captured by the newspaper Dainik Bhaskar at the state’s biggest government hospital, the Ranchi Institute of Medical Sciences.

Palmati Devi, her arms wrapped in bandage, ate her meal of rice, dal and vegetables that ward boys served on the floor on Wednesday.

A patient at the orthopaedic ward, Palmati Devi didn’t have her own plate and had asked for one, but was rudely told off by kitchen staff who said there were none at the large hospital that has an annual budget of Rs. 300 crore.

“It’s not a common practice but we have started an inquiry and will take action those who served the food on the floor and then forced her to eat from there,”  BL Sherwal, the hospital’s Director, told NDTV.

The state of hospitals and how patients are treated came under intense media glare after a poor tribal in Odisha, Dana Majhi, walked 10 km carrying his dead wife’s body on his shoulder after being denied hearse facilities.http://www.ndtv.com/india-news/patient-served-meal-on-floor-in-ranchi-hospital-was-told-no-plates-1465415?pfrom=home-lateststories

India - Repeal all draconian laws and Stop Operation GreenHunt
The grand delusion of Digital India
Islam Will Not Teach My Son That Wife Beating's OK
Forced to Marry at 16, she killed her husband in self -defense , is facing #DeathPenalty #JusticeFo...