People’s poet, a voice of resistance, Rahat Indori who tested positive for Covid-19, passes away 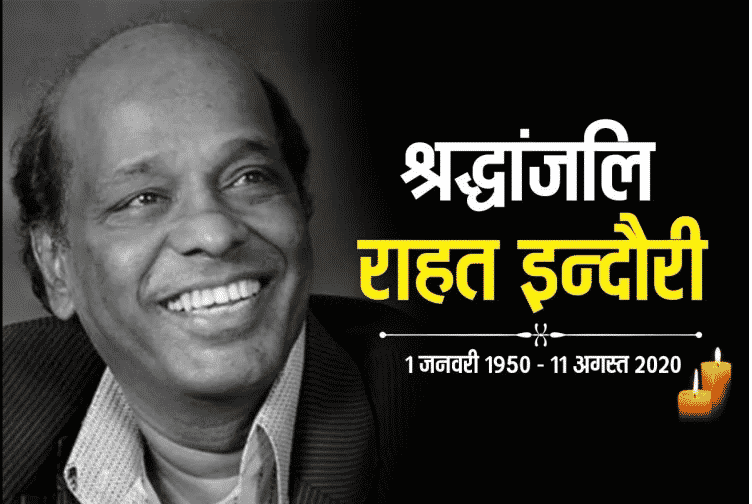 By Shams Ur Rehman Alavi

If mushairas were to be equated with cricket, then he was surely the Viv Richards of Urdu shayri.

Rahat Indori, who died in Indore on Tuesday, was one of the most prominent faces of Urdu poetry and a poet who had a rare connect with the masses, a people’s poet in the true sense. He could come and conquer a mushaira –either held in a classy auditorium or in a faraway town where thousands of people waited till midnight to listen to his poetry. His unique style of rendition always brought spark to the ‘mushaira’. The announcement that Rahat Indori was about to take over, followed by the poet’s walk towards the mike and the ‘feel’ amid the gathering — it was something that had to be experienced.

His language, imagery and the idiom had the power to captivate the gathering. And, he was a master of his craft. If mushairas were to be equated with cricket, then he was surely the Viv Richards of Urdu shayri. Cricket lovers remember the West Indian batting legend’s trademark swagger and the manner in which he would look around, before striking the ball with full fury. That was Rahat on the stage. Somewhat loud, but ably getting his point across with the audience.

Purists didn’t always appreciate, some even felt this was ‘performance’, but he knew times had changed and he often had to explain the meaning of a tough word or a particular usage before reciting a ghazal. Also, he used sarcasm when the audience failed to appreciate the nuances. On the stage, the seasoned poet’s eyes and hands moved constantly as he recited his couplets. His ‘ash’aar’ evoked roars and huge applause from the audience.

The poet with a twinkle in his eye would now be at ease, knowing that he was in command. He would recite ghazal after ghazal, and the audience would still want more. In poetry, he attacked everyone and spared no one. Sample this couplet that targeted the clergy:

Or the numerous couplets that attacked the political class, which are quoted in conversations by poetry lovers. Some couplets that became a symbol of resistance were penned long ago, when the regimes were different, but like all major poets and writers, Rahat was affected by the suffering of the common man and his poetry had a strong element of ‘confrontation’. Of course, he was a humanist.

Rahat Indori was born in Indore in 1950. A student of Islamia Karimia College, he later got his post-graduation degree from Barkatullah University in Bhopal. He had started penning poetry by 1972. By the mid-1980s, Indori was an established poet.

Rahat was well-aware of the traditions of Urdu poetry, but he kept experimenting with the language and could express romance and love in the form of couplets like:

He also wrote lyrics for several Bollywood movies. But he enjoyed mushairas, where he reigned. He travelled across the world and was immensely popular among the diaspora. After he tested positive for coronavirus, he was admitted to a hospital in his hometown, Indore, where he breathed his last. He was 70.

Rahat Indori played a remarkable role in taking Urdu poetry closer to people who had little idea about Urdu shayri, and made them fall in love with couplets. He is no more but he will live through his couplets. A couple of years ago, he had recited this couplet at a mushaira held at Lal Qila:

You’ll continue to lord over the hearts of lovers of Urdu poetry. Khuda Hafiz, Rahat sahab.

Before he checked himself into a hospital for treatment, the poet had tweeted about him being coronavirus positive, asking people to pray for his quick recovery. He further asked people to not call up either him or his home to know about his health. He had said they will be getting updates through Twitter.

Historian and author Rana Safvi termed the poet’s death a “huge huge loss to a fearless voice and to the world of poetry”.