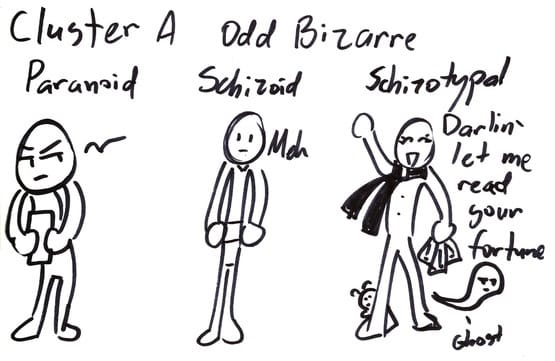 It is by far the commonest of Cluster- A, personality disorders.
Some degree of paranoid traits, in that the individual is considered ‘so not gullible’ by others , has a distrust of strangers and wants to verify things for himself is normal. Some degree of ‘hyper-vigilance’ is protective and a defense against a hostile environment, quite like pain. If there was no pain, we would hurt ourselves many times a day and die early of infected pricks and cuts and bruises, if not of bleeding. However, both pain and paranoid traits above an extremely low upper limit can make life difficult; in the latter case even for those around. An optimal degree of anxiety falls in the same category. If there was no anxiety, most of us will flunk our exams and interviews and would never get promoted. But above a low ceiling, it does the same, by too much anxiety impairing our performance. But we are drifting here.
Persons with Paranoid Personality Disorder (PPD) are unrelentingly and without any reason, suspicious and distrustful of others. It is a common disorder occurring in about 3% of people and is commoner in men than in women.

The continuous hyper-vigilance results in an inability to relax and because of the suspiciousness there is an inability to experiment with new situations or make new friends leading to a rigidness in behavior.

In the context of a relationship and marriage, it manifests as possessiveness which seems sweet, even endearing in the beginning but soon gets limiting and stifling . Spouses are expected to follow a set of rules, wives to not wear revealing dresses and not to entertain male friends or relatives when husband is not around. However, unlike in Delusional Disorder, no specific suspicion is expressed, no specific person is blamed, phones are not routinely checked and no ground rules of behavior laid down. It is just that wife has on her own found over-time that things are more harmonious between them if she sticks to these rules. Domestic violence is common particularly when it gets combined with alcoholism.

There is a strong tendency to blame others. Even neutral happenings are perceived as fraught with meaning and possibly referring specifically to him. There are ideas of reference in new situations; when he enters a restaurant, people exchange glances. But unlike in Delusional disorder, by the time he settles, he is only half sure.

Most of the happenings from individual to global are explained in a complicated long-winded conspiratorial fashion interspersed with the phrase, ‘not many people know that’ or something similar.
People with paranoid personality disorder can be querulous and markedly litigious, they often store and even carry around files and documents ; there is also something called ‘ paranoid-litigious’ personality.

These persons are aloof and not interested in social relationships or elaborate social niceties. The change is first noticed in teenagers as excessive shyness; the young boy retreats to the room at the back when relatives or friends drop in. But many adolescents are normally shy too. It is only when the avoidance of people is progressively increasing one should think of psychopathology.
Behind the aloof and cold look there is an active fantasy life. Such people are happy as along as the spouse or rest of the family members do not put ‘excessive’ social demands on them . What they are shunning is not people but emotional closeness to people other than one or two close to them. They do form relationships but on their own terms, those terms boiling down essentially to an emotional hands-off approach at least in early phase of relationship. Intimacy scares them particularly the part requiring opening up to others. A study looking at personality disorders and internet use found that being online more hours per day predicted signs of SPD. Additionally, SPD correlated with lower phone call use and fewer Facebook friends. Wherever anonymity is assured (as a defense against the feared intimacy) like in chat rooms, persons with SPD do interact actively even more than others.

This was earlier known as Latent or Borderline Schizophrenia and is an even more aloof version of SPD with paranoid features. It frequently requires medication.