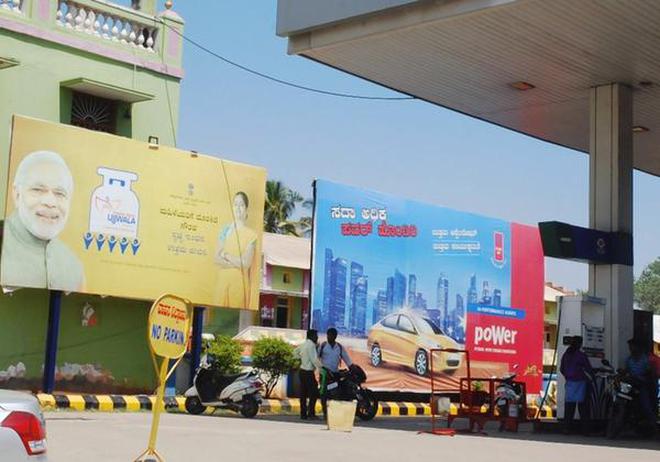 A hoarding on the Centre’s Ujjwala LPG scheme with the PM’s picture at a fuel outlet in Karnataka.

“They are asking us to display the picture of Prime Minister Narendra Modi in retail outlets and those who refuse are threatened with blocking of supplies,,” S.S. Gogi, president, Consortium of Indian Petroleum Dealers (CIPD) told The Hindu.

The instruction is being conveyed by area officers of the companies, who visit the retail outlets, according to the dealers. The suggested displays include one on the scheme to provide LPG connections to Below Poverty Line families. The dealer consortium said there was no written communication, and instructions were coming from the territory manager and sales officers of the companies.

Recently, the CIPD refused to share personal data of its employees with the oil companies, and many of them alleged that the government was profiling them on caste and religious lines.

The personal data was sought through a form sent to the dealers in the first week on June. “They are asking for sensitive personal information like caste, religion and constituency of the employees. Such data collection by the government is a breach of privacy. We are going to court,” said Mr. Gogi.

On June 11, CIPD wrote a letter of protest to OMCs describing the initiative as a violation of fundamental rights. The Petrol Pump Dealers Association of Punjab has issued a legal notice to senior executives of IOCL, HPCL and BPCL on the issue.

An OMC official confirmed that the information was sought as the government required it for the Recognition of Prior Learning scheme under the PM’s Skill Development Ministry. The OMCs did not respond to an email sent on Thursday.

After SC verdict, Jodhpur woman receives triple talaq over phone
After Four Months, Protest by Farmers Continue : No End in Sight
Shocking, vulnerabilities of minor girls raped and have no one to go to
Kerala - Affordable health care gets major push